Babytree is now looking for 2.2 billion Hong Kong dollars ($281 million) in gross proceeds, against an initial goal of $1 billion. Tongcheng-Elong Holdings too has chopped its target from close to $1 billion to $232 million.

This week Biel Crystal Manufactory, a Chinese iPhone supplier, told South China Morning Post that it would postpone its $1.5 billion IPO due to adverse market conditions.

The moves raise concerns that investor appetite may be beginning to fade for Hong Kong listings, after the tech stock rout earlier this year. They follow a series of disappointing flotations in Hong Kong this year. Many have fallen below their offer prices on the first day of trading, and some major tech stocks are currently trading below their IPO prices.

Earlier this year Hong Kong had seen a jump in listings as start-ups backed away from a tougher regulatory regime in China. However this growth could now slow. Trade tension between China and the U.S. is also a major concern which is "making investors more cautious of investing in Chinese companies," said Kiyoshi Ishigane, Chief Strategist of Mitsubishi UFJ Kokusai Asset Management. "This could affect the number of IPOs in the long run," he added. 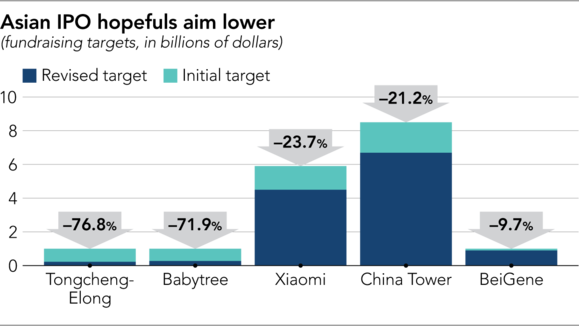 Jim McCafferty, head of equity research Asia ex-Japan at Nomura in Hong Kong, noted that the underperformance of recent IPOs was expected to result in companies delaying listings until market conditions improved, reducing the amount of capital they are seeking to raise, or cutting the amount of shares they are selling into the market.

“There does appear to be evidence that a lot of companies are raising private capital, so I think that investors’ appetite for public markets is weaker than has been historically,” McCafferty said.

The growing caution about Hong Kong IPOs comes as the number of listings by Asian companies overall has fallen sharply this year, a decline driven by a sharp drop in the number of mainland Chinese listings. Ernst & Young Global cites a total of 480 as of September, down more than 30% on the year.

For comparison, 1,074 Asian companies carried out IPOs last year, the most since 1996, according to the Organization for Economic Cooperation and Development. China accounted for 45% of the total and has been the biggest source of IPOs over the past decade, exceeding U.S. companies by almost 170%.

However, the number of companies coming to market this year in mainland China has plunged by 75% as of September, with only 86 listings. Proceeds slumped more than 30% to $17.8 billion.

Shenzhen -- home to some of the world's biggest tech companies, including Tencent -- had been the IPO leader in 2017 with 222. It saw only 34 up to this September.

Xiaomi, the world's fourth-largest smartphone maker, went public in July, only to see its shares drop more than 2% at opening and fall close to 6% at one point during the session. The stock is still languishing significantly below the offer price.

The ongoing U.S.-China trade dispute has weighed on Chinese economic growth and hit its stock benchmarks hard. The government, fearing an imbalance in market supply and demand, has been clamping down on IPOs by enforcing stricter criteria, such as a weighted voting rights structure and an update on rules regarding pre-profit biotech companies that took effect in April. "The government wants to enhance their investor protection measures, and has been more rigorous about pricing," said Kyoya Okazawa, head of institutional clients and global markets in the Asia-Pacific at BNP Paribas Hong Kong. Additionally, there has been a crackdown on debt-heavy companies seeking to raise capital by going public.

Companies unsatisfied with their pricing prospects or aiming to avoid the mainland's rules have been rushing to list in Hong Kong instead, lifting the number of IPOs in the first nine months of this year.

They also face a growing waiting list on the mainland, with nearly 300 companies in the China Securities Regulatory Commission's pipeline.

According to Ernst & Young Global, Hong Kong's IPO count jumped 44% to 153 during the January-September period. Proceeds nearly doubled to $29.4 billion, boosted by listings of large-scale unicorns -- startups valued at $1 billion or more.

However the rise in Hong Kong listings has not been significant enough to offset the decline in mainland exchanges.

Meanwhile, rising U.S. interest rates have been pulling money out of Asia's emerging markets overall. Thailand, the Philippines and Singapore are among the countries experiencing IPO slowdowns this year.

Many investors remain wary about the outlook for global stocks amid continuing uncertainty over the relationship between Washington and Beijing, which could spur more companies to rethink listing plans or cut their IPO size.