HONG KONG -- A flock of Chinese companies is attempting to push ahead with close to $1 billion-worth of initial public offerings in New York, shrugging off hurdles put in place by regulators in Beijing and Washington to curtail such share sales.

The share sale applications by companies come in spite of a declaration by Gary Gensler, chair of the U.S. Securities and Exchange Commission, in a video posted to YouTube on Aug. 17 that he had "put a pause, for now" on listings by companies using a popular method to get around China's foreign ownership restrictions.

Yet 11 of the 13 public registrations filed with the SEC by China-based issuers since then involve the corporate structure Gensler alluded to, according to a review by Nikkei Asia. Other Chinese companies are likely to have filed confidential sale plans that would only become public later in the approval process.

The group also includes companies which would appear to come under Beijing's new restrictions on offshore IPOs by companies involved in private education and those holding data on more than 1 million Chinese users.

One IPO aspirant, bakery group Chanson International Holding, is based in Xinjiang, where a number of companies have come under U.S. sanctions related to concerns about forced labor involving Muslim minority groups.

Most of the new wave of deals are small, but two midsized offerings -- by e-cigarette producer Aspire Global and hotel operator Atour Lifestyle Holdings -- bring the total prospective proceeds in play to $866.38 million. The success of these transactions could clear the way for bigger deals to resume, should these deals win support from the SEC and U.S. investors.

"After a few weeks' lull, engagement with clients and potential clients has shot up," said a person involved with international offerings at a global investment bank in Hong Kong. "More deals will happen but the momentum from the start of the year is certainly broken."

The first half of 2021 saw a record $12.5 billion raised in New York in initial public offerings by 34 Chinese companies. That surge came despite a U.S. law passed in December that threatens to banish mainland Chinese issuers from American exchanges by 2023 unless Beijing relaxes restrictions against foreign inspection of accounting records.

The streak, though, appeared to end after ride-sharing operator Didi Global capped the fundraising rush by raising $4.4 billion on June 30 in the biggest Chinese IPO in the U.S. since Alibaba Group Holding's 2014 offering.

Beijing authorities, annoyed by the share sale on the eve of the Chinese Communist Party's July 1 centennial celebration, responded with a flurry of measures targeted at Didi and further offshore IPOs by data-rich companies. Other new edicts focused on private education providers and food delivery services, among other sectors. 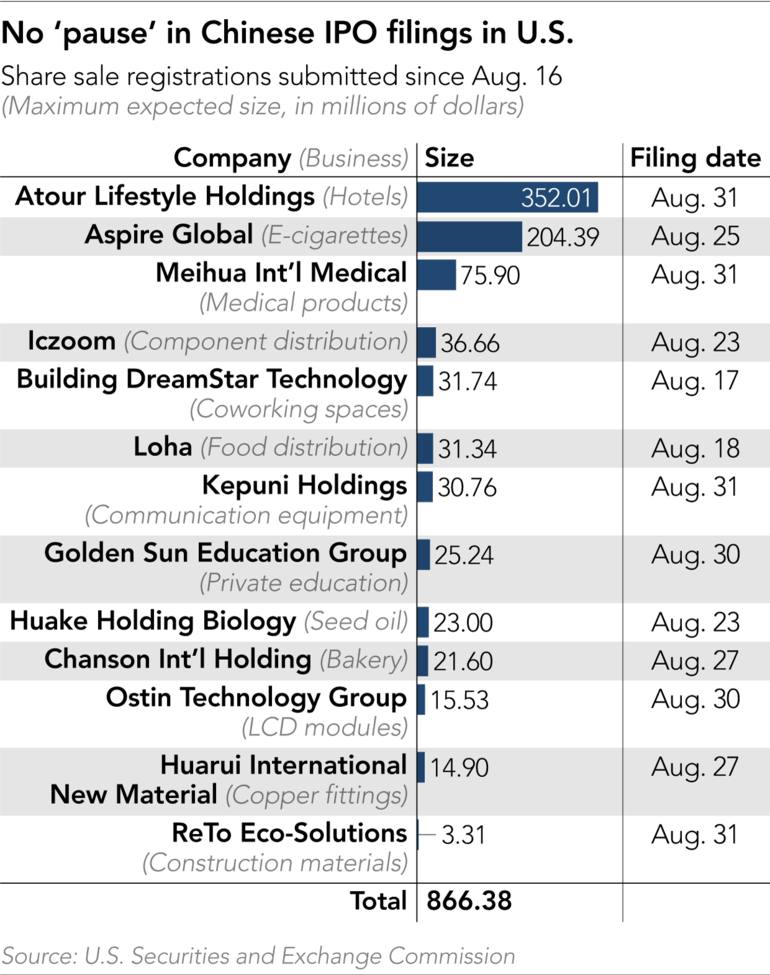 With the shares of Didi and other Chinese companies listed in New York plunging, the SEC responded to congressional calls for action initially by saying that Chinese IPO candidates would face new disclosure requirements and intense questioning, before Gensler announced the "pause."

All of the 13 share sale registrations, except that of communications equipment maker Kepuni Holdings, were initially filed before Didi's IPO. Per the SEC's comments about enhancing disclosures, these companies' updated prospectuses now alert prospective investors to specific risks on their first page.

Under a VIE structure, companies such as Alibaba Group Holding can sell shares to foreign investors even though the licenses by which they operate in China may bar foreign investment. The trick is that the corporate entity selling stock does not actually own the operating units in China, but only shares their revenues and profits through contractual arrangements.

"As a holding company with no material operations of our own, we conduct a substantial majority of our operations through our operating entities established in the People's Republic of China," Aspire said at the start of its revised filing.

Due to China's "legal restrictions on foreign ownership in any internet-related businesses we may explore and operate, we do not have any equity ownership of our VIE," it added.

"The Chinese regulatory authorities could disallow our structure, which could result in a material change in our operations and the value of our securities could decline or become worthless," it said.

Chinese regulators have never explicitly endorsed VIEs, but appeared to take little public notice of them until recently when they were indirectly referenced in regulations which went into effect Sept. 1 barring foreign investment in private preschools, elementary schools and middle schools.

This would appear to be a problem for Shanghai-based Golden Sun Education Group, which runs private primary and middle schools in the nearby city of Wenzhou, as well as tutorial centers, another area covered by new restrictions.

In its prospectus updated Aug. 30, Golden Sun said the new regulations were "silent" in regards to preexisting VIEs. But it warned that the government could find that its structure violates the new rules, with the result that it "could be subject to severe penalties including being prohibited from continuing operations." Another draft regulation released in the wake of Didi's IPO would require overseas listing candidates holding data on more than 1 million Chinese users to get approval from the Cyberspace Administration of China for their plans.

However, hotel group Atour, which has more than 27 million members in its loyalty program, said that its lawyers concluded "the draft measures were released for public comment only," with any implementation of the regulation still uncertain.

"We cannot assure you that we would not be subject to such cybersecurity review requirement, and if so, that we would be able to pass such review in relation to this offering," Atour said in its latest filing.

The highlighting of such risks is vital, according to Dan Harris, founder of U.S. law firm Harris Bricken. "The new disclosures are certainly better than the old disclosures," he said. "These VIEs are hanging by a thread."

But he and other lawyers remain skeptical about how seriously U.S. investors will take disclosures about the risks around IPO candidates and their lack of control over affiliates in China.

"I think it will have very little impact. People don't read these things," said Harris, who also invests privately himself. "I'm a lawyer but I don't read the disclosures."

Marcia Ellis, a partner with U.S. law firm Morrison Foerster in Hong Kong, said she expected the SEC would "declare a win for investors and they will move on" after improving risk disclosures, as she said happened in 2015.

For Chinese listing candidates, she said, "I don't think it's going to be a huge stumbling block."

Stephanie Tang, who works with companies on their listing plans as head of the greater China private equity practice at U.S. law firm Hogan Lovells in Hong Kong, agreed.

"Companies that can go offshore will likely keep overseas listing an option," she said, noting that many remain attracted to the possibility of higher valuations and liquidity in U.S. share markets.