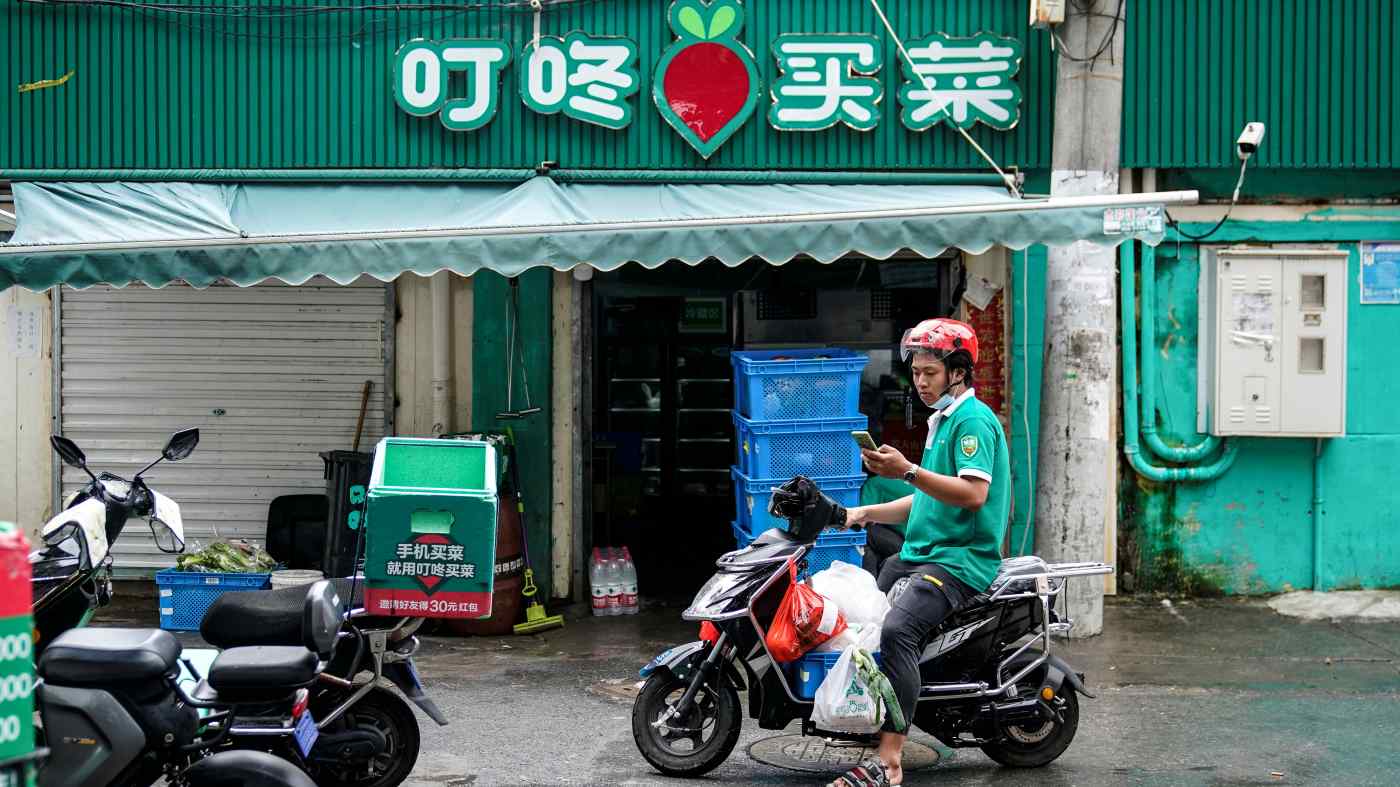 HONG KONG -- Chinese online grocery startups Missfresh and Dingdong Maicai are headed to Wall Street to boost their firepower to fend off big tech rivals in an intensifying battle over the country's vast fresh produce market.

Both companies filed applications for initial public offerings in the U.S. earlier this month, racing to become the sector's first listed Chinese company. Dingdong aims to raise up to $357 million at a valuation of about $6 billion, according to its prospectus. The company intends to fix the sale price on June 28 and start trading the next day, according to a term sheet.

Missfresh is eyeing up to $500 million from its IPO, said people familiar with its efforts.

Despite the high penetration of e-commerce in China, purchases of fresh produce and groceries largely remained offline until COVID-19 hit. The disruptions caused by the pandemic have substantially accelerated the adoption of online fresh food buying and many have continued to rely on doorstep delivery long since life largely returned to normal.

Consumers normally receive items from online retailers a few days after placing orders but Missfresh and Dingdong promise "instant" home delivery -- typically within an hour -- as they dispatch groceries from mini-warehouses designated to serve specific neighborhoods.

Their services are particularly popular among members of China's middle class in the country's largest cities who find it hard to fit in grocery shopping on their own amid busy schedules.

Dingdong, left, and Missfresh offer a wide range of grocery items on their respective apps.

Analysts expect China's online grocery market to continue to grow as urban incomes rise and logistics networks improve. But some raise concerns about the profitability of the business model due to its high operating expenses.

Last year, Chinese online sales of fresh produce reached 458.5 billion yuan ($71.1 billion) largely due to people working from home and staying in during the pandemic, up 64% from 2019, according to iResearch. The Chinese consultancy expects the market for online groceries to surpass 1 trillion yuan in 2023, with web penetration for fresh produce reaching around 20% then from less than 10% last year.

"The advantage of the mini-warehouse model is that it offers high-quality products and delivers them fast. The model caters to the demand of users in the tier-one cities," analysts at Kaiyuan Securities said in a recent research report. "But the high fulfillment costs remain a sore spot for such companies to turn a profit," they wrote, referring to costs incurred in filing orders and distributing products.

Fresh produce and agricultural products tend to have thinner profit margins because of their relatively lower prices. In China, this segment has been highly fragmented, with the majority of supplies provided by street vendors, local grocers and supermarkets. Missfresh's average order was 95 yuan in 2020, compared with 57 yuan for Dingdong Maicai during the same period. To be able to deliver fresh goods quickly, online grocers are required to maintain a large offline network and pay substantial fees to delivery drivers. As of March, Missfresh had built more than 631 warehouses in 16 cities and Dingdong had more than 950 depots in 29 cities.

"There is some concern over the evolution of this sector amid the presence of companies with deep pockets," said a person directly involved in the listing of one of the companies. "While the bigger names such as Alibaba and Pinduoduo have the wherewithal to survive a brutal price war, investors looking to invest in Missfresh and Dingdong are taking comfort from the fact these companies are backed by big names who have demonstrated their willingness to support the companies."

Despite political tensions between Washington and Beijing, the U.S. remains an attractive location for Chinese internet listings thanks to the country's broader investor base. The recent crackdown by China's securities regulator on STAR Market listings and the broader tech sector are dampening the outlook for mainland IPOs. As a result, several companies there have been forced to cancel IPO plans, which also deterred the two grocers, sources say.

The sector is also facing growing regulatory pressure in China's antimonopoly crackdown. Authorities are becoming increasingly concerned that the attempt to digitalize grocery shopping at scale could threaten local jobs and economic stability.

While Missfresh and Dingdong were not included in the five, Missfresh disclosed in its prospectus that relevant authorities are "in the process of conducting on-site inspections" on it.

Both startups warn that they may face substantial additional expenses should Chinese employment laws reclassify delivery riders as formal employees of the platforms, which would require companies to provide more benefits such as housing allowances and social insurance. Currently, most riders are hired as contractors.

"The coming months are going to be harsh and these companies aren't going to turn in a profit soon. But what they promise is a slice of the burgeoning demand in China, especially with the pandemic transforming the way Chinese buy groceries," a potential investor told Nikkei. "This model is here to stay and in the event of a consolidation, a listed vehicle in the U.S. is an attractive proposition."