Ahead of the Life Insurance Corporation of India's initial public offering on the Bombay Stock Exchange and other leading exchanges, its market share stood at 61.4% in February, as against 64% in the financial year that ended in March 2021. (Source photos by Reuters)
SAYAN CHAKRABORTY, Nikkei staff writerMarch 23, 2022 17:29 JST | India
CopyCopied

BENGALURU -- State-run behemoth Life Insurance Corporation of India (LIC) is losing ground to competitors in the run-up to its outsize public offer, the biggest ever in India.

LIC's market share stood at 61.4% in February compared with 64% in fiscal 2021 ended last March, according to the Insurance Regulatory and Development Authority of India.

The stagnation at India's largest insurance company is reflected in the 0.24% year-on-year increase in new business premiums -- payments from new policyholders -- between April 2021 and February 2022, against SBI Life's 25.18%, HDFC Life's 22.52% and ICICI Prudential Life's 18.1%.

Despite the slowdown, the total premium cornered by LIC in the past 11 months -- 1.56 trillion rupees -- was 1.6 times those of the 23 nonstate life insurance players combined.

LIC came to life in 1956 by a special act of the Indian parliament and stayed the country's sole insurance provider until 2000, when the government paved the way for private entities to set up shop in India, with a 26% cap on foreign ownership. By then, middle- and low-income groups viewed its policies, which often combined insurance coverage with bonus payouts from the company's profit pool, as a credible savings alternative to bank deposits.

Such offerings, called "participating products," accounted for 60.2% of LIC's overall premiums in fiscal 2021.

The soaring popularity of equity investments, coupled with stiff competition from nonstate players, have led to LIC losing some of its luster, particularly among high-income groups.

By LIC's own admission in its initial public offering (IPO) papers filed with the market regulators, "insurance faces stiff competition from other modes of financial savings, such as mutual funds, bank deposits and small saving instruments, besides physical savings." The company estimates that assets under management for the mutual fund industry were less than half those of the life insurance industry in fiscal 2016, but stood at 70% of the life insurance industry's assets under management by 2021. 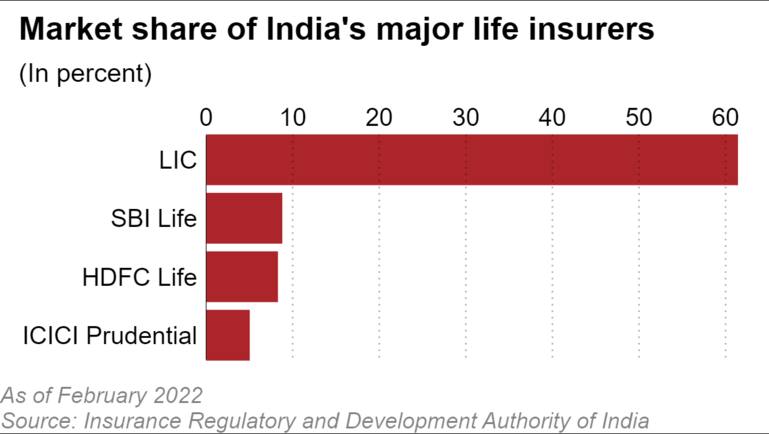 "The higher-income segments have been drifting toward private insurers, and the value migration from LIC to private companies is going to continue," said Abhishek Basumallick, founder of the investment advisory firm Intelsense.

The government's move to reduce policyholders' share of LIC's surplus funds from the current 95% to 90% by 2025 could also alienate potential customers, accelerating its slowdown, he added.

Debnarayan Banerjee, a Bengaluru-based financial services professional, does not intend to renew the LIC policy he bought a decade ago once it expires in another five years. Banerjee, who dipped his toes into equity investments a few years ago, believes mutual funds and stocks would inevitably fetch higher returns than LIC's offerings. Since he wasn't keen on "achieving any savings goal through an insurance plan," Banerjee picked a private insurer over LIC while buying term insurance for himself and his wife last year.

"LIC looked like an attractive investment bet with its bonus payouts when I bought the insurance 10 years ago when I was a couple of months into my first job," said Banerjee. "But today we have better instruments for wealth generation and savings."

Kripasindhu Behera, who works as a cook in Bengaluru, thinks otherwise. The 25-year-old owns two LIC policies -- the insurance-cum-annual-bonus variants -- and intends to buy more.

"My brother had seven" LIC policies, said Behera, who got burned in a small savings scam a few years ago. "I am aware of mutual funds but don't really know how to invest. But with LIC I know the agent personally, who helps me with buying the policies that are right for me. My money is safe with the government."

Banerjee and Behera are at opposite ends of the spectrum -- those with the wherewithal to chase high financial returns have been shying away from LIC, while those with limited means seek comfort in LIC's assured returns.

"LIC was considered a savings-cum-protection vehicle, but now savvy customers are separating savings from protection, while people who are not so savvy will opt for LIC," said Nitin Basin, co-head of institutional equities at Ambit Capital. "In smaller cities and towns, where people are intimidated to visit a bank, a government-run organization like LIC and its agent network gives them a comfort."

Bhasin added that LIC could be losing out on customers who are buying insurance for the first time.

LIC's sluggish performance, coupled with a meltdown in global markets amid Russia's invasion of Ukraine, has cast a shadow over its public listing, with the government refraining from announcing a timeline for the public flotation despite getting approval from the market regulators.

Tuhin Kanta Pandey, secretary at the Department of Investment and Public Asset Management has said the government was "watching the market situation carefully." The government is banking on the targeted 650 billion rupees in share sale proceeds to step up spending to rejuvenate India's economy and achieve growth of 8% to 8.5% in fiscal 2023.

The LIC IPO is also crucial to narrowing the gap between the government's lofty divestment goals and actual returns. It had touted divestment as a tool to pay its bills, setting a target of 2.1 trillion rupees for fiscal 2021, but managed only 328.3 billion rupees.