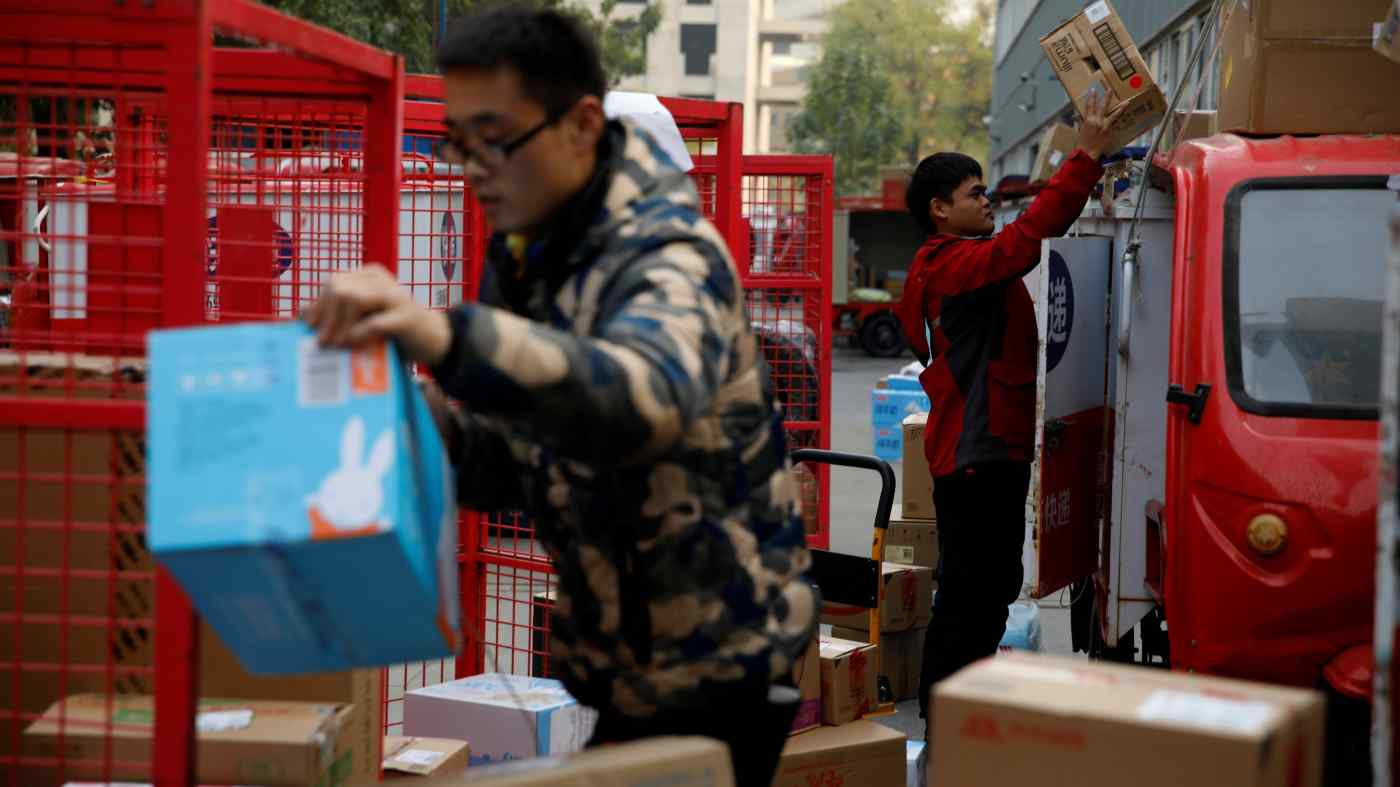 JD Logistics still gets most of its revenue from parent JD.com, but its share has fallen to just over half.    © Reuters
NARAYANAN SOMASUNDARAM, Nikkei Asia chief banking and financial correspondentMay 28, 2021 11:21 JSTUpdated on May 28, 2021 17:29 JST | Hong Kong
CopyCopied

HONG KONG -- JD Logistics rose as much as 18% in its debut Friday, providing relief for a Hong Kong new listings market that had started to show signs of fatigue.

Shares of the logistics unit of Chinese e-commerce major JD.com closed at HK$41.70 after rising as high as HK$47.75 in early trade. The stock had opened at HK$ 46.05, up from an issue price of HK$40.36. Hong Kong's Hang Seng Index ended little changed.

Hong Kong's new listings market has shown signs of cooling after its best start ever to a year. Nearly $25 billion has been raised to date, eight times the IPO total at this time in 2020.

"It is difficult for JD Logistics, with market value of over $20 billion, to have a dramatic rise," said Kenny Ng, a strategist at brokerage Everbright Sun Hung Kai in Hong Kong. "JDL is not a pure tech share and the business is mainly about logistics. I expected a 20% increase in its stock price, but now it is relatively disappointing at around 10%."

Despite the heavy subscription interest, JD Logistics priced its shares close to the low end of their marketed range. The company, aware of investor concerns about the sector with competitors posting losses, decided to keep its valuation expectations under check, a source said during the determination of the final pricing.

Twelve of the 17 companies that have listed on the Hong Kong exchange since March 1 are trading below their issue price.

At the same time, China Eastern Airlines is moving closer to listing its logistics subsidiary on the Shanghai Stock Exchange. Payments for shares in Eastern Air Logistics' 2.4 billion yuan ($376.9 million) IPO are due Friday, though no date for trading has been set.

Eastern Air Logistics net profits rose threefold last year from 2019 to 2.36 billion yuan as revenues rose 34% to 15.11 billion yuan, according to its prospectus. Proceeds of the offering will be used for building and upgrading infrastructure, including a new comprehensive air cargo logistics center at Pudong International Airport in Shanghai.

The results of the IPO are likely to affects plans by China Eastern rivals China Southern Airlines and Air China to proceed with their own logistics spinoffs.

China Eastern brought in outside investors led by Lenovo parent Legend Holdings in 2018 as part of a government program known as "mixed ownership reform." Legend's stake will slip to 18.1% after the IPO.

JD Logistics becomes the third group company with shares traded in Hong Kong. JD.com itself raised $4.5 billion last June while acquiring a secondary listing in Hong Kong to add to its primary one in New York. JD Health raised $3.9 billion in a December IPO.

The company started in 2007 as the in-house logistics unit of JD.com. According to its IPO prospectus, the share of JD Logistics' revenue coming from its parent fell to 53.8% in 2020 from 70.1% in 2018, though the volume of such transactions continued to grow, reaching 39.4 billion yuan last year.

Chief Executive Yu Yui told reporters Friday that the company will continue to grow sales to other customers at "high speed."

JD Logistics expects a higher net loss in 2021 due to accounting changes, increased expenses and reduced gross margins, the prospectus said. The company's net loss widened to 4 billion yuan in 2020 from 2.2 billion yuan a year earlier.

The company plans to use proceeds from the IPO to upgrade and expand its network and develop its technology.

"The company will continue to invest in cross-border logistics and also focus on helping Chinese brands go overseas," Yu said, with particular attention to North America and Europe.