Record pace of Chinese listings in US shows signs of strain

10 companies have fallen on debut in two-month losing streak 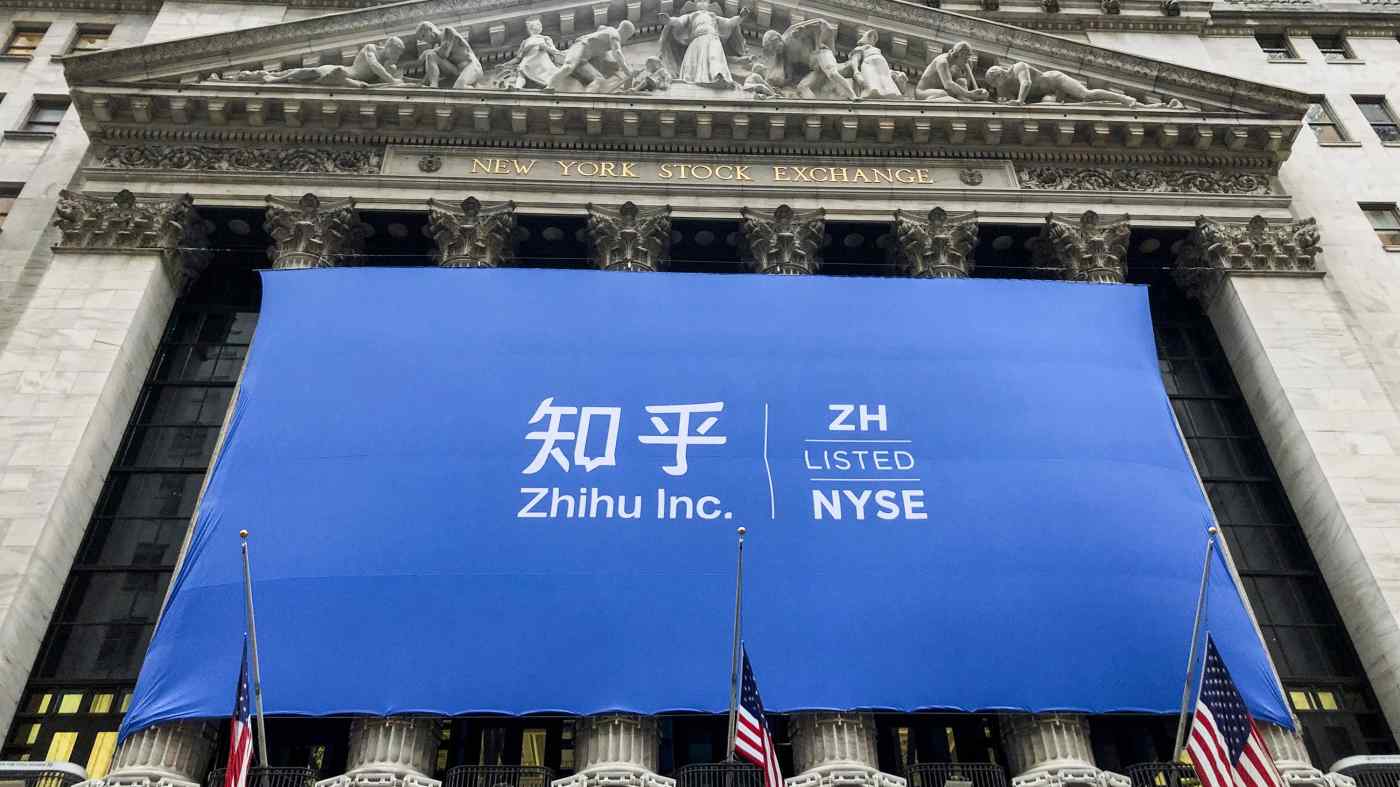 HONG KONG -- The best start to a year ever for Chinese listings on American stock exchanges is showing signs of strain.

Chinese companies raised $4.4 billion on the New York Stock Exchange and the Nasdaq Stock Market through April 7 compared with just $807 million over the same period last year, according to data compiled by Dealogic.

Yet the 10 Chinese companies that have debuted in New York since Feb. 9 have fallen on their first day of trading. Question-and-answer website Zhihu dropped 11% in its debut March 27 after pricing the $523 million offering at the bottom of its marketed range.

By comparison, 17 Chinese companies that each raised at least $100 million in U.S. IPOs last year gained 28% on their debut, according to Dealogic.

"A combination of geopolitics, concerns over valuation and fears there could be more episodes such as Archegos Capital is denting the strong start to the year for equities in general and for Chinese listings in the U.S.," said Terence Ng, co-founder of investment advisory company IJK Capital Partners in Singapore, referring to a U.S. family office which last month triggered billions in losses for banks including Nomura and Credit Suisse in fire sales of its holdings, including shares of Chinese internet companies Baidu and Tencent Holdings.

"The appetite for Chinese companies will continue as they promise continued growth. However, deal flow in the short term depends on the market sentiment," Ng said.

Waning investor demand could dampen the outlook for more than 10 companies including Ant Group-backed bike-sharing service Hello and SoftBank-backed freight company Full Truck Alliance, which are seeking collectively to raise over $8 billion, according to people familiar with the deals.

Power bank rental company Smart Share Global, which is known as Energy Monster and is backed by Alibaba Group Holding, smartphone maker Xiaomi and private equity fund Hillhouse Capital, was forced last week to halve the size of its offering to $150 million after pricing it at $8.50 a share, well below the marketed range. It slid 5.3% on its first day of trading. "Investors are turning cautious toward equities more broadly and Chinese tech names have borne the brunt of the sell-off," said a person who worked on some of the recent listings. "While there remains a lot of interest toward Chinese names given the growth prospects, investors are asking more questions. They appear to want companies to price offerings very conservatively."

Zhihu, which counts Alibaba and Tencent among its investors, priced its offering on March 26 at $9.50 a share. While the shares have recovered from their first-day slump, they are still below their IPO price, closing Thursday on the NYSE at $8.96.

Chinese companies continue to flock to the U.S. to tap its deep investor pool and in the belief that Washington and Beijing will arrive at a compromise to avert the expulsion of hundreds of Chinese companies.

Under a law passed last year by the U.S. Congress, Chinese companies risk can be kicked off American exchanges by 2023 if American regulators are not permitted to review their audit records. Beijing forbids such reviews on national security grounds. The U.S. Securities and Exchange Commission last month launched initial steps toward putting the law into force.

As of October, there were 217 Chinese companies listed on U.S. exchanges with a total market capitalization of $2.2 trillion, according to the U.S.-China Economic and Security Review Commission.

"Many advantages the U.S. market possesses over the Chinese market are long term and structural," said Tianlei Huang, research fellow at the Washington-based Peterson Institute for International Economics. "And in the calculation of those firms seeking US listings, such structural advantages may well outweigh the challenges posed by stricter auditing rules and other uncertainties in the broader US-China relations."