SEOUL -- SK, South Korea's third-largest chaebol, or family-run conglomerate, will launch a series of initial public offerings of its group companies this year.

Its pharmaceutical and chemical subsidiaries applied for preliminary listing examinations in December, and its semiconductor materials and security services companies are expected to do so this year. South Korea's chaebol operate in a wide variety of fields, and SK has the most subsidiaries among them, at 125 companies. Under the leadership of Chairman Chey Tae-won, the company has listed its subsidiaries to further expand the size of the group.

On Dec. 1, SK Bioscience applied for a preliminary review of its listing on the Korea Exchange. The company is an up-and-coming business that engages in contract manufacturing of biopharmaceuticals. It is particularly known for its vaccine culture technology, and in July it signed a contract with British pharmaceutical giant AstraZeneca to produce vaccines for the new coronavirus. The company is involved in many other vaccines as well, and it is moving forward with its IPO to raise funds to expand its production facilities in anticipation of more orders.

In South Korea, Samsung Biologics stands out as having advanced rapidly in the stock market. With a mere $1 billion in sales and just over $200 million in net profits, the company has a market capitalization of about $48 billion, making it the country's fourth-largest listed company, behind Samsung Electronics, SK Hynix and LG Chemical. Pharmaceutical stocks are getting a second look, in part because of the new coronavirus. Much like Samsung Biologics, SK Bioscience is performing well.

On Dec. 18, SK IE Technology, a battery materials company, applied for a preliminary review of its listing. The company is involved in the production of separation membranes for lithium-ion batteries, as well as film materials used in organic light-emitting diode panels. It is boosting production because of increased shipments of electric vehicles and OLED panels. The company was spun off from SK Innovation, a petroleum and car battery producer, in April 2019. SK is splitting off its growth businesses and listing them on the market. 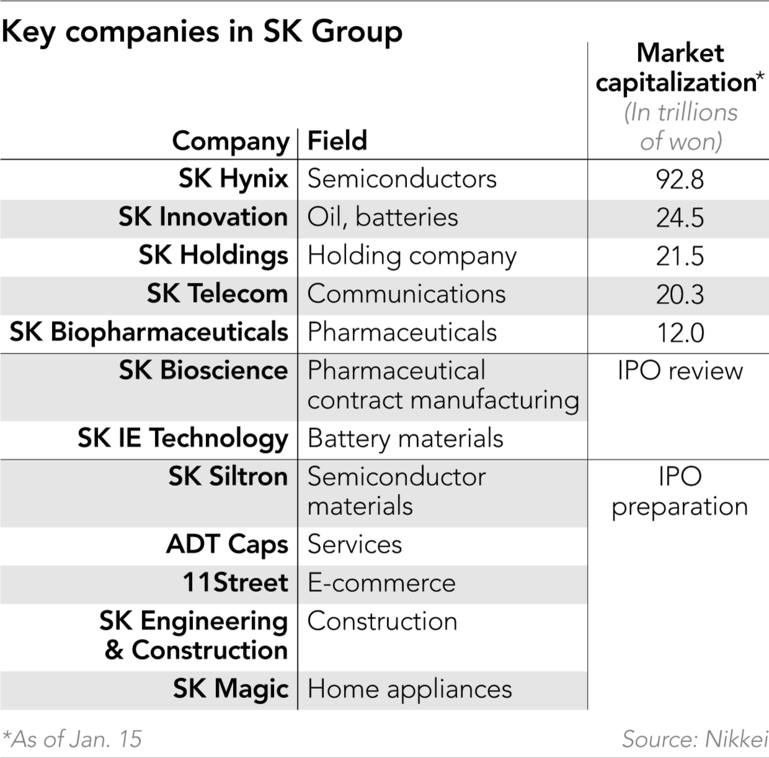 Along with these two companies, ADT Caps, a security services provider, and 11Street, a midsize online retailer that announced a partnership with Amazon in November, are said to be preparing to go public in 2021. SK Siltron, a company that produces silicon wafers, is also frequently mentioned.

Behind the successive listings of SK's subsidiaries is the company's major success in July 2020. SK listed its wholly owned drugmaker, SK Biopharmaceuticals, and sold 25% of its holdings, earning 307 billion won ($278 million). There were so many individual buyers that the company's stock reached its maximum possible daily gain for two days straight after listing. Its price rose to 5.5 times the public offering price.

Although the stock price is currently stabilizing at about 3 times the public offering price, the company's market capitalization is about 12 trillion won. The market value of SK's 75% stake in the business is about 9 trillion won. SK seems to have gained trillions of won in valuation profits on its shares. Now the company wants to replicate that success by listing its other subsidiaries. 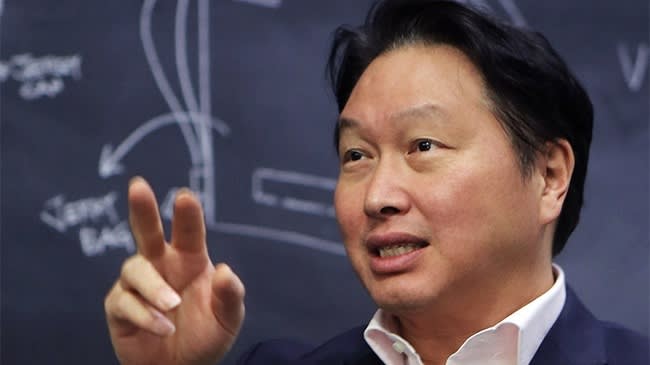 Both SK Biopharmaceuticals and SK Bioscience were spun off from the group's chemical division, and they have grown as a result. Chey, the company chairman, led the development of these new businesses. The two companies' listings also prove that SK has the know-how to start new businesses and build them from the ground up.

SK Group was established as a textile business in 1953 in the aftermath of the Korean War. With the acquisition of Korea Oil Corp. (YuKong) (now SK Innovation) in 1980, Korea Mobile Communication (SK Telecom) in 1994 and Hynix Semiconductor (SK Hynix) in 2012, the company became a major chaebol with energy, telecommunications and semiconductors as its three main operations. 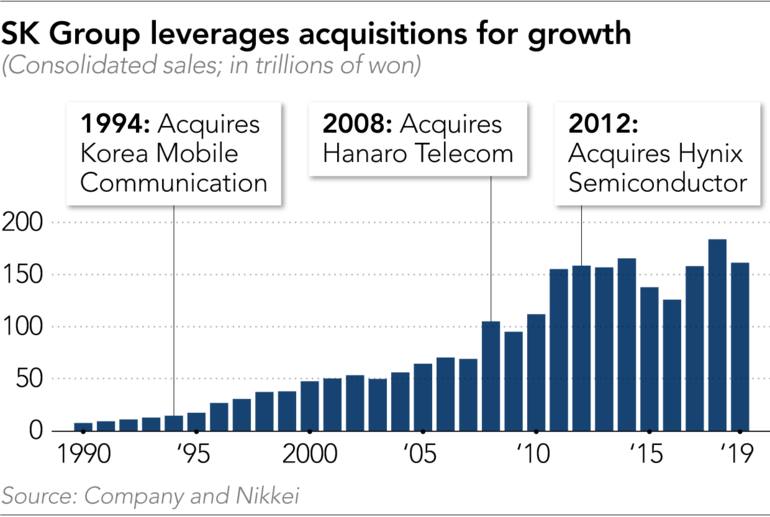 Chey decided to buy the semiconductor business, the company's breadwinner, saying, "We need to change our strategy and become a company with advanced technology to overcome the barriers to growth." In 2012, the memory market was in terrible condition, and the price tag for Hynix Semiconductor was only 3.4 trillion won. It earned cumulative net profits of 42 trillion won in the seven years through 2019.

SK Hynix used its accumulated cash to invest in Kioxia Holdings (formerly Toshiba Memory), and in October 2020 it announced it would buy Intel's memory business. SK, which entered the market only in 2012, has emerged as a major player in the realignment of the memory industry.

SK Group is working in a growing number of fields through M&A deals, and it is growing in scale by spinning off and listing businesses it has developed. With 225 trillion won in total assets, it is the third-largest chaebol, after Samsung (424 trillion won) and Hyundai Motor (234 trillion won). The company may soon catch up to Hyundai as it enters a virtuous cycle of rapid capital investment and fund recovery.