HONG KONG -- State-owned China Three Gorges, best known as the operator of the world's largest hydroelectric power plant, is preparing to list a wind and solar power subsidiary in Shanghai in what would be the country's biggest domestic IPO in more than a year.

China Three Gorges Renewables (Group) said Friday that it set a preliminary price for its initial public offering at 2.65 yuan per share. With the maximum issuance put at 8.57 billion shares, the Beijing-based power company is expected to pocket 22.5 billion yuan ($3.48 billion) after offering costs. The fresh capital will go toward building offshore wind farms.

This would produce the largest domestic IPO by an unlisted Chinese company since Beijing-Shanghai High-Speed Railway raised $4.4 billion in January 2020. China Telecom, which has its primarily listing in Hong Kong, has applied to sell shares in Shanghai in what is expected to be an even larger offering.

On completion of its share sale, CTG Renewables would debut on the Shanghai Stock Exchange in early June.

According to the offering prospectus, the proceeds will finance seven offshore wind power projects along China's coast, from the Bohai and Yellow seas in the north to the South China Sea in the south. One project, planned for the Shandong Province coast, would be the country's first offshore wind plant combined with aquafarming. 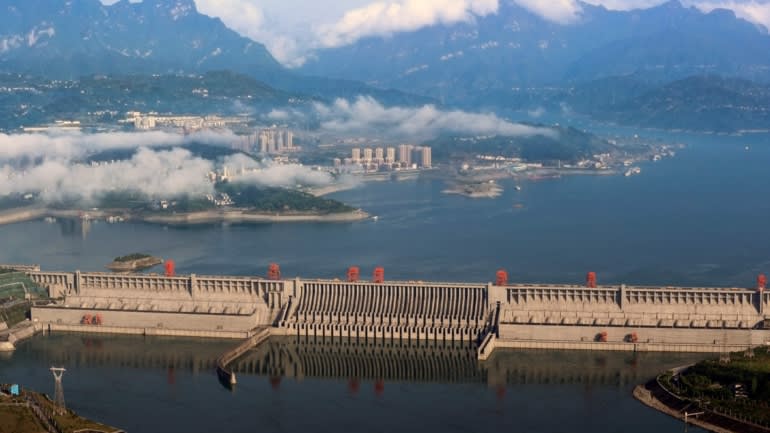 China's Three Gorges Dam on the Yangtze River in Yichang, Hubei Province, is pictured in 2017.   © Reuters

The company, as of Sept. 30, owned 11,890 megawatts of domestic power generating capacity spread over 30 of China's 34 provincial-level areas.

Of its total capacity, 58% was wind, 40% solar and the rest hydropower. This gave CTG Renewables a roughly 3% share of domestic wind power production and more than 2% of solar capacity.

CTG Renewables traces its origin to a fully state-owned water conservancy company established in 1985. It was spun off as a renewable energy business under centrally controlled China Three Gorges Corp. in 2015. Another unit, Shanghai-listed China Yangtze Power, runs the actual Three Gorges Dam.

With the IPO, the parent company's direct ownership will decrease to 49% from 70%, but it will retain majority control due to a small stake held via another subsidiary. State ownership will remain over 60%.

CTG Renewables does not hold any of its parent's overseas wind power investments, which include generating assets in Pakistan, Germany, Portugal and Brazil.

China's state-owned oil companies have rushed to embrace new energy sources as well in the wake of Xi's pledge.

PetroChina, the largest by assets, said in late April that it would establish a $1.55 billion new-energy investment fund with parent China National Petroleum Corp. as both put more emphasis on natural gas, wind, solar and geothermal power.

Dai Houliang, who doubles as chairman of both PetroChina and CNPC, said the group expects to reach peak carbon emissions in 2025, five years ahead of the national target stated by Xi last year, and would achieve "near-zero carbon emissions by 2050," a decade ahead of Xi's target.

China Petroleum & Chemical, better known as Sinopec, is betting on hydrogen as a new source of energy, along with natural gas. It aims to set up 1,000 hydrogen-equipped fueling stations in the country by 2025, with 10 already open as of April.

CNOOC, the smallest of China's three oil majors by revenue and assets, is looking into wind power, as it owns far more maritime oil and gas assets than its two peers.