In first Chinese IPO of Biden era, RLX rockets to 146% gain in US Chinese companies seeking billions of dollars from initial public offerings in New York and Hong Kong have been raising their fundraising targets amid anxiety over the direction of Biden's China policy.

RLX priced its IPO, the biggest so far this year on the New York Stock Exchange, at $12 a share, lifting the size of its stock sale to $1.4 billion.

China's largest producer of vaping devices had been marketing its stock within a range of $8 to $10 a share, which at the top end would have yielded proceeds of $1.2 billion.

In Hong Kong, Tencent Holdings-backed short video platform Kuaishou Technology is set to begin taking orders for up to $6 billion in shares as early as Monday in what is shaping up as the city's largest IPO since August 2018.

Kuaishou, which competes against TikTok's Chinese sister app Douyin, had been expected to seek as much $5 billion but raised its upper limit, along with its projected valuation, after discussions with potential investors this week, two people familiar with its plans said. 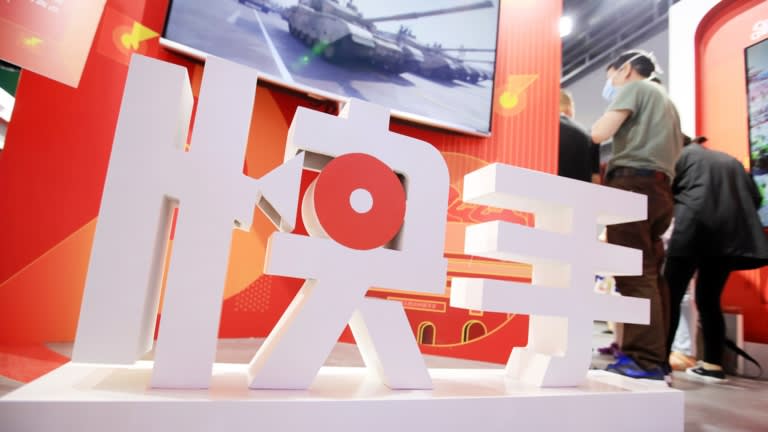 Kuaishou will price its offering late next week and is expected to make its market debut in early February.   © AP

Smoore, a rival, listed last year on the Hong Kong Stock Exchange. But until now most Chinese video app operators, including iQiyi, Bilibili, JOYY and Youku Tudou, have chosen to list in New York.

"The booming stock market and the ample liquidity in it are making Chinese companies keen on getting listed," said Tianlei Huang, research fellow at the Peterson Institute for International Economics in Washington. "There is an expectation among Chinese firms that under the new US administration, U.S.-China tensions would ease and there may even be a possibility that President Joe Biden would revoke the many disruptive executive orders signed by (Donald) Trump."

An executive order issued by Trump that came into effect last week bars investment in the securities of companies judged to be linked to the Chinese military.

As a result, the NYSE suspended trading in the shares of state-run telecommunications companies China Mobile, China Telecom and China Unicom. A wider range of Chinese companies blacklisted by Washington in recent weeks have been dropped from stock indexes managed by MSCI, FTSE Russell and others.

Further, under a law passed by Congress last year, all Chinese companies could be kicked off American exchanges next Jan. 1 unless a deal is worked out with Beijing to allow access to their audit records. Citing national security, Beijing forbids such reviews.

Facing these problems, a number of large Chinese companies listed in New York, including Alibaba Group Holding and NetEase, have established backup positions on the Hong Kong exchange over the past 14 months through new stock offerings. Other companies that might previously have been expected to favor the U.S. for their debut have instead turned to Hong Kong, Shanghai or Shenzhen.

Last year, Chinese companies raised $87.9 billion worldwide, equal to 42% of total global IPO proceeds, according to data compiled by Refinitiv. That included 35 offerings on the Nasdaq Stock Market and NYSE that raised $13.5 billion, the U.S. biggest haul for Chinese companies since 2014.

Kuaishou will price its offering late next week and is expected to make its market debut in early February. The company's top-end IPO valuation of $60 billion would double the level at which it was valued a year ago when it privately raised about $5 billion, the people familiar with its transactions said.

"Investor interest and feedback was positive, overwhelming," said a person involved in the share sale. "If the interest turns into bids for the IPO, books will be multiple times covered in no time."

Kuaishou reported an adjusted loss of 7.2 billion yuan ($1.11 billion) for the first nine months of 2020 compared with an adjusted profit of 1.8 billion yuan a year earlier after its selling and marketing expenses surged as part of an effort to build its brand. Revenue climbed 49% to 40.6 billion yuan over the same period, according to its prospectus.

ByteDance, the owner of Douyin and TikTok, is expected to dual list later this year in Hong Kong and Shanghai. Bilibili has filed a confidential application for a Hong Kong secondary listing worth as much as $3 billion.

RLX, backed by the China arm of U.S. technology fund Sequoia Capital, generated revenue of 2.2 billion yuan over the first nine months of 2020, up 93% from a year before. Net profits reached 109 million yuan, according to its prospectus.