SINGAPORE -- Asia's traditional trade and commodity stocks made strong gains in the first half of this year as big global economies began to recover from the COVID-19 pandemic, with a Chinese container shipping company leading the way.

Asian stocks overall, however, underperformed. MSCI's Asia Pacific price index rose 5% while the world index gained 12% in the nearly six months through last Friday. The discrepancy is due to hopscotching COVID resurgences, tighter tech regulations, higher U.S. Treasury yields and other factors that analysts say could also loom in the second half of the year.

According to data from QUICK-FactSet as of Friday, approximately 60% of about 600 Asian companies with market caps over $10 billion at the end of 2020 gained during the first six months of 2021, with the remaining 40% losing value.

Global trade volume hit a record high in April on Chinese exports and imports, according to the World Trade Monitor database, compiled by the Netherlands Bureau for Economic Policy Analysis. The benchmark Global Container Freight Index has been soaring in recent months, reflecting demand for shipping. These companies also improved their domestic market share, especially in the long-steel space. The dominance of flat steel in their portfolio allowed them to benefit more from the rally in steel prices, the report says. Domestic flat-steel prices nearly doubled to 72,000 rupees ($970) per ton in June from 38,000 rupees a year ago.

"The price rally," the CRISIL report says, "spurred by China's green policy, is likely to benefit through the first half of this fiscal [up to September], too, with flat steel prices already up 70% since April. While prices will soften in the second half, they would still be 40% to 45% higher year-on-year."

Oil and gas companies, which suffered severely in the early days of the pandemic, also recovered in the first half of this year. State-owned PetroChina's market value improved 34% over the six months, while that of Thailand's PTT Exploration and Production gained 23%.

Among consumer-facing companies, some automakers and their bullish sales attracted investors. Toyota Motor's market value grew 24% over the nearly six months, with its share price on June 15 reaching above 10,000 yen for the first time since its listing in 1949. Besides benefiting from renewed demand, Toyota has been one of the rare car companies to have mostly dodged the impact of the global chip crunch, thanks to its stockpiling of inventory.

Investors may have also bought stocks due to Toyota's decarbonization commitment. The company in June vowed net-zero carbon emissions at all of its plants around the world by 2035. The pledge brings forward Toyota's original target by 15 years.

Honda Motor, whose market value jumped 25%, is another automaker whose stock price is on the march thanks to green goals. The company in late April announced it would sell only electric and fuel-cell vehicles by 2040, becoming the first Japanese automaker to announce the phaseout of gasoline-powered cars.

Last year, when high market liquidity changed the game, fast-growing digital tech companies were Asia's stock darlings. Some of these issues continued to grow in the first half of 2021. The market cap of Kakao, the South Korean internet services group, leapt 99% and was Asia's third-biggest gainer. That of Sea, the Singaporean online gaming and e-commerce group, vaulted 46%. 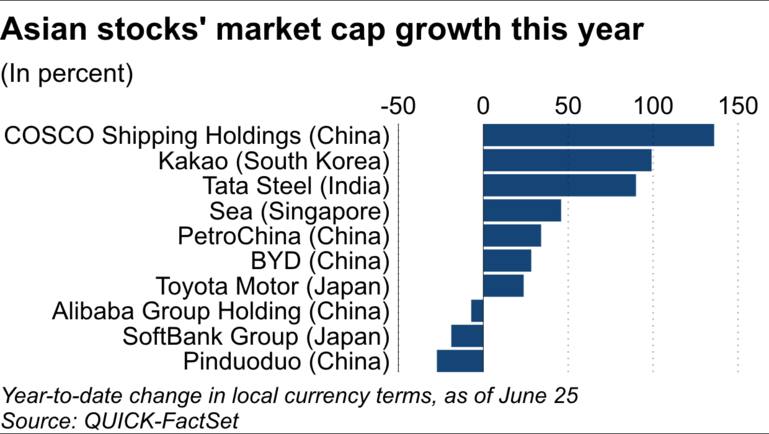 Asia's other biggest stocks ended the first half with modest gains. At Samsung Electronics, it was 1%. Chinese beverage maker Kweichow Moutai was up 5%, and Taiwan Semiconductor Manufacturing Co. rose 12% on steady chip demand. These three companies as well as Tencent and Alibaba were among the world's top 20 most valuable stocks as of Friday.

Looking ahead, multiple downside risks will linger and haunt Asia's stock markets. DBS Group Holding's strategists wrote in an outlook report issued on Friday that the COVID resurgence and other headwinds will persist in the coming quarter.

"Emerging markets, such as emerging ASEAN, are likely to be more affected than the rest of the region as their financial markets are dependent on foreign flows," they wrote. "Risk-reward should favor developed markets which are ready to open their economies while emerging markets are still struggling with new COVID waves."

With respect to Chinese tech stocks, Margaret Yang, a strategist at DailyFX in Singapore, noted that the "Chinese tech sector experienced a period of consolidation in the first half after authorities kicked off an antitrust campaign."

"Prices appeared to have stabilized recently, however, as negative news may have been fully digested," she told Nikkei Asia. "A 'catch-up' rally may be seen in the second half if economic growth regains momentum and concerns about [an] antimonopoly crackdown ease."