TOKYO -- The Tokyo Stock Exchange reopened trading on Friday, bringing some relief to market participants who were unable to execute trades on Thursday due to a system outage that halted all activity.

Trading began at 9 a.m. as normal and without limits, based on Wednesday's close as starting prices. The TSE replaced its equipment that caused the system failure and confirmed that the trading system worked without problems.

The benchmark Nikkei Stock Average rose 180 points, or 0.7%, at one point in early morning trade, but soon struggled to find direction and traded nearly flat.

The index closed 0.7% lower after being weighed down by a plunge in U.S. stock futures in the afternoon following news that U.S. President Donald Trump tested positive for the coronavirus. Futures tied to the Dow Jones Industrial Average plummeted 500 points at one point.

Trading value for the first section, one of the main boards of the TSE, totaled 2.8 trillion yen ($26 billion), slightly lower than Wednesday.

While a sense of relief spread in the market once trading activity resumed following Thursday's troubles, "many investors are still uneasy and are choosing to wait and see instead of actively trade," said Masahiro Ichikawa, senior strategist at Sumitomo Mitsui DS Asset Management. "Detailed reasons for the outage remain unclear. Fujitsu and the TSE will have to continue investigating and be transparent to the public to restore the market's trust," he added. 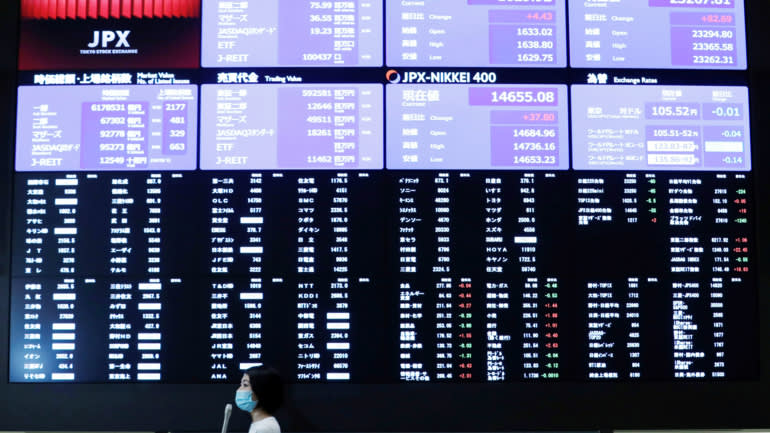 The Tokyo Stock Exchange reopened trades on Oct. 2 after having experienced a system malfunction the day before.   © Reuters

Chief Cabinet Secretary Katsunobu Kato told reporters on Friday that the Financial Services Agency will "promptly issue an order based on laws and regulations to investigate the cause and take thorough measures to prevent any recurrence."

Based on the country's Financial Instruments and Exchange Act, the FSA on Friday issued the Japan Exchange Group and TSE to report on the system failure, requesting a detailed inspection into the cause as well as the system's management structure. In light of the historic crash damaging the trust of investors, the FSA plans to make sure preventive measures are implemented while also eyeing possible administrative disposition.

Trading resumed for about 3,700 listed stocks as well as exchange-traded funds and real estate investment trusts.

Shares in Fujitsu climbed around 1% at one point, but quickly lost momentum, closing 3% lower. The information technology services company developed the TSE's "arrowhead" trading system. The company has apologized for the failure.

The trading halt likely wiped out 3 trillion yen ($28 billion) in buying and selling opportunities, but the TSE said it is not considering asking Fujitsu for compensation.

The bourse's shutdown on Thursday was caused by "a hardware failure" in a part of the arrowhead trading system. Switching to a backup device also failed, making it impossible for market information to be distributed.

TSE President and CEO Koichi Miyahara apologized for the outage at a news conference on Thursday, saying "I am sorry to have caused such an event in a time where the government is working on the concept of [turning Japan into] a global financial hub."