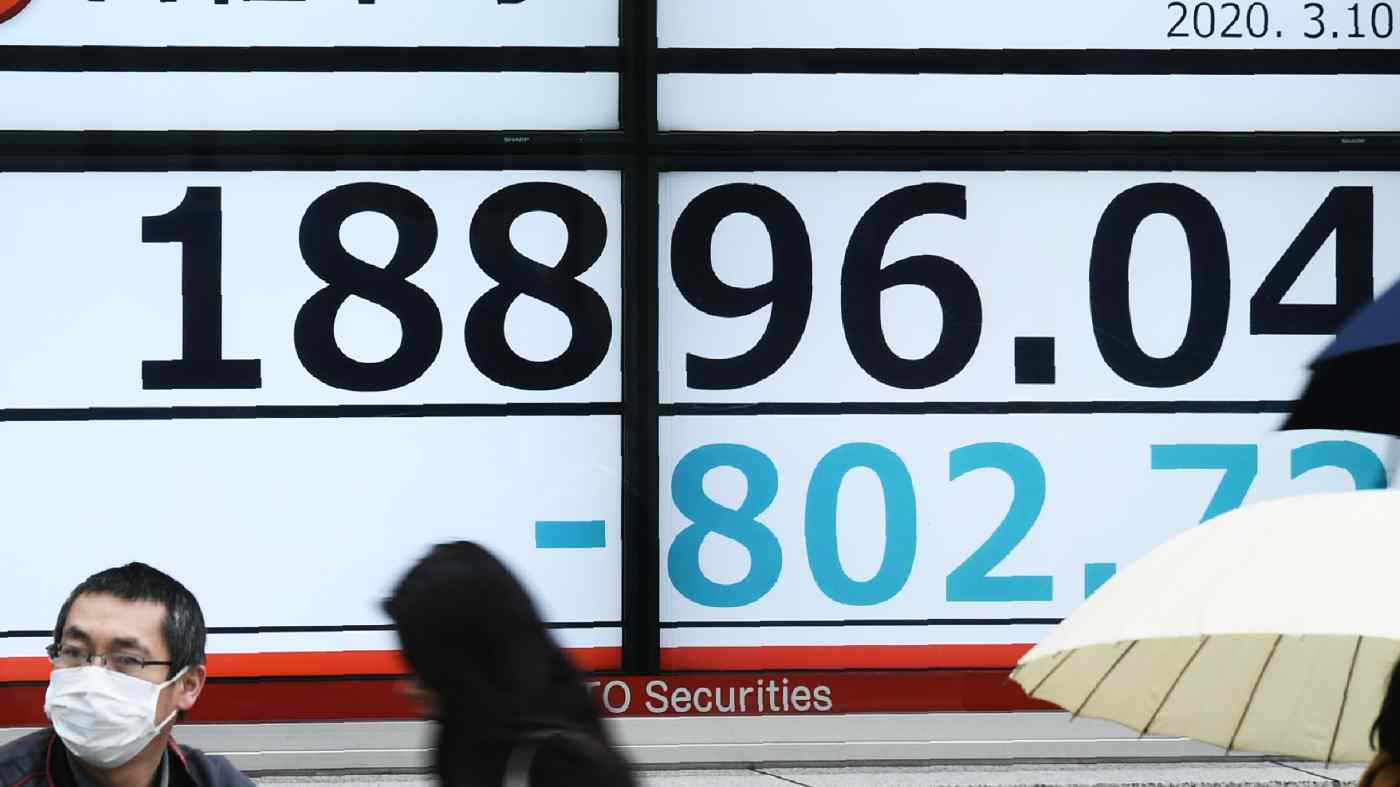 The Nikkei average fell more than 800 points to 18,891 at one point, its lowest in intraday trading since April 2017. Major stocks all opened lower, including SoftBank Group, Toyota Motor and Mizuho Financial Group.

Plummeting oil prices and escalating coronavirus fears have rattled global financial markets this week, with investors rushing to haven assets. As a result, the yen reached its highest level since November 2016 on Monday, breaking the 104 mark to as high as 101.55 per dollar.

Tokyo's turbulent opening on Tuesday came after global stocks plummeted on Monday. The Dow Jones Industrial Average closed 2,013 points lower at 23,851, amounting to a 7.8% fall that was the biggest percentage drop since October 2008, just after the Lehman Brothers crisis. The rapid sell-off triggered a market "circuit breaker" minutes after the opening, halting trading for 15 minutes after a 7% decline in the S & P 500.

U.S. bond yields also plunged to their lowest levels ever.

Fears of the new coronavirus and its effects on the global economy have led to sell-offs in markets worldwide, threatening global supply chains and sparking panic buying among consumers. Crashing oil prices have added to investor fears.

Oil prices collapsed after talks broke down between OPEC and Russia on Friday on whether to cut output in response to a coronavirus-induced drop in demand. The Saudis wanted a collective response from OPEC for deeper cuts to oil production to support crude prices in the face of the virus crisis, but Russia was opposed, thinking that higher oil prices would aide U.S. shale producers, whose rise has been a threat to existing oil producers.

U.S. benchmark West Texas Intermediate crude dipped into the $27-per-barrel range at one point on Monday.

"The global financial market is in panic mode with institutional investors taking an extreme risk-off approach," said Tomo Kinoshita, global market strategist at Invesco Asset Management, in a report on Tuesday. "This will likely lead to high volatility in the market for a while."

Kinoshita noted that markets were looking to central banks, including the U.S. Federal Reserve Board, to help control any economic downturn. "Many of them will focus on liquidity policies to stop financial market upsets from spilling over into corporate credit issues."

Yoshinori Shigemi, global market strategist at JPMorgan Asset Management in Tokyo, said, "There are still calm investors who want to buy low, which has supported indexes from declining any lower."

Some Asian markets began to reverse losses during the day as U.S. West Texas Intermediate crude gained about $2, or 6%, to $33 in off-hours trading. Some investors began buying in hopes that an aid package promised by Trump would relieve U.S. oil producers.

Yasuhiko Hirakawa, investment manager at Rakuten Investment Management, said, "It's likely that long-term investors like pension funds aren't selling any assets in a panic." He added that sell-offs had mostly been driven by commodity trading advisers and hedge funds.