TOKYO -- An investment strategy that considers environmental, social and governance factors is taking off among small and mid-size Japanese investors.

The domestic issuance of green bonds, social bonds and sustainability bonds in fiscal 2018 increased 3.5 times from the previous year to an all-time high of 653.9 billion yen ($6.01 billion).

In April and May, the first two months of fiscal 2019, the issuance of ESG bonds amounted to 163 billion yen. As these issuances tend to concentrate at the end of the fiscal first half and full year, the total is expected to set another high for the year that began in April.

Shinkin credit associations, credit cooperatives and educational corporations are increasing the amounts they invest in ESG bonds. Of the 21 institutions that declared they would buy ESG bonds offered by Daio Paper in October 2018, 16 were shinkin lenders and credit cooperatives. Subscriptions for a seven-year, 15 billion-yen bond came to around 30 billion yen.

This contrasts with the interest in a 10 billion-yen, seven-year ordinary bond issued by the paper maker in December 2017, when subscriptions amounted to some 13 billion yen. As yields on the two seven-year bonds are about 0.6%, the difference in subscriptions reflects increased demand for ESG bonds.

In fiscal 2018, some 20 educational corporations declared purchases of ESG bonds.

One ESG attraction is that the niche allows smaller investors to demonstrate their willingness to contribute to society. 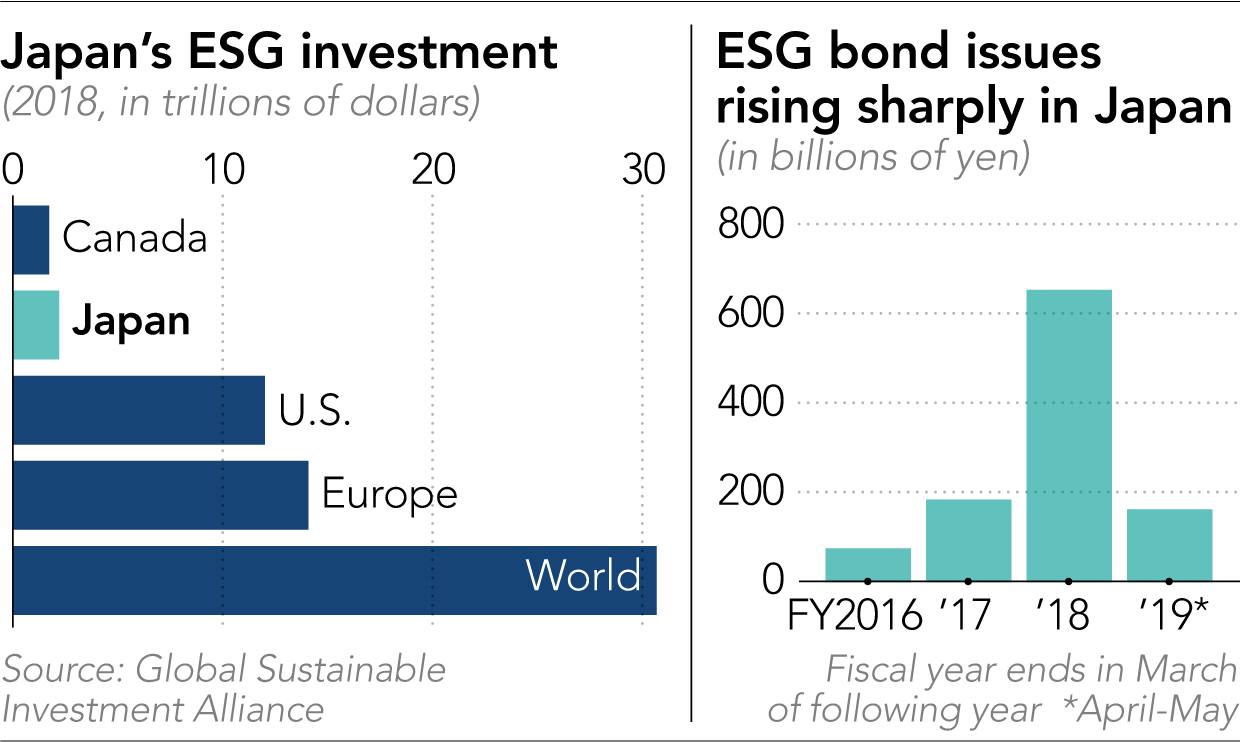 Yields on domestic ESG bonds are trending down as prices rise due to increased demand. Large institutional money managers are therefore becoming wary of investing in these instruments. Japan's top four life insurers invested a combined 20.2 billion yen in domestic ESG bonds in fiscal 2018, up 16% from the previous year but a fraction of the 250% gain that the domestic ESG bond issuance chalked up. The insurers also bought more ESG stocks and foreign bonds.

There are now services that use funds raised by selling ESG bonds to encourage smaller companies to treat the environment more responsibly.

Fuyo General Lease this summer will spend 10 billion yen to support smaller companies planning to use renewable energy sources for all of their electricity needs. The leasing company will raise half of the sum by issuing a green bond. It will then offer the recipient companies preferential leases on solar panels and other renewable energy equipment.

According to the Global Sustainable Investment Alliance, which compiles investment data on stocks, bonds and other ESG-related financial instruments, total global investment in this niche came to $30 trillion in 2018. ESG investment in Japan remains much smaller than in the U.S. and Europe, amounting to $2 trillion for the year. Stocks accounted for roughly half of the Japan total, and bonds for almost 40%.

Mitsubishi UFJ Financial Group in May said it will make 20 trillion yen worth of ESG investments from fiscal 2019 to 2030. The Government Pension Investment Fund has declared the start of investment in ESG bonds and invested 55 billion yen in the World Bank Group.

Japan's institutional investors mostly focus their ESG investments overseas due to a scarcity of ESG stocks and bonds at home.