TOKYO -- A panel report from Japan's financial regulator estimates that an average elderly couple will need an extra 20 million yen ($186,768) to fund a 30-year retirement. That has prompted retail investors, many still in their 20s, to start building up assets on their own.

Nikkei surveyed major online brokerages about the changes they have seen since the report was released on June 3.

In the third week of June, Monex received 70% more applications for iDeCo than the daily average in April.

From June 3 to 7, industry giant SBI Securities saw applications for general securities accounts jump 15% from the previous week and those for NISAs were up 30% from a week earlier.

"Most applicants are in their 20s to 40s," said a representative of a major online brokerage. 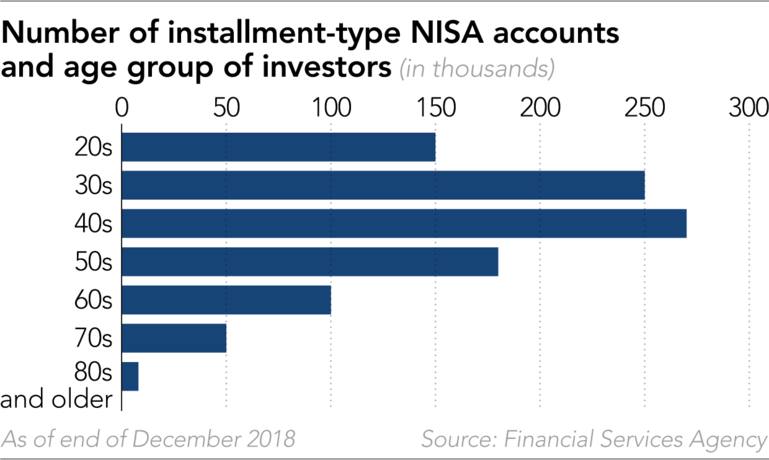 Financial consultations are also on the rise. On June 17, Financial Academy, a Tokyo-based financial seminar organizer, held an emergency class on the 20-million-yen retirement shortfall. The event had a seating capacity of 36, but 144 people in their 20s to 50s showed up after work. Another financial planning office in Tokyo received about 40% more applications for seminars and consultations than usual.

The Financial Services Agency report was intended to urge people to build up wealth to prepare for a longer post-retirement life. The FSA’s estimate that unemployed couples will need an extra 20 million yen if they rely solely on pensions sparked criticism from opposition lawmakers, who said the government was admitting to flaws in the pension system.

Finance Minister Taro Aso said on June 11 that he would not accept the report, saying it was causing anxiety and misunderstanding among the public.

But people are now looking to invest on their own, as younger workers believe public pensions will not be sufficient for their eventual retirement. Retail investors have flocked to financial seminars like this one, held in Tokyo.

It is a prime opportunity for financial institutions to win over customers, but major banks and brokerages have not seen a substantial increase in visitors. Some regional banks in greater Tokyo received more applications for NISAs than in April or May, but many said inquiries have not increased despite the report.

Young people are more likely to turn to online brokerages, making it harder for brick-and-mortar banks and brokerages to attract customers. "Younger investors tend to favor online brokerages as the procedures for opening accounts are easier than meeting in person," said Masakatsu Saito, president and CEO of kabu.com Securities.

Following the FSA report, Monex conducted an emergency online survey from June 21 to 24 targeting retail investors who have accounts at the company. About 9,600 people in their 20s through 50s responded.

Of them, 86% said 20 million yen will not be enough, and 41% of respondents said they will need more than 50 million yen.

And 21% said the report had added to anxiety about their post-retirement lives. Among 5,198 respondents who had already started investing a certain amount every month, the largest group of respondents said they invest 10,000 yen to 49,999 yen a month.