Investors scramble as outbreak spreads in Japan, South Korea and outside Asia 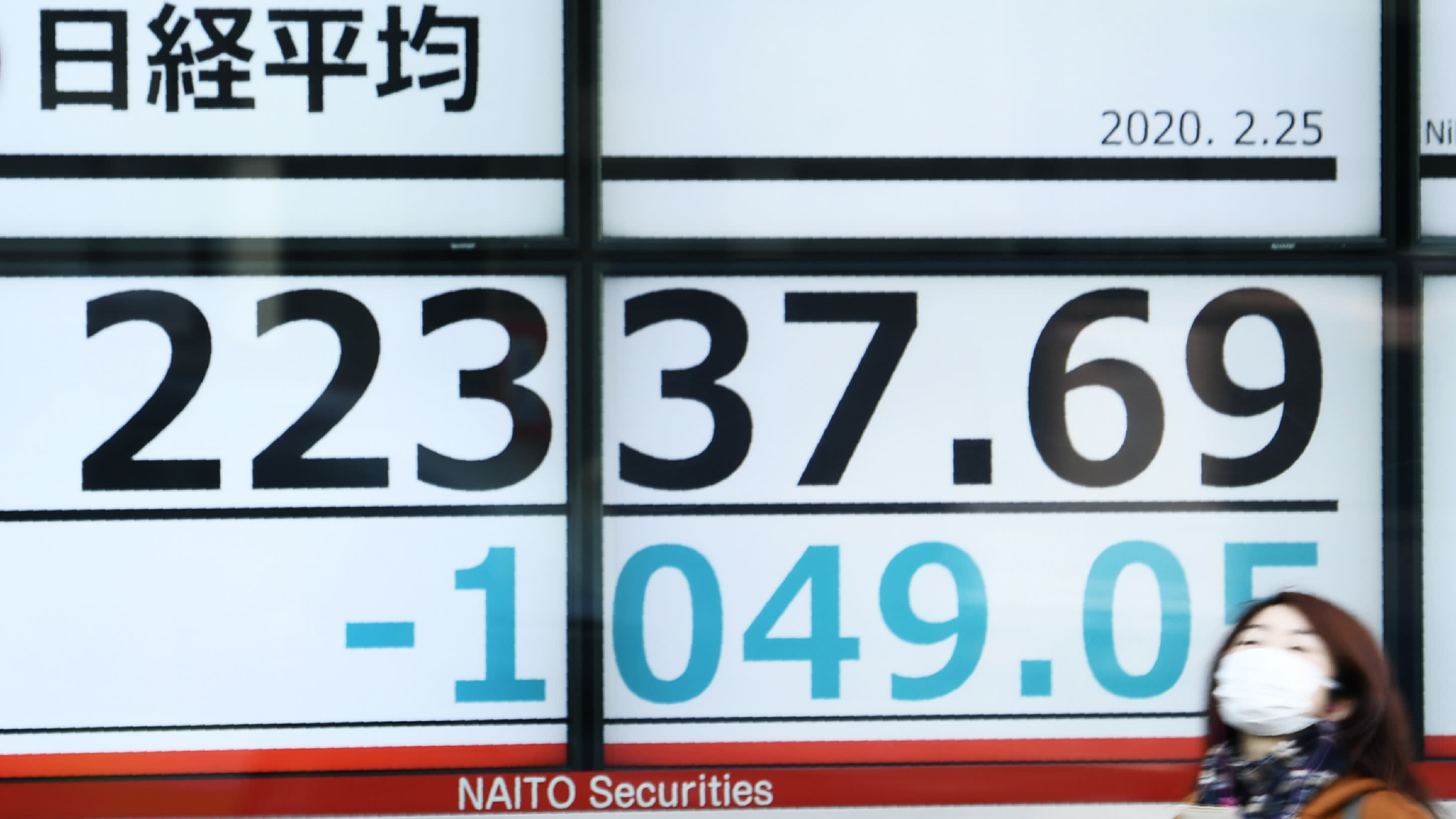 A signboard in Tokyo shows how the main gauge on the Tokyo Stock Excahnge is reacting to the latest news of the coronavirus outbreak.

TOKYO -- The Tokyo stock market declined sharply as it reopened Tuesday after a three-day weekend, following U.S. and European sell-offs on worsening American business sentiment and the spread of coronavirus infections outside China.

Market players are watching whether the benchmark index stabilizes around the 200-day moving average of 22,193.

Stock markets elsewhere in Asia have been slow to recover from Monday's sharp declines. The Shanghai Composite Index dropped 2.8% at one point on Tuesday but recovered to a decrease of less than 1% in the afternoon. Hong Kong's Hang Seng Index lost 0.3% at one point, and Taiwan's TAIEX was down by 1% at one point.

South Korea's KOSPI was up slightly following an almost 4% plunge on Monday.

Looking ahead, prices will "depend on how much the novel coronavirus spreads globally outside of Asia [and affects the global economy]," said Yasuhiko Kuramochi, general manager of the investment information department at Mizuho Securities. He added that there are currently few factors that would boost stock prices.

The Nikkei Stock Average had been enjoying a monthslong rising trend before the outbreak gave investors a reason to lock in profits.

In New York, the Dow Jones Industrial Average plunged more than 1,000 points on Monday to fall 1,259 points over two trading days. Investors became increasingly concerned about the risk of the virus hurting the global economy after more infections were found not only in South Korea and Japan, but also outside Asia, such as in Italy and Iran.

Uncertainty is also growing over the American economy. The U.S. Purchasing Managers' Index reached a 76-month low of 49.6 for February, under the boom-or-bust line of 50, in preliminary figures released Friday by IHS Markit.

Group of 20 finance ministers and central bank governors vowed in a communique Sunday to "enhance global risk monitoring, including of the recent outbreak" of the coronavirus. "We stand ready to take further action to address these risks," they said after a two-day meeting in Riyadh, Saudi Arabia.

This did not stem the fear that tore through financial markets Monday.

"With the Dow dipping under 28,000 so easily, one can tell that traditional psychological barriers based on technical analysis are not working," said Hiroki Ihara, senior market analyst at the Tokai Tokyo Research Institute.

Investors are spooked by the virus spreading from the Far East to Europe and the U.S., and "for the short term, we must prepare ourselves for the Nikkei Stock Average dropping below 22,000," Ihara said.