TOKYO -- The correlation between the Japanese and U.S. stock markets has shifted since the start of the year, with the Nikkei Stock Average outperforming the Dow Jones Industrial Average by some 2,000 points. 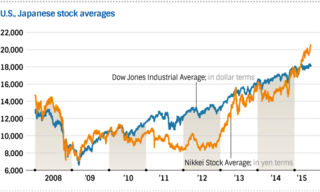 U.S. stocks have for many years been trending higher on strong corporate earnings, but there is concern that a muscular dollar will put downward pressure on corporate earnings this year. U.S. stocks often fluctuate on speculation about whether and when the U.S. Federal Reserve will lift its zero interest rate policy. And though the Dow is moving at record highs, it has entered a mature phase.

Japanese stocks, meanwhile, are rising on expectations of better earnings. And with Japanese companies on track to post strong results again this fiscal year, these expectations are likely to become a reality. If the yen continues to weaken modestly, export profitability will get a further boost, adding to the tailwind provided by lower crude oil prices and interest rates.

"Whale in a pond"

The increasingly contrasting mood in the Japanese and U.S. stock markets may prompt global investors to start thinking about shifting their money from U.S. stocks to reap bigger gains. The problem is, if they start pumping funds into smaller markets, they risk becoming "a whale in a pond." Japan's stock market is not one of those "ponds," however, given that the total market capitalization of the Tokyo Stock Exchange's first section has just recovered to 600 trillion yen ($4.79 trillion). According to the MSCI World Index, which tracks international stock trends, Japan accounts for 8.73% of total global market capitalization, far smaller than the U.S.'s 56.79% but higher than the U.K.'s 7.98%.

Foreign institutional investors who are trying to gain an edge over other fund managers cannot afford to ignore Japanese stocks. Their buying is likely to continue supporting Japanese shares.

One concern is a sudden slide in U.S. stocks. If that happens, international investors could try to sell off their lucrative Japanese stocks to procure cash.

Many market watchers are no doubt hoping that U.S. jobs data for May, due out later this week, will prove mediocre so as not to cause the Fed to front-load its rate hike or fuel jitters about a U.S. economic slowdown.