TOKYO -- Foreign investors, especially from Europe, are buying more Japanese government bonds as falling interest rates around the world make them more attractive than those of other countries. 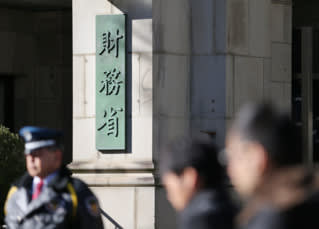 According to "International Transactions in Securities," published by Japan's Ministry of Finance on Wednesday, international net investment in JGBs was worth 14.4 trillion yen ($118 billion) in fiscal 2014. The largest since fiscal 2010, when foreign net buying stood at a record 15.4 trillion yen and 17 times more than the 844.7 billion yen they bought in fiscal 2013.

Government bond yields have continued to decline in major European countries throughout fiscal 2014. In Germany and the Netherlands, among other countries, yields on shorter-term government bonds have remained negative.

That has prompted European investors to shift their money into JGBs. From April last year through February this year, net buying of JGBs by Europeans jumped about 40% to a record high, compared with fiscal 2013. Amid growing geopolitical risks such as increasing tensions between the U.S. and Russia over Ukraine as well as the rise of Islamic militants, JGBs are attracting increased global demand as risk-free assets.

Foreign investors are starting to play a larger role in formation of interest rates in Japan as they increase their JGB holdings. According to the Japan's central bank flow of funds data, overseas investors held 9.3% of JGBs as of the end of December last year, a record high since the end of December 1997, when comparable data first became available.

The increase in foreign holdings of the bonds could help facilitate smooth market digestion of JGBs. Yet at the same time, many market watchers are concerned that the growing number of overseas investors could make JGB prices more volatile. A senior bond strategist at Okasan Securities, expressed concern that "the increase in foreign holdings may increase the risk of big fluctuations in interest rates."

In addition to the fact that Japan's interest rates could become more sensitive to economic and financial developments overseas, "the risk of a rapid increase in interest rates increases" when concerns over Japan's financial problems should grow, said Suzuki.

Since the Bank of Japan launched its quantitative and qualitative monetary easing program in April 2013, government bond market players have been preoccupied with the bank's actions. As foreign investors are increasing their presence in the Japanese bond market, market players need to be more concerned about how overseas investors see Japan's financial problems.