HONG KONG -- Investors are pouring money back into emerging markets in Asia and elsewhere as hopes rise that the U.S. will hold off raising interest rates and come to a trade agreement with China. But many investors remain nervous as a successful outcome to the U.S.-China negotiations is far from certain.

Since the start of the year, a net $16 billion has flowed into emerging economies through U.S. exchange-traded funds, according to data from QUICK-FactSet. This is apparent in U.S. ETFs specializing in China. Foreign investors in January bought a net 60.7 billion yuan ($8.95 billion) of stocks listed in Shanghai and Shenzhen via Hong Kong, a monthly record and a 73% increase from a year earlier.

Large net purchases have continued in February, and in the first month and a half of the year the net inflow into Chinese stocks reached 99 billion yuan ($14.6 billion), far outpacing the monthly average of 24.5 billion yuan in 2018.

In May to July of last year, a net $11.4 billion drained from emerging markets, partly driven by higher U.S. interest rates and currency crises in Argentina and Turkey. 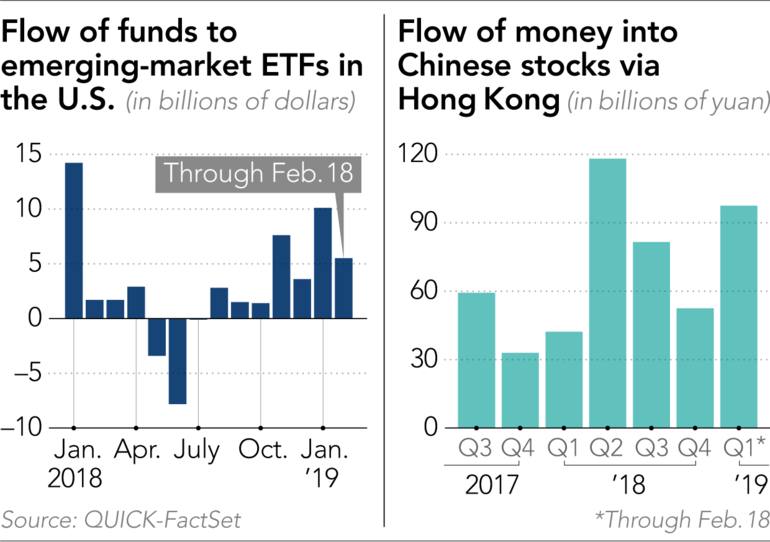 But market sentiment suddenly brightened in early January, after U.S. Federal Reserve Chairman Jerome Powell suggested the central bank would put further rate increases on hold. Investment in emerging markets hit a one-year high of $10.1 billion in January and has so far maintained that pace this month.

"Return flows to emerging economies are evident as funds come back to equity markets as well as bond markets," said Takafumi Horiuchi, an economist at Mizuho Bank.

Stock indexes in emerging economies and Asian countries are rising almost across the board. The Shanghai Composite Index has jumped 10% since the start of the year, rebounding from the previous year's 25% drop, while the MSCI Emerging Markets Index has climbed 6% over the same period.

Emerging-market currencies are also firming. The yuan, which fell to a 10-year low in 2018, is holding steady.

Interest rate rises in the U.S. tend to pull money in that direction and push the dollar higher. While emerging economies were forced to raise their own rates to defend their currencies in 2018, they have more leeway to loosen monetary policy to lift economic growth, now that the Fed has called a temporary halt to rate increases. 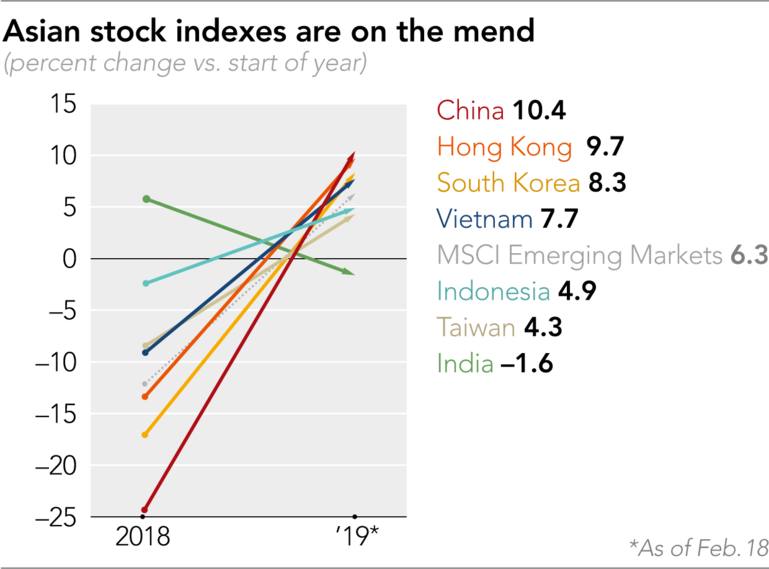 In addition to the Fed's dovish outlook, trade talks between the U.S. and China are considered unlikely to end without a deal, said a Hong Kong-based foreign exchange dealer.

Markets were significantly affected by the escalation in trade tensions last year, as the world's two largest economies imposed tit-for-tat levies on each other. Washington and Beijing set a 90-day negotiation period in December, but that has not completely dispelled the anxiety, with investor sentiment having been repeatedly shaken by conflicting reports on the progress of the talks.

Expectations for an agreement between the world's two largest economies have risen, with U.S. President Donald Trump showing signs of willingness to compromise, such as extending the deadline of the negotiations beyond the original cutoff date of March 1.

Although the Chinese economy is slowing, financial markets are hopeful that Beijing's economic stimulus measures will begin to bear fruit in the second half of this year.

While stocks in Hong Kong and Taiwan are sensitive to economic activity in China, they are bouncing back from their 2018 lows.

One cloud on the horizon is Chinese companies, which have repeatedly cut their earnings forecasts. Stock prices are being pushed higher based on hope, despite a lack of fresh buying incentives, a Hong Kong-based investor said.