YANGON -- Myanmar's securities regulator and the Yangon Stock Exchange are planning to establish an alternative market where investors can trade shares of unlisted companies, the Nikkei Asian Review has learned.

Dubbed the Myanmar Public Companies Board, the new market will be a steppingstone for companies to list on the fledgling Yangon Stock Exchange, according to a document obtained by Nikkei.

The Japanese-supported exchange opened in 2016 but still lists only five companies. On July 12, the commission announced that it would allow foreign investors to trade there by the end of the year.

The new board aims to revitalize the local capital markets and help fuel the growth of domestic companies.

The move comes as one of Southeast Asia's least-developed countries seeks to quicken the pace of opening up an economy closed under decades of military rule.

Companies that have previously conducted public offerings or those with more than 100 shareholders will be encouraged to register for the new market. About 60 such companies exist in Myanmar.

Private companies have been allowed to raise capital through public offerings once they received approval from regulatory authorities. But after the new market is launched, these companies will be required to join it to obtain approval.

The Securities and Exchange Commission of Myanmar will not examine companies that want to list there, but will require them to submit financial information and plans for future public offerings within five years. The commission plans to use the same system for the exchange for trading and settlement.

There are precedents such as London's Alternative Investment Market or Singapore's Catalyst. The difference is that Myanmar's new market aims to encourage companies to list without requiring fulfilling a standard. In Vietnam, the Hanoi Stock Exchange established a similar market called Unlisted Public Company Market in 2009. The Yangon exchange was established by state-owned Myanmar Economic Bank, the Daiwa Institute of Research and Japan Exchange Group, the parent of the Tokyo Stock Exchange. Japan's public and private sectors have supported the exchange since it was launched in 2016, but share prices have struggled to take off.

In April, the Myanmar Stock Price Index, or Myanpix, stood at one-third its launch level. Daily trading volume averaged just 46 million kyat ($30,000) over the past year.

An official of the Yangon exchange said the scarcity of listed companies and investors has caused a vicious cycle, which the securities commission hopes to remedy by letting foreigners own up to 35% of a company.

The initial plan was to limit trading to foreigners living in Myanmar, but the commission did not mention such a rule in the notification.

One of the country's most prominent business figures, Serge Pun, executive chairman of listed property developer First Myanmar Investment, said at its shareholders meeting on Aug. 3 that joining forces with foreign investors will help his company grow.

Tun Tun, a 34-year-old used car dealer, plays the stock market in the hope of building assets for his children. He welcomes the government's decision, saying that lifting the ban on foreigners will help the market develop.

In 2018, the Yangon exchange set up a task force to help companies go public. Some of the several dozen companies that received guidance are expected to submit applications to list later this year, said an official of the task force. Logistics company Ever Flow River and Myanmar Agro Exchange, which runs fruit and flower markets, are among the candidates. 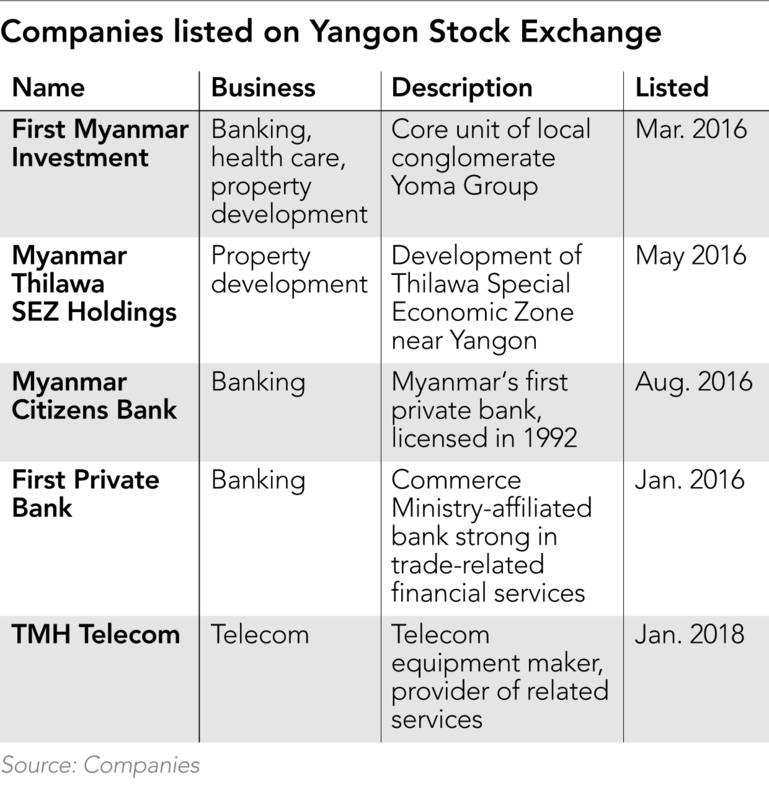 Myanmar's economic development has been stunted by years of international sanctions during its military rule. The country transitioned to civilian rule in 2011, after which sanctions were lifted in 2016.

Foreign direct investment sharply increased thereafter thanks to a series of reforms, but has since slowed.

Now the government is trying to attract more foreign money. In the insurance sector, for example, six foreign companies, including Japan's Tokio Marine Holdings, have been allowed to form joint ventures with local insurers.

"There are foreign investors willing to invest in Myanmar and local businesses hoping to raise funds from the market," said Shinsuke Goto, chief executive of Yangon-based Trust Venture Partners. "In Myanmar, where a few conglomerates control the economy, establishing a new capital market in which a variety of companies can obtain funds will be beneficial for democratization." Myanmar's financial markets still have a long way to go, besides creating new bourse and opening the doors wider to foreigners.

A recent World Bank report on ease of doing business ranks the Southeast Asian country 185th out of 190 economies in protection of minority shareholders' rights in related-party transactions and in corporate governance. This is on par with Libya and Micronesia, while lagging behind regional emerging markets Laos (174th) and Cambodia (110th).

"The development of financial markets is not only about expanding the investor base," said Takashi Kihara, economics professor at Dokkyo University in Japan and a co-author of research reports on capital markets in ASEAN. "It is necessary to strive to improve corporate governance and transparency when trying to increase the number of listed companies."

Because of Myanmar's lengthy military rule, the Yangon Stock Exchange launched later than its counterparts in Vietnam, Laos and Cambodia. But even after the transition to civilian rule, few companies in Myanmar can ensure the transparency needed to go public.

On Monday, United Nations investigators released a report on the economic activities of Myanmar Economic Holdings and Myanmar Economic Corp. The investigators called for financial sanctions against both companies, which are involved in at least 120 businesses and essentially controlled by senior leaders of the military.

This lack of transparency makes it difficult for investors to determine the political risk associated with backing Myanmar companies.