TOKYO -- The Nikkei Stock Average closed at a second straight 27-year high on Tuesday as investors took stock of a fresh lineup of leading Japanese blue chips that has shifted toward younger and more global companies since the bubble era.

The index gained 24 points from Monday's session to finish at 24,270, a height last seen in November 1991 amid the collapse of Japan's asset bubble. Comparing Tuesday's top 10 issues by market capitalization with those of 27 years earlier reveals major changes.

Four of the companies in Tuesday's top 10 had not yet listed in 1991. Technology and investment giant SoftBank Group -- Tuesday's second-place player at more than 12 trillion yen ($105 billion), behind Toyota Motor's 23 trillion yen -- went public in 1994 and has since staged rapid growth through fundraising in the equity and corporate bond markets. Third-ranked NTT Docomo -- the mobile unit of fourth-ranked Nippon Telegraph & Telephone -- listed in 1998. Telecommunications company KDDI, at No. 8, went public in 1993. And the 10th-ranked stock, staffing company Recruit Holdings, did in 2014.

Companies that have amassed overseas earning power are getting buy orders from institutional investors the world over, according to Richard Kaye, a Japan analyst with France-based Comgest Asset Management. 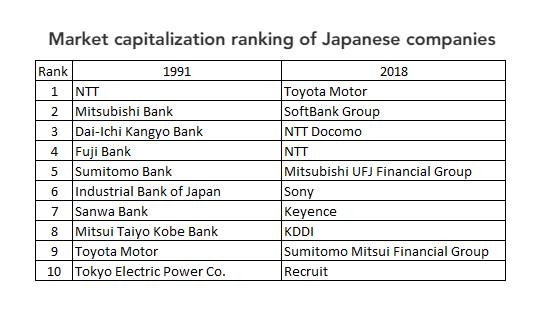 Banks occupied just two of the top 10 spots on Tuesday, with Mitsubishi UFJ Financial Group in fifth place and Sumitomo Mitsui Financial Group in ninth -- unlike 1991, when banks claimed seven places on the list. The industry has consolidated heavily since the bubble era. But even Japan's megabank trio of MUFG, SMFG and Mizuho Financial Group have a combined market cap of only around 21 trillion yen, or $184 billion -- less than half of JPMorgan Chase's $381 billion figure.

Toyota's first-place market cap was only around four-fifths of its pre-financial-crisis figure of 30 trillion yen in 2007.

In 1991, NTT topped the market cap rankings, with Toyota coming in ninth and Tokyo Electric Power Co. Holdings -- which had not yet adopted a holding-company structure -- rounding out the list at No. 10. Banks held second through eighth place.