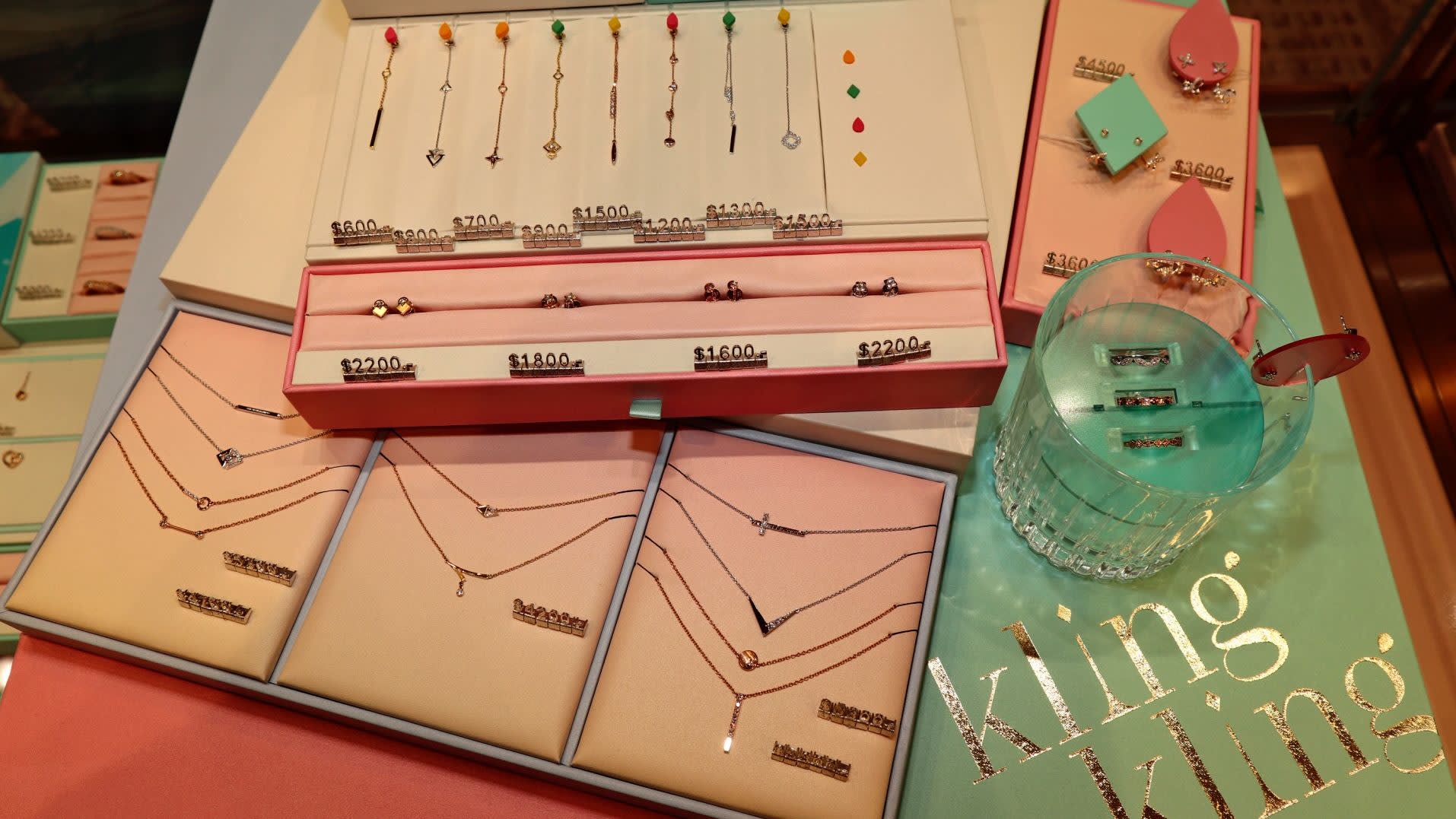 HONG KONG (Nikkei Markets) -- Shares of Chow Tai Fook Jewellery dropped to their lowest level in four months in the wake of protests in Hong Kong and economic headwinds in mainland China, with analysts cautious in their outlook for a recovery.

For the jewelry chain which has steadily expanded its exposure to Chinese consumers in recent years, the quarter ended Sept. 30 was a challenge as it battled a confluence of adverse factors. In the home market of Hong Kong, mass protests kept many mainland tourists away, while a weakened yuan made items priced in Hong Kong dollars more expensive to the remainder.

At the same time, rising gold prices and the effect of the Sino-American trade war appeared to weigh on sales in mainland China, where the company operates a majority of its nearly 3,500 points of sale.

The combined effect led to a 42% tumble in same-store sales growth by value in the geographic segment of Hong Kong and Macau during the previous quarter, in addition to a 7% decline by the same measure in China. Retail sales value of Chow Tai Fook's quarterly sales declined by 35% in Hong Kong and Macau while that in China grew 4%, driven by newly opened stores.

The absence of any clear signs of resolution to the protests in Hong Kong has seeded doubts about the path ahead.

"Given the macro uncertainty in the Hong Kong and Macau market, we remain cautious on the recovery outlook there," Goldman Sachs analysts led by Michelle Cheng wrote in a report on Wednesday, as they noted that the trend so far in October also appeared to be similar to that in the second quarter.

Protests in Hong Kong have over the past few months led to escalating violence, with the government refusing to agree to the demands, which include an independent inquiry into police actions, and universal suffrage. The Hong Kong Retail Management Association, a body of local retailers, earlier this month reported a 23% slump in August sales by value and forecast that the weak trend will continue in the coming months due to a substantial drop in inbound tourists and weak local consumption sentiment.

Founded in 1929, Chow Tai Fook is controlled by the family of billionaire Chairman Henry Cheng, who is also the Chairman of Hong Kong property major New World Development. The company had 3,490 points of sale worldwide as of Sept. 30, including stores in Japan, South Korea, southeast Asia and the U.S., in addition to Hong Kong, Macau and mainland China.

Chow Tai Fook's shares also appeared to be weighed by a profit warning for the half year ended Sept. 30. The company said on Tuesday it expects to record an unrealized loss of about HK$800 million to HK$1 billion on the mark-to-market value of gold represented by certain outstanding gold loan contracts.

Spot gold prices climbed 4.5% in the July-to-September quarter on top of a 9.1% increase in the preceding three months, resulting in losses on gold loan contracts that the company had entered into earlier. The unrealized loss shouldn't have any material impact on the group's cash flows and operations, and the losses should be recovered by corresponding gains on gold inventories when they are eventually sold, the company said.

Tony Li, an analyst at China Galaxy International, appeared more optimistic about Chow Tai Fook's prospects in mainland China, although he noted they were weaker than expected during the second quarter.

"Chow Tai Fook has been doing better than competitors in the past one to two quarters under a poor market environment, mainly because of its good product lines," Li said, pointing to the company's brands catering to consumers in different demographic segments.

But Li remained circumspect about Hong Kong. Even if one were to imagine a scenario where the unrest in Hong Kong were to end within a week, retail sales in Hong Kong will likely remain under pressure because of the yuan's weakness and the trade war.

"Will consumers snap up gold like before based on expectations that the prices will increase further? We haven't seen this happening so far, and mainland consumers are becoming more rational" in their spending, Li said.