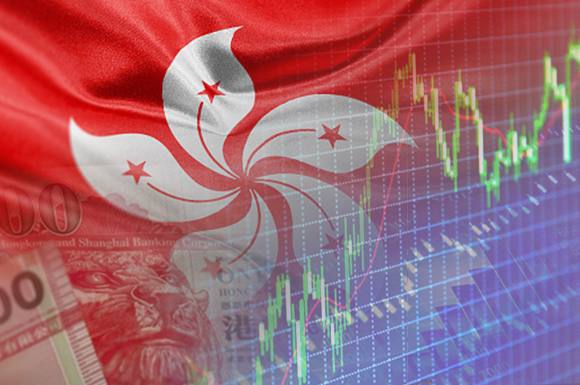 Fed Chairman Powell on Wednesday signaled, in a testimony before U.S. lawmakers, that the central bank is ready to lower interest rates at its meeting later this month, citing risks to the economy from trade-related uncertainties. The signal for an imminent move came days after U.S. payrolls data for June released last week proved to be better than expected, leading some participants who were anticipating an aggressive rate cut by the central bank to lower their expectations.

In Hong Kong, where policy rates move in tandem with U.S. rates because of the local currency's peg to the American dollar, the interbank money market rate with a one-month tenor headed lower for a fifth straight day.

Powell's remarks implied the Fed is "very bearish on the economy over the next few months, and grimmer economic conditions do not bode well for corporate earnings," Wong said. Still, the Hang Seng Index was likely to rise gradually in the third quarter, following stimulus measures by Beijing in recent weeks, he added.

The Shanghai Composite Index ended up less than 0.1%, after rising as much as 1% in early trading. The yuan traded onshore was little changed against the U.S. dollar at 6.8674. The Nikkei Asia300 Index of regional companies outside Japan gained 0.8% by late afternoon.

China Overseas Grand Oceans Group was among the notable movers in Hong Kong on Thursday, surging 15.1%. The Chinese property developer expects its net profit for the six months ended Jun. 30 to increase 75% to 85% from a year ago.

A-Living Services advanced 10.2% after the Chinese property management company said it expects consolidated net profit for the six months ended Jun. 30 to jump more than 50% from a year ago.

Leyou Technologies climbed 4.4%, after the Chinese game developer announced an agreement with a division of U.S. internet services major to co-develop and publish a free-to-play, massively multiplayer online game based on the fantasy literary title "The Lord of the Rings."

China Meidong Auto Holdings gained 5.1%. The Chinese automobile dealership operator said it expects net profit for the first half of this year to increase more than 35% from the same period last year.

Johnson Electric Holdings slumped 13.4% after it reported a drop in fiscal first-quarter sales and lowered its profit outlook for the six months ending Sep. 30.

ANTA Sports Products gained 1% after the sports goods retailer said it "vigorously" denies allegations contained in a document released by short-seller Muddy Waters, relating to the operating model of ANTA's retail business for the FILA brand in China. The latest release by Muddy Waters is the third part of its report on ANTA, which has denied each part of the report following its release.