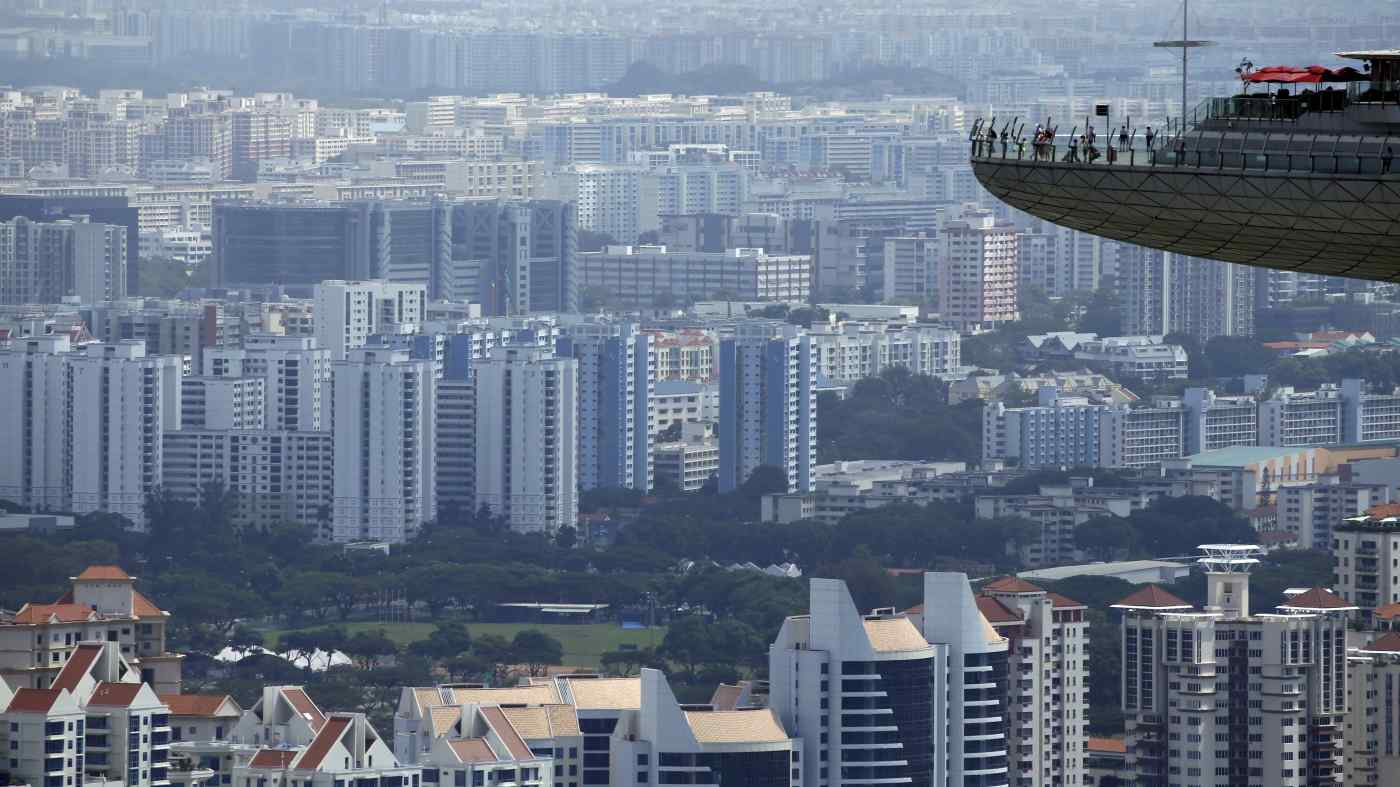 People look out from the observation tower of the Marina Bay Sands in Singapore. The value of commercial property investments in the city-state rose 72% to $1.9 billion in the first three months of 2019 from year-ago levels.   © Reuters
June 6, 2019 14:33 JST | Singapore
CopyCopied

SINGAPORE (Nikkei Markets) -- The economy may be slowing but there is little evidence of it in the city-state's commercial property market where investment is buoyant, thanks to rising office rents and government incentives to rejuvenate parts of the island.

According to data from Real Capital Analytics, the value of commercial property investments in Singapore rose 72% to $1.9 billion in the first three months of 2019 from year-ago levels, a sharp contrast to the 36% decline for the Asia Pacific region as a whole.

Hong Kong, for example, saw transactions fall 47% to $4.4 billion during the first quarter, while Japan registered a 52% decline to $5.7 billion.

Based on pending deals, investment volumes will be robust for the rest of the year, said Petra Blazkova, RCA's senior director for Asia-Pacific analytics.

The ebullience in the commercial property market contrasts with the caution in the housing sector, where the government is trying to keep a lid on home prices to ensure affordability.

Despite its small land area and population of just 5.6 million, Singapore is a popular real estate market in Asia among institutional investors helped by the presence of many banks and multinational firms. Last year, commercial transactions in the city-state amounted to some $9.5 billion, according to JLL.

Singapore has also become a much sought after Asian base for technology companies, ranking second after Bangalore in India in a report by Colliers last week.

Recent government initiatives that could lift activity in the commercial property market include incentives for developers to knock down office buildings in older parts of the central business district and replace them with hotels, residences and mixed-use projects in a bid to bring more life to the areas at night and on weekends.

Singapore is also allowing the city-state's two casino-resorts to expand, a move that will result in some 9 billion Singapore dollars ($6.5 billion) in new investments.

Marina Bay Sands has already agreed to pay S$1.3 billion for an adjoining 3.3-hectare site, while Genting Singapore's Resorts World Sentosa has set aside S$1 billion to buy new land and intensify the use of its existing site, Senior Minister of State for Trade and Industry Chee Hong Tat told Parliament last month.

According to the Business Times newspaper, a consortium involving Gaw Capital Partners, a real estate private equity firm, and Allianz Real Estate is in talks to buy the office and retail components of DUO, a large integrated development on the outskirts of the central business district, for around $1.6 billion. The 342-room Andaz hotel, which is part of the complex, has also been put up for sale.

Developer Oxley Holdings, which is trying to reduce its debt, is also looking to sell two adjoining hotels not far from the Orchard Road shopping belt in a deal that could be worth as much as S$1 billion, analysts have said.

In April, Oxley agreed to sell Chevron House, a 32-storey office building in the heart of the office district, to U.S. investment firm AEW for an eye-watering S$1.025 billion.

Singapore office rents have risen sharply over the past two years due to strong demand and limited supply. According to estimates from CBRE, Grade A office rents rose to S$11.15 per sq. foot in the first three months of this year from S$10.80 in the previous quarter and S$9.70 in the first quarter of 2018.

However, the city-state's economy has slowed, mainly due to weakness in the manufacturing sector. Singapore recently cut its growth forecast for 2019 to 1.5% to 2.5%, down from the earlier forecast of 1.5% to 3.5%.