SINGAPORE -- Manufacturing activities contracted in most Asian economies in January due to slowing global demand, with the Nikkei Purchasing Managers’ Index for ASEAN, Taiwan and Japan hitting the lowest in over a year.

The monthly Nikkei PMI survey asks companies in major Asian countries and regions, excluding China, about changes in output, orders and other business conditions compared with a month earlier. A PMI reading below 50 indicates contraction, while one above 50 points to expansion.

In January, 11 of the 15 sets of PMI data declined, up from nine in December. Slowing global demand stemming from a slump in the smartphone market as well as uncertainties over U.S.-China trade tensions weighed on the region, as many Asian economies are entrenched in China's supply chain.

The PMI for the Association of Southeast Asian Nations, comprising 10 countries, dropped from December’s 50.3 to 49.7, the lowest since July 2017, with the New Export Orders Index falling to 48.4 from 49.4.

"Export demand was still a key factor weighing on the sector’s performance, as trade tensions around the world caused export orders to fall for the sixth month running," said David Owen, economist at IHS Markit, which compiles the survey.

Among the seven ASEAN members monitored in the survey, manufacturing PMI for Singapore -- a base for electronics and precision engineering companies -- was the lowest at 45.6, dragging down the PMI for the whole economy to 50.1 from 52.7.

Singapore is in manufacturing slump, as industrial output in December was 5.6% lower than a month ago, according to official data. A recent government survey showed more manufacturers expected a less favorable business environment in the first half of 2019. 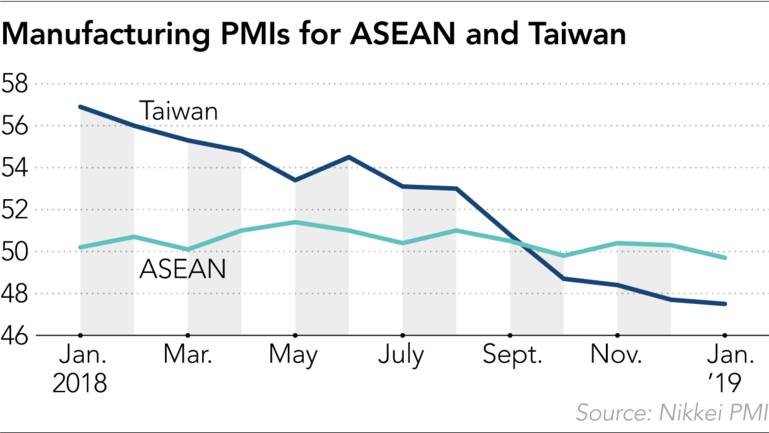 The Indonesian PMI fell to 49.9 from 51.2, contracting for the first time since January last year. The PMI for Philippines, Vietnam, Myanmar and Thailand remained above 50, but had all still declined from a month ago.

"Despite positive developments on the trade front, with the U.S. and China resuming dialogue, slowing Chinese demand appears to have taken its toll on the region and remains a cause of concern going forward," said Priyanka Kishore, head of India and Southeast Asia economics at Oxford Economics.

China’s official manufacturing PMI was 49.5 in January, contracting for the second month in a row, according to the National Bureau of Statistics.

Other manufacturing markets in Asia also struggled in January. Taiwan’s PMI dropped to 47.5 from 47.7, hitting the lowest since September 2015. Companies that reported lower export sales commonly linked this to reduced demand across key markets including China and the U.S.

Taiwan’s PMI data also showed a decline in manufacturers’ quantity of purchases, inventory and workforce numbers, which "suggests the [manufacturing] sector may continue to contract in the months ahead," according to the survey.

Japan’s manufacturing PMI also dropped to a 29-month low of 50.3 in January from 52.6 in December, due to falling export orders. Japanese electronics giant Hitachi took a hit from China's slowing growth. Executives said net profit for the April to December 2018 plunged by 68% from the same period a year ago in yen terms. Selena Ling, head of treasury research and strategy at Singapore’s Oversea-Chinese Banking Corp., said: "Further slippage in manufacturing PMI prints across Asia foretell of dark clouds for the regional growth prospects in the first quarter in 2019."

Among the few gainers in January was India, where the manufacturing PMI rose to 53.9 from December’s 53.2 backed by steady domestic demand.

About 21% of companies reported higher production volumes, while under 10% noted contraction. “Faster rates of increase in new orders were evident in the intermediate and capital goods categories, with a slight slowdown noted in consumer goods," the survey found.