SINGAPORE -- Manufacturers in Japan and South Korea are turning gloomier about the impact of the U.S.-China trade spat, with sentiment falling to its lowest point in years, the May Nikkei Purchasing Managers' Index showed.

Southeast Asian manufacturers, on the other hand, were more optimistic about the coming months, foreseeing steady domestic demand despite the trade uncertainty.

The monthly Nikkei PMI survey asks companies in major Asian countries and regions other than China about changes in output, orders and other business conditions, compared with the previous month. PMI readings below 50 indicate contraction, while those above 50 point to expansion.

In May, nine of the 15 sets of PMIs declined from a month earlier. The top performer in Asia was Myanmar at 54.2, while the weakest was Hong Kong at 46.9.

Asia's advanced economies showed a marked deterioration among manufacturers, with Japan's reading dropping to 49.8 in May from 50.2 the previous month. South Korea's index fell sharply to 48.4 from 50.2. Taiwan's PMI ticked up to 48.4 from 48.2, but remained in the contraction zone for the eighth consecutive month.

East Asian economies have been hit hard by the U.S.-China trade tensions since late last year, as their electronics and other exports to China slowed. With Washington expanding tariffs on Chinese imports in May, and the prospects for trade talks between Washington and Beijing growing more uncertain, manufactures in East Asia are fretting about the future, the survey revealed. Japan's future output index, an indicator of manufacturers' sentiment for the next 12 months, fell to 49.7 in May, the lowest point since November 2012. "Re-escalated trade tensions between China and the U.S. merely add to existing concerns for manufacturers," said Joe Hayes, an economist at IHS Markit, which compiles the PMI survey. "Subsequently, businesses cast a downbeat assessment for the year ahead for the first time in six and a half years."

South Korea's future output index also fell to its lowest level since August 2016, at 50.7. Manufacturers faced weak exports to the country's key trading partners, including China and Japan, in May, the survey found.

Exports dropped 9.4% on the year in May, according to official South Korean trade statistics. "The slowdown in exports was mostly due to an intensifying U.S.-China trade dispute, a sluggish semiconductor industry, and a slowing Chinese economy," the trade ministry said.

Taiwan's future output index also dropped to 49.2 in May, the lowest reading in seven months.

By contrast, the outlook was brighter for the Association of Southeast Asian Nations, with the bloc's future output index jumping to 72.6 in May from 66.6 in April, its highest level since November 2016. Five of the seven countries surveyed in ASEAN had a more positive outlook, as manufacturers predicted steady domestic demand. 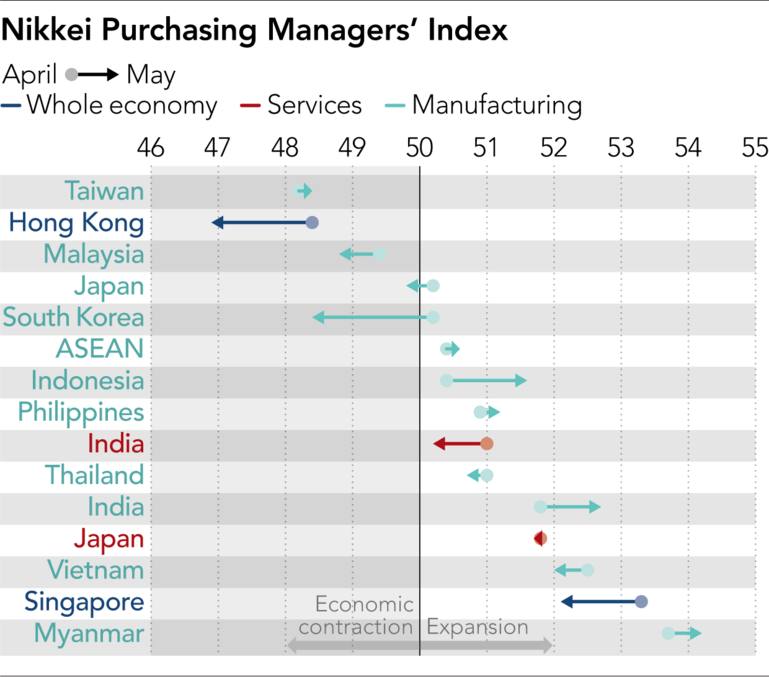 In Indonesia, 75% of companies forecast higher output levels over the next 12 months. Reasons for optimism included new product releases, higher sales forecasts and improved stability following the recent presidential election, according to the survey. Indonesia's headline PMI rose to 51.6 in May from 50.4 the previous month.

Similarly, in Vietnam, 59% of the companies were confident that output will rise, citing improvements in new orders and the launch of new products. Vietnam and other Southeast Asian nations are seen benefiting from the U.S.-China trade tensions, as they may serve as an alternative production base for manufacturers operating in China.

Overall, ASEAN's manufacturing PMI rose to 50.6 in the latest survey, from 50.4 in April. The index for new export orders stayed above the 50-point expansion line for the second straight month, coming in at 50.1.

However, the region's optimism may not last. "Export demand from China may be damaged once more, possibly leading to another period of decline in foreign sales," warned David Owen, an economist wit IHS Markit, given the additional tariffs imposed by the U.S.

This is the final month that the 15 Asian PMIs will be published by Nikkei.