TOKYO -- Tokyo's Nikkei Stock Average is set to record its first annual decline in seven years, say fund managers and strategists, after the index closed down more than 11% on Friday, compared to the end of last year.

The chances of a rally strong enough to reverse the decline were looking unlikely just four trading days away from the end of 2018, analysts said. Other Asian stocks including China, Hong Kong and South Korea are not looking much brighter.

On Friday, the Nikkei average hit a new low for the year of 20,166 points, down 2598 points on the end of 2017, with investors losing confidence following the Dow Jones Industrial Average plunging to a 14-month low.

"There is no way the index can recover more than 2,000 points in the days we have left," said one equity sales manager at a leading foreign bank in Tokyo.

The drop on Friday occurred after U.S. President Donald Trump refused to sign a Senate-passed spending bill, which increases the chance of a partial government shutdown, and Defense Secretary Jim Mattis announced his resignation. Looming concerns over the U.S. economy have also continued to affect investor sentiment.

The week turned out to be extremely volatile for the Nikkei average, which dropped nearly 6% in just five days. On Thursday, shares of more than 1,000 companies on the first section of the Tokyo Stock Exchange recorded their yearly low the same day, the largest number since October 2008. On Friday, the index came close to breaking the 20,000-point mark.

The U.S. Federal Reserve hiked interest rates on Wednesday, while also signaling the economy's slowdown by projecting dovish outlooks for 2019. The Fed expects two rate hikes next year instead of three.

Until 2017, the Nikkei average had recorded an overall rise for six consecutive years, driven mainly by Prime Minister Shinzo Abe, who took office in December 2012, and his economic policies, known as Abenomics, which included monetary easing as well as fiscal stimulus. 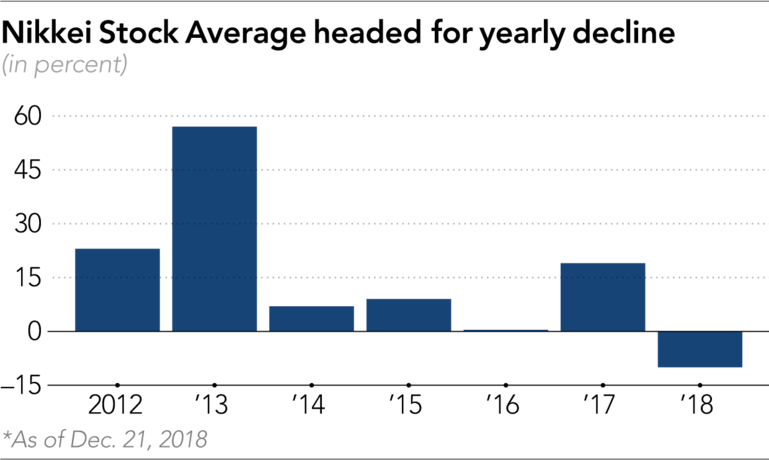 High hopes for a new government and a weaker yen led global investors to inject capital into the Japanese market, leading the Nikkei average to rise more than 20% in 2012, as well as 56% in 2013.

Although at a lower percentage, the index continued its annual climb. An upbeat corporate earnings forecast, due to an extended weakening of the yen, prompted it to surge to a 27-year high in early October this year, to 24,270.

However, the rising tensions between Washington and Beijing have dampened the outlook for the global economy, most notably China's slowdown. The higher U.S. interest rates have also led to sell-offs in emerging markets, and this has sparked volatility in markets worldwide.

Along with Japan, China's Shanghai composite index has dropped more than 20% in 2018, with Hong Kong's Hang Seng index and South Korea's Kospi index down more than 10% as of today. Taiwan and Singapore are also in negative territory.

Meanwhile, the Dow Jones has fared better, declining 7% as of Thursday.

Ryoma Sugihara, head of equity flow sales at Societe Generale Securities in Tokyo, said, "There were too many bad events in 2018." He added, "The China-U.S. trade war weighed on market sentiment throughout the year, while central banks changed policies, and political issues in countries like Italy sprang up."

With so much uncertainty surrounding the global economy, companies became cautious in their investment planning. Some companies that operate in China were also hit by the impacts of the trade war, resulting in companies reducing their earnings forecasts.

Among the company shares included in the Nikkei benchmark, those hit particularly hard were cyclical stocks like Mitsui Mining & Smelting, semiconductor wafer supplier Sumco, and electric cable maker Fujikura, whose stock prices have dropped more than 50% this year.

Kyoya Okazawa, head of institutional clients and global markets in the Asia-Pacific at BNP Paribas Hong Kong, raised "uncertainties like Brexit and China-U.S. relations" as the main reasons for global investors to be fairly quiet for the first few months of next year. "They will want to grasp the outcomes of these events and the impact on the global economy. It will be difficult to shift investment positions and portfolios with confidence," he said.

J.P. Morgan's Asia-Pacific equity research department stated in a report that lower growth rates for company earnings will make it "difficult to be bullish on Japanese equity in 2019." However, with the Nikkei index already experiencing subpar performance in 2018, "there will likely be limited downside exposure," the report added, siting 20,500 as the lowest target range for the year.