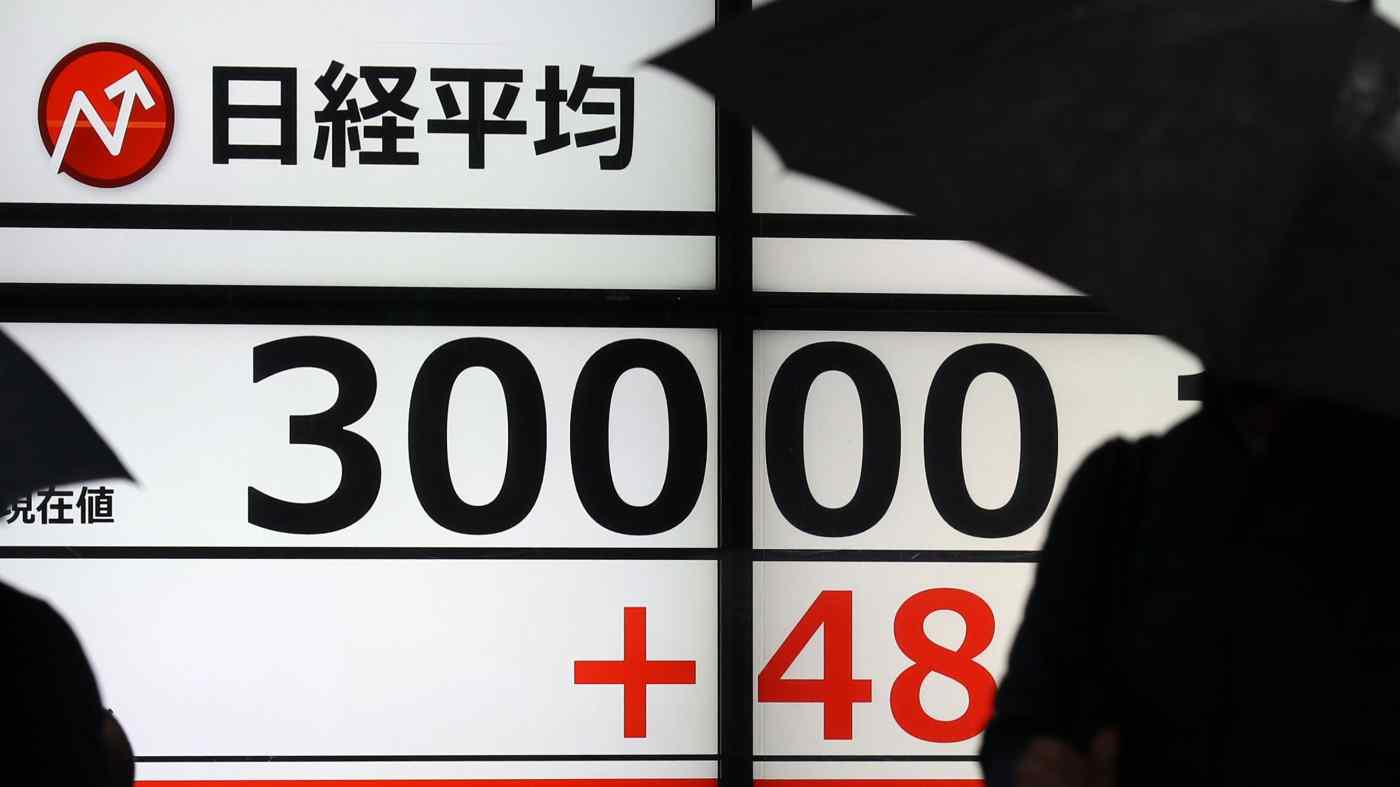 The blue-chip Nikkei index jumped over 500 points, or nearly 2%, to hit its highest level since August 1990, when the asset bubble burst in Japan. The broader Topix gauge rose 1% to a three-decade high.

Despite finally regaining the 30,000 level, however, the index remains well behind global counterparts in terms of long-term recovery.

Monday's rally followed positive news over the weekend and into the working week. On Sunday Japan's Health Ministry officially approved the coronavirus vaccine developed by U.S. drugmaker Pfizer. The country plans to begin vaccinations this week, starting with health care workers. Investors welcomed the progress, and hopes are rising that Japan's third wave of coronavirus infections will soon be brought under control.

The acquittal of former U.S. President Donald Trump on charges of inciting an insurrection further added to investors' appetite for risk assets. With the uncertainty around the impeachment trial now over, investors believe President Joe Biden's administration will move on to pushing the $1.9 trillion COVID-19 relief plan. 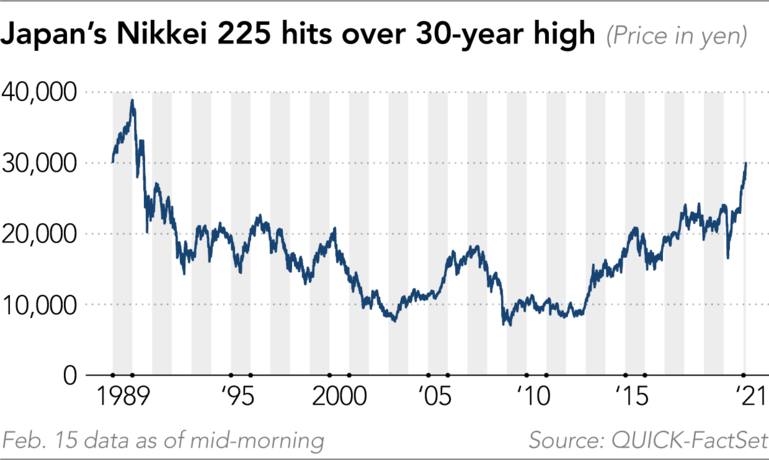 The Nikkei index has risen more than 1,800 points, or close to 7%, in the last two weeks. The strong momentum has been supported by better-than-expected earnings announcements from Japanese companies, which has encouraged investors to pick up undervalued stocks, mostly in sectors that were hit hard last year amid the pandemic, such as steel, mining, automobiles and retail.

Shares in retail group Aeon were up 2%, while Sumitomo Metal Mining jumped more than 1%. Semiconductor stocks, which have become an investor darling amid a surge in pandemic-driven demand, also rose. Japanese oil and gas company Inpex, meanwhile, gained 4% as the price of oil climbed to a more than one-year high.

Shoji Hirakawa, chief global strategist at Tokai Tokyo Research Institute, warned however that the Nikkei benchmark will likely reach its peak in February and then be hit by active profit-taking. "The Tokyo market has rallied at a very high pace. More investors will be inclined to sell rather than buy," he said.

The Nikkei index has risen nearly 9% since the beginning of this year, while other benchmarks like the Dow Jones Industrial Average remain at about a 3% gain. The Nikkei has also outperformed other indexes compared to a year ago, showing a strong rebound since the coronavirus outbreak.

Over the long term, however, the Japanese benchmark's recovery pales next to those in the U.S., as well as elsewhere in Asia.

The Nikkei Index touched an all-time high of 38,915 in December of 1989 during the asset-inflated economic boom in Japan. Shares crashed shortly after following the central bank tightening its monetary policy in response to overvalued assets, and the index has yet to fully recover.

The Dow, meanwhile, has risen to a level about 12 times higher than in mid-1990, while mainland China's benchmark Shanghai Composite Index has risen similarly since its launch in 1991.

Former Prime Minister Shinzo Abe attempted to jolt the Japanese economy out of its decades-long stagnation in 2012 with his "three arrows" economic policy, which included unprecedented monetary easing by the central bank.

The Bank of Japan soon began snapping up government bonds and later ETFs, making the bank a source of vital support for the Tokyo market. In 2016, the BOJ introduced its negative interest rate policy in order to weaken the yen and lower corporate borrowing costs.

Over the last year the bank has aggressively ramped up its lending and asset-buying even further amid the pandemic -- last March, it decided to increase its annual purchases of exchange-traded fund securities to 12 trillion yen ($112 billion) from 6 trillion.

Continuous monetary easing policies by the Japanese and other major central banks have led to an increase in market liquidity, pumping shares globally higher.

The slow recovery of Japan's stock market despite this excess liquidity has been blamed in part on the country's heavy reliance on "old-economy" companies and lack of fast growing tech players, like Google and Apple in the U.S., and Alibaba and Tencent in China.