Bankers especially are pitching Hong Kong to fast-growing technology companies that have high brand recognition among Chinese investors, with Nasdaq-listed e-retailer JD.com and internet search company Baidu at the top of their list.

As many as 27 U.S.-listed Chinese companies are in their sights, the Nikkei Asian Review calculates. Asian-based bankers said several businesses had shown early interest, drawn by the prospect of smitten local investors.

"We are actively promoting a listing in Hong Kong to a clutch of companies we believe will be well received by Chinese investors," said one of five equity capital bankers that Nikkei interviewed. "My competitors are also meeting companies and advocating such a move. We hope to get at least two to four companies to begin work for a secondary listing as early as January."

Among the attractions of a Hong Kong listing, which would follow e-commerce titan Alibaba's $13 billion debut in November, are the allure of an active local investor base combined with fears that the U.S. might eventually force Chinese companies to delist amid the two countries' ongoing trade dispute. 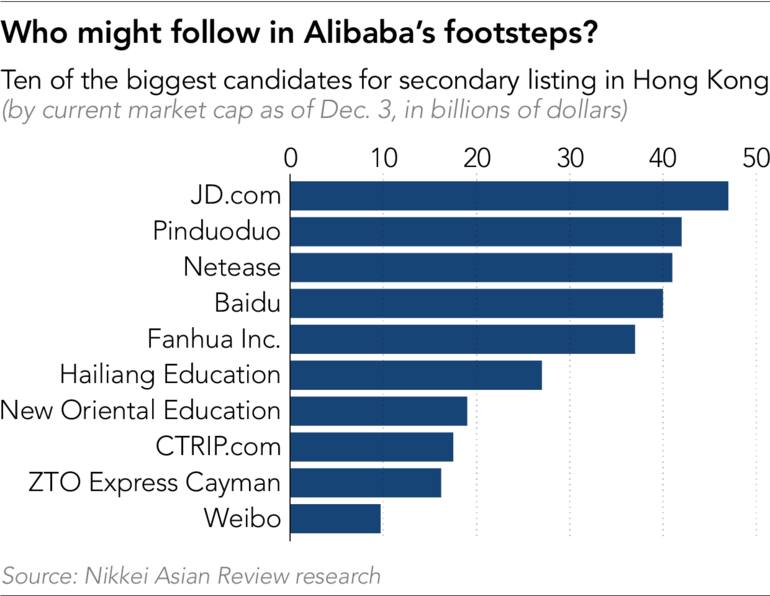 Beijing, which is keen to have Chinese companies move closer to home, also wants to show that Hong Kong remains open for business despite six months of pro-democracy protests.

About three-quarters of the businesses targeted by bankers are pure technology companies or technology-backed service providers such as e-commerce platforms.

"After Alibaba's listing, interest among Chinese companies listed in New York to tap the Hong Kong market is ... there," said David Chin, head of investment banking for the Asia-Pacific region at UBS.

Bankers cast their eyes on the more than 150 U.S.-listed Chinese companies, 50 of which have only a U.S. listing. This smaller group has a combined market value of $500 billion.

The target list has been winnowed further by pitching to companies that are profitable, have liquid shares and meet Hong Kong's secondary listing requirements.

Though that would exclude e-commerce platform Pinduoduo, which listed in New York only in July 2018, bankers are encouraging the $43 billion company to launch once it meets the two years of financial reporting requirements.

JD.com and Pinduoduo declined to comment, while Baidu did not respond to inquiries.

Chinese tech companies such as Alibaba have long sought the prestige and access to capital that come from deep markets such as the New York Stock Exchange and Nasdaq. But that is changing as Beijing encourages companies to return home and burnish the reputation of local exchanges.

The threat by President Donald Trump's administration of a forced delisting from the U.S., combined with extra requirements to meet stringent American auditing and accounting standards, fuel greater interest in a secondary listing.

"Measures such as curbing investor access to Chinese companies [serve as] a very strong weapon for the U.S., as Beijing can't retaliate in kind," said Frank Benzimra, head of Asia equity strategy at Societe Generale.

"While the threat of delisting will take time, China would not like to expose its companies to such a risk, and hence it is more than likely that it will push for the companies to come closer to home," he said. "Hong Kong, with its liquidity and the Stock Connect scheme, will be a natural choice."

Another allure of Hong Kong is the inherent appetite of Chinese retail and institutional investors for homegrown technology names, especially as they have enjoyed little or no access to many such foreign-listed companies due to China's capital account restrictions.

The release of their pent-up demand was evident in Alibaba's Hong Kong stock issue on Nov. 26. The issue, which was heavily oversubscribed, debuted at HK$176 per share and rose to a high of HK$204 two days later. The shares closed on Monday at HK$196.

The Hong Kong Stock Exchange has made clear that it will lay out the welcome mat for other companies seeking to follow suit.

"I'm really thankful that Alibaba after five years of traveling afar finally came home," Charles Li, chief executive officer of the Hong Kong Stock Exchange, said after the company's listing. "I'm really confident that many other companies ... will ultimately come home. We will be here ready for them."

Domestic investment in companies with a secondary listing in Hong Kong is possible through the Stock Connect program, which lets mainland investors buy shares listed in the territory. While inclusion in the scheme requires a review by Chinese stock market regulators, bankers expect the big technology names to make the cut.

Lawyers, bankers and traders also said Hong Kong's ability to attract global and Chinese fund managers made it a better choice over mainland stock exchanges, such as Shanghai's lightly regulated Nasdaq-style STAR board.

"To me, Hong Kong is the natural choice for a secondary listing at this juncture," said another equity capital markets banker. "Valuations might be higher in China, but the access to a diversified investor base is only available in Hong Kong. With some risk of a U.S. delisting, such technology companies need to be in an international market."