DENPASAR, Indonesia -- Construction of new villas in Bali is defying the steep economic downturn that the coronavirus pandemic has caused for the tourist hotspot.

With around 60% of its gross domestic product derived from tourism, Bali's economy has been the hardest hit in Indonesia by the COVID-19 pandemic. The country's central bank reported negative growth of just under 11% for the province in September while the Ministry of Labor reports at least 80,000 tourism workers lost their jobs.

The effect on the island's all-important accommodation sector has been devastating. Only 3% of Bali's 130,000 hotel rooms are occupied while rental rates for the island's 4,000 villas have been slashed by as much as 85%. The property market has hit a wall. "You can't sell anything at the moment," a prominent real estate agent told Nikkei Asia on condition of anonymity.

However, the building of new villas -- mainly for people from Australia, Europe and the U.S. -- appears to defy this calculus. Construction activity is most pronounced in the surf mecca of Canggu, where a property boom saw land values increase 40 to 50 times in the last 10 years. Some of these projects were started or conceived before the pandemic. But many are new projects commissioned by foreign investors.

"We are receiving more inquiries from expats living in Indonesia than ever before -- people who out of the blue decided to invest. It has really surprised me," says Baptiste Dufau of Bali Sandstone Consulting.

Manuele Mossoni, director of architectural company 2M Design Lab, says his "business has increased 20% to 30% compared to last year." Terje Nilsen, director of Seven Stones Indonesia, a property consultant that caters to foreign investors, also reports an uptick in trade, stressing "This is our best business year in 15 years in Bali." Construction projects were started recently in the surf mecca of Canggu, where a property boom saw land values increase 40 to 50 times in the last decade. (Photo by Ian Neubauer)

Chief among market forces driving the phenomenon is investor confidence that Bali, which attracted 16 million visitors in 2019, is going to be more popular when COVID vaccines become available and travel resumes.

The changing nature of office work during the pandemic is another factor projected to boost demand for luxury housing in Bali. A survey commissioned by The Straits Times in Singapore found eight of 10 workers prefer working from home, while a survey by BBC's Future Forum found only 12% of respondents want to return to full-time office work.

"After the lockdowns, a lot of people have figured out it's better living in Bali than in Melbourne or Hong Kong," says investment consultant Nilsen. "I think we are going to see a massive rise in the number of people coming here, and it will be different from the tourist market of the past [driven by people] who came here for a few days or weeks. They will be residents with long-term commitments."

Nilsen is also receiving a high number of inquiries for villas and office space from companies planning to relocate to Bali. "Previously the 'digital nomads' movement in Bali was dominated by professionals working in hospitality and IT, but now the proposition is attracting a much wider spectrum of businesses," he explains.

"Our newest client is a radiology firm that interprets X-rays online for hospitals all over the world and they want to sit down and do it in Bali. We are also hearing rumors that some big tech companies are going to move their headquarters here because they can find access to a good pool of local and expat talent."

Numbeo, the world's largest cost-of-living database, ranks Bali as the 370th least expensive place to live out of 589 ranked cities in the world. It places the cost of living for a single person, excluding rent, at $594 a month or $2,097 for a family of four.

David Sutcliffe, a former fund manager from the U.K. who's worked remotely in Bali since 2016, believes the quality of life on the island is without par.

"The lifestyle here is unparalleled. The private schools are good, there's lots of expertise for startups, people are constantly building innovative and interesting businesses, there are great restaurants, leisure and travel opportunities, the weather is always nice," said Sutcliffe, now a cryptocurrency investor.

He adds that the Indonesian government is making it easier for foreigners to establish themselves. "The recent slew of new laws and regulations, known as the Omnibus Bill, is a signal to investors of the business-friendly direction this country is going in the long-term."

Having rented for years, Sutcliffe, who plans to make Bali his home for the foreseeable future, is now building a villa of his own. "If I was to compare it to what I could get back home, there is no comparison. For about $300,000 -- less than the price of a small two-bedroom flat in Greater London -- I can build a family home with a tropical garden and swimming pool 500 meters from the beach and 10 minutes scooter ride from the central business district," he says.

"It will be my primary residence, not a rental business. But I also consider it a solid vehicle for my wealth because I believe people and investors are going to be drawn to Bali for many years to come." 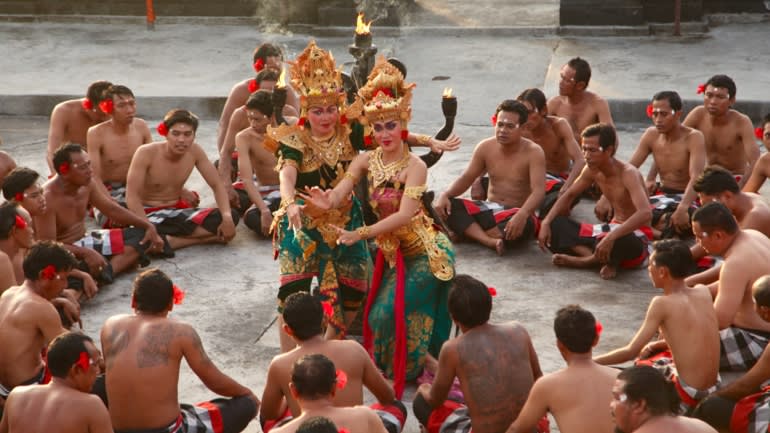 Tourism in Bali has been struggling because of travel restrictions due to the coronavirus pandemic. (Photo by Ian Neubauer)

Architect Mossoni told Nikkei that discounted construction costs are another reason expats like Sutcliffe are now building villas. "The price of some raw materials like wood has gone down because suppliers bought so much last year when they were able to charge two to three times the real value [in Bali]. But now they are willing to come back to the prices of five or six years ago to maintain cash flow," he explains.

Ironwood, an indigenous hardwood used for decking in Bali, is a textbook example. At the start of the year, it was $57 per sq. meter. Now it is being offered for $32 to $42. Suppliers of imported kitchen and bathroom tapware are holding clearance sales with up to 60% off, while furniture and electrical goods stores are willing to negotiate on just about anything.

There is also a much bigger pool of labor for construction, with contractors offering some discounts compared to previous years thanks to low demand for construction all over Indonesia.

Indonesia fell into recession for the first time in two decades. The country's real GDP plunged 3.49% in the three months ended September from a year earlier. The slowdown follows a 5.32% contraction in the previous quarter, plunging the archipelago into a recession -- defined as two consecutive quarters of negative growth.

The cost of buying or leasing land, which has fallen 10% to 15% is also incentivizing builders. "Last year land prices in Canggu reached a point that it was no longer profitable for anyone and the bubble burst," Mossoni says. "But developers are willing to invest at this crazy moment in time because they are certain the market will go up again."

Dufau of Bali Sandstone Consulting agrees: "I think in the next two or three years land prices will pop up again the same way they did after the terrorist bombings [of 2002 and 2005] and the Mount Agung eruption [in 2017]. As the pandemic is over, people will be rushing in."