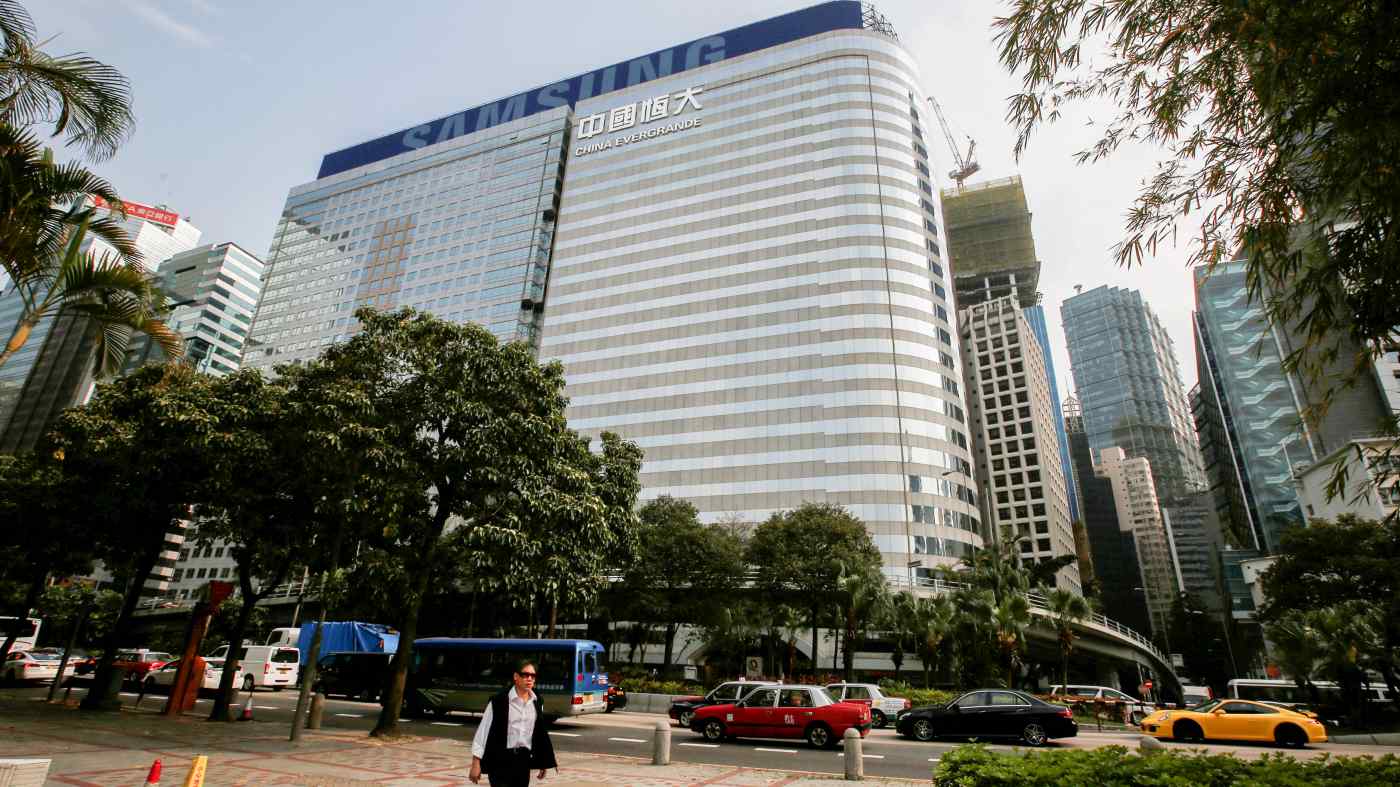 HONG KONG -- Xu Jiayin, China's third-richest person, built his wealth on the back of a corporate borrowing binge and has never been shy of betting on grand plans.

The tycoon, who previously worked at a state-owned steel factory for a decade and then at a trading firm for four years before moving into real estate in 1996, last week unveiled another such plan to restore the diminishing luster of his company, China Evergrande Group.

This time he wants to reverse course and slash debt by selling land and accelerating sales at China's largest and most indebted property developer.

The catch: He wants to do all that just when the world's second-largest economy is expected to grow at its slowest pace in four decades amid the coronavirus pandemic. The company, while staring at billions of dollars in maturing debt and declining cash levels, is also splashing money for building electric vehicles.

The one silver lining for Xu, whose net worth is estimated to be $22.4 billion by Forbes and is known as Hui Ka-yan in Cantonese-speaking Hong Kong, is that investors are still eager to snap up the company's bonds, albeit at much higher interest rates.

Xu's new strategy -- summarized as "grow sales, control scale and reduce leverage" -- envisages 33% sales growth this year to 80 billion yuan ($11.3 billion) and to reach 100 billion yuan next year even as his closest rivals have signaled falling demand. He also wants to cut by half Evergrande's debt pile, which stood at 800 billion yuan at the end of 2019.

After unveiling the new plan, Xu acknowledged investors' nervousness amid falling bond values and asked them to "relax."

"In the past 20 years, there has not been a single default of bonds or any other financial instrument," he said of his company. "We can pay back the principal and the interest at the same time without any default."

Matthew Chow, director at S&P Global Ratings, is not as sanguine as Xu and said Evergrande's plan is riddled with too many ifs. S&P rates Evergrande debt at B+, a junk rating that is four notches below the lowest investment-grade rating.

"For Evergrande, the key to deleveraging remains whether the company can maintain the strong cash inflow given the economic headwind, and exercise discipline over spending," Chow said. He said that while a long-planned backdoor listing in the mainland would improve the company's finances, "at the moment uncertainties still remain." Evergrande raised 130 billion yuan from investors in 2017, to be converted into equity as part of a vow to list the company through a subsidiary on a mainland exchange by January of this year. But that plan has been delayed for an additional year and until the listing takes place, the funds raised are treated as quasi-debt, creating an extra burden on the group's balance sheet.

Analysts and investors say that achieving the twin objectives of sales growth and a decline in debt levels is a long shot as long as the company is burning cash. China's decadelong property boom was already cooling, with Beijing in recent years implementing measures to curb speculation. The trade war with the U.S. and the economic convulsions brought on by the coronavirus outbreak also is hampering people's appetite to purchase new homes.

China Vanke, the country's third-largest developer, last month said that survival of the real-estate sector in the country was becoming a challenge, while Country Garden Holdings, the second-largest developer, warned that the coronavirus was hurting demand. China's property sales dropped 21% in the three months ended March 31, according to the National Bureau of Statistics.

While Evergrande bucked the trend and saw its sales grow 25% in the first quarter, it came at a cost. The company offered a 22% discount on residential properties in February and it still is offering a discount as deep as 19% at 619 sites nationwide for April, according to its WeChat account.

"An unfolding global recession may continue to depress demand for property in China," S&P said in a note this week. "Demand remains highly dependent on consumer and investor-buyer confidence, which is no sure thing given the global economic downturn." The ratings agency expects national contracted sales to drop as much as 10% in 2020.

Leif Chang, head of Nomura's China property research team, said that "without further price cut and promotion, I doubt the feasibility of [Evergrande's] aggressive sales growth target, which is critical to support its deleverage." He said that if the company continues "to offer price cuts and sales promotion, it might eventually achieve such aggressive sales target at the sacrifice of margin."

Core profit margins, a measure of operating efficiency, stood at 4.9% in 2019, half that from the previous year, and are expected to stay around that level in 2020, according to Citigroup.

Offering such big discounts is a rather unusual move even during the festival promotion seasons in China. None of Evergrande's rivals have followed suit despite facing waning demand themselves.

With demand in question and cash in hand declining, Chang said refinancing debt could be expensive for the company.

Cash levels stood at 228.8 billion yuan at the end of 2019 compared with more than 300 billion yuan in 2016. Short-term debt stood at 372 billion yuan with $4.8 billion of offshore bonds maturing this year, according to regulatory filings.

Almost a quarter of the company's borrowings are non-yuan denominated, the highest level in at least five years just as borrowing costs are surging, because investors demand higher interest rates for taking on the risk. Evergrande raised $6 billion this year at rates as high as 12%, compared with well under 10% previously. Its average borrowing cost has risen to 9% from 7.8% four years ago.

The company's 2025 U.S. dollar-denominated bond this week is trading at 69% of face value. The notes were trading as low as 58% on March 23 and had risen to 76% after the plan to cut its leverage was revealed, only to dip again. Equivalent bonds at Country Garden are trading at 92% of face value.

Evergrande's shares in Hong Kong have lost a quarter of their value in the past month or double the decline of the benchmark Hang Seng Index.

With its offshore bonds quoting at default levels, the company tried earlier this year to buy back as much as $2 billion of them. However, there were only a few takers, Xu said.

Sheldon Chan, a Hong Kong-based associate portfolio manager at T. Rowe Price, says the recent sell-off in Chinese property developer bonds was overdone and he has used the slump to buy more of the bonds.

"I don't expect widespread deleveraging across the sector," Chan said. "There will be some names who have to do that. But we certainly think they can sort it out. They will survive."

Still, some investors are seeking clarity on Evergrande's direction at a time when the company is investing in building up 14 models of electric vehicles that have yet to be unveiled. The company spent 15 billion yuan in 2019 and plans to spend another 10 billion yuan over the next two years.

Griffin Chan, an analyst at Citigroup, said that Evergrande's fiscal 2019 results "reflect the challenges on its margins after price cuts and its new electric vehicle business," which showed a 3.2 billion yuan loss. The company's core profit for the period fell 48% to 40.8 billion yuan, according to a filing with the Hong Kong Stock Exchange.

Even if its goal can ultimately be realized, investors "will need more clarity on earnings growth and track record on deleveraging," he said.