The property management unit of Sunac China, the country's fourth-largest developer, made its Hong Kong market debut Thursday. Sunac Services closed up 21.9% from their issue price at HK$14.14.

Sunac Services joins 13 others in raising a total of $5 billion this year, Dealogic data shows, with units of Evergrande Group and China Resources Holdings set to add $3 billion to that tally.

The IPO activity this year compares to $1.6 billion raised last year by such companies and $1.4 billion in 2018. It is giving investors access to fast-growing, asset-light businesses with steady fees and commissions, in contrast with the boom and bust cycle facing leveraged property developers.

Developers also face China's push to limit their annual debt growth to around 15%, based on a widely publicized but still unofficial "three red lines" leverage policy, as Beijing aims to snuff out systemic risk. The industry expects the rules to take effect in early 2021.

"If the mooted policies continue for the next several years, sector growth may slow," said Esther Liu, a credit analyst at S&P Global Ratings. "We may also see accelerated sales of projects or even company stakes should issuers hit refinancing challenges. To control debt growth, more firms may turn to equity raising."

China's property sector accounted for 28.7% of the $24.4 trillion in outstanding yuan loans issued by the nation's banks during the second quarter, and this figure does not include financing offered by the country's much larger shadow banking industry.

Debt levels are considered large enough to send ripples through China's $50 trillion financial system. Concerns about a default by a major developer drive worries over potential cross-defaults on loans from banks and trusts.

Regulators under the "three red lines" policy would track three ratios -- liabilities to assets, net debt to equity, and cash to short-term debt -- before letting a developer borrow further. A developer could increase debt by 5% annually for each red-line threshold that it meets, for a maximum debt expansion of 15%.

The cap for debt-to-assets will be set at 70% and net debt-to-equity will be capped at 100%, Chinese media reports indicate, while developers also should have enough cash to match their short-term liabilities.

S&P estimates only 6.3% of the rated developers would meet the thresholds across the three categories, which means most would need to make discounted sales, raise equity or rein in land and construction expenditures.

Though the property sector has rebounded from the impact of the coronavirus pandemic, signs of a slowdown are emerging. Property sales by floor area rose 7.3% on the year in September, down from robust 13.7% growth in the previous month. New construction starts measured by floor area declined 1.9% in September compared with a 2.4% increase in August.

Analysts expect the clampdown by regulators to result in virtually no sales growth for 2021, along with a 5% decline in property prices.

This outlook is pushing developers to consider raising equity. But selling stakes at the parent level is considered unrealistic given low valuations: the biggest companies trade at four to 12 times forward 12-month earnings, Capital IQ estimates, down from over 20 times a few years earlier.

Besides, investor appetite for equity offerings from property developers has been lukewarm at best. China Evergrande Group, Asia's largest private-sector debtor, last month raised just $555 million at a 14.7% discount compared with a target of $1.09 billion.

As a result, developers are resorting to spinoffs.

Evergrande, which aims to slash its $125 billion debt pile by half by 2022, plans a secondary listing in Shanghai for its Hong Kong-traded electric vehicle unit. The group also is holding preliminary talks with investors for a listing of its property management unit after receiving the Hong Kong exchange's approval, sources have said.

The listing of business units appears to be the most attractive option for developers, as these draw a median multiple of 20 times their 2021 estimated earnings. Though recent listings have slipped below the offer price, investors are still bidding for the shares. 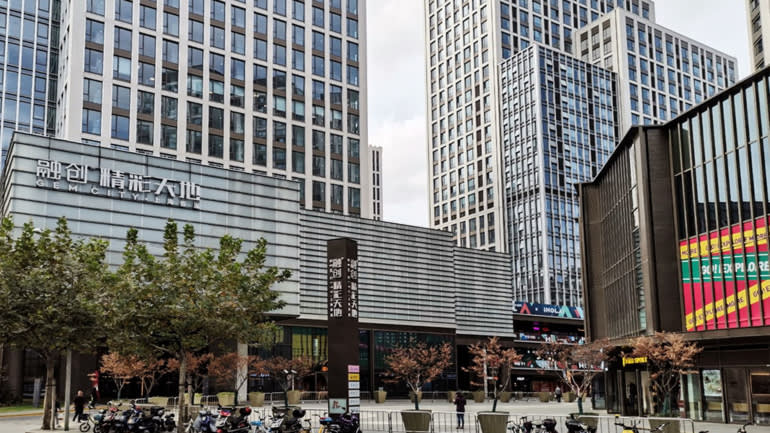 Sunac Services, which attracted Chinese internet giant Tencent Holdings as an IPO cornerstone investor, said its retail offering was oversubscribed by 10.4 times while the institutional portion netted bids for 4.9 times the shares on offer.

That came as Jinke Smart Services, which listed on Tuesday, dropped 0.4% below offer price. Shimao Services Holdings has slipped 3.6% below its issue price and KWG Living has sunk 28%. The latter two companies made their trading debut Oct. 30.

"The pipeline of new IPOs of large-scale operators competing for liquidity likely led to the recent derating of the sector in our view, with investors switching to the new names," said Cheng Wee Tan, a Singapore-based senior analyst at Morningstar. "Post listing of the new IPOs, it is now down to execution of the gross floor area under management growth and the acquisition strategy. Positive earnings releases and execution of M&A will be key to positive share price re-rating for these companies."

The IPOs pave the way for the property management units to raise funds separately to make acquisitions that could boost their market share. The listings also open a path to invest in new properties not promoted by their parent, boosting the stock available to them.

China's property management market includes 25 billion sq. meters of gross floor area and is expected to hit 31 billion sq. meters by 2024, according to China Index Academy, the nation's largest independent real estate research firm. Analysts predict consolidation in the industry, which has 130,000 participants. These management units need to break free from the clutches of their indebted parent in order to grow.

The parent companies will continue to own majority stakes in the property managers, letting them partake in the growth, analysts said.

"The industry is still very much in rapid growth phase -- considerably higher than asset-heavy property developers," said David Blennerhassett, an analyst at Quiddity Advisors who publishes on the SmartKarma platform. "Property management services are countercyclical in nature and operate under an asset-light model, have a tendency to be more defensive and are less subject to policy risk than for property developers."