PALO ALTO, U.S./HONG KONG -- When Susan Yu received a call from Danke in February, she was baffled.

Danke Apartment, which manages more than 350,000 housing units in China including Yu's home in Xi'an, told her she needed to vacate the apartment as soon as possible because the landlord did not want to rent the place anymore, according to Yu who signed a one year lease with Danke that is supposed to end in October 2020.

Most major metropolitan areas in China were still under lockdown in February due to the coronavirus outbreak, and residential complexes have set up access control points to bar entry of all non-residents. According to Yu, this means it is nearly impossible to find a moving company or a new apartment.

"What if I caught the virus during the move? Is Danke going to be responsible for that?" Yu wrote in a blog post.

The bigger problem for the nascent co-living industry is that Yu is not alone. Dozens of similar cases have been reported in the past two months at Chinese consumer complaint resolution platform BlackCat, a website and app for customers to file complaints, as well as offering mediation services between the customers and businesses.

Danke told Nikkei Asian Review that they are working on solving Yu and others' complaints by offering compensation packages such as moving fees and moving assistance with relocation to other units managed by the company.

The coronavirus outbreak has put co-living companies like Danke in an awkward position.

Co-living rental service providers do not own the units they rent out, but only manage the places after signing year-long contracts with property owners. The co-living companies furnish the properties, and tenants then lease individual rooms or the entire apartment from them, without dealing with landlords. Co-living companies do not own properties but lease and manage the units after signing year-long contracts with the property owners. (Photo courtesy of DanKe)

Most of the time, the model works for all involved: It saves the landlords the hassle of filling the vacant rooms, while tenants do not need to worry about finding roommates or filing maintenance requests, as the property manager from the co-living company will take care everything from Wifi to utilities.

China's co-living market is projected to hit 3.2 trillion yuan ($459 billion) in transactions by 2025, according to a 2018 report by AskCI consulting, a market research institution headquartered in Beijing.

But the coronavirus outbreak has thrown a glitch into the co-living model, just as many companies were banking on growth and even overseas expansions.

After China locked down the country for almost two months, millions of Chinese who had gone back to their hometowns for the Lunar New Year holiday had to postpone their return to the cities where they work and rent rooms.

More than a few tenants are now unable to pay rent because they couldn't return to work and some are not getting paid on time or at all as businesses they work for are also struggling.

Some renters have cited the "act of God clause" in their leases, arguing that they should not have to pay the full rent since they did not stay in the apartment over the past months for reasons beyond their control, according to posts on Chinese social media platforms and news reports.

Meanwhile, co-living companies like Danke still need to pay the monthly fee to landlords, with or without the rent collected from tenants, which poses a significant challenge for their cash flow.

There are also concerns that co-living arrangements could accelerate the spread of the virus, leading some tenants and landlords to decide to end their contracts with the companies.

"The co-living rental industry has a big impact on people's livelihoods and has been severely hit by the epidemic," said Zongheng Fu, Danke's public relation manager.

Major co-living players in China -- including Danke, Ziroom, QingKe -- have rolled out subsidy policies for residents and are asking for property owners' support to waive some rents, in part to help themselves to survive the cash crunch.

Danke is trying to convince property owners to forego some amount of their rental payments during the epidemic period, saying the waived rent will be paid back by the company when the property contracts expire.

The "waive and return" method is to "alleviate the operational challenge during the difficult epidemic period," according to a company statement.

Danke said it has yet to assess the size of financial damage caused by the coronavirus outbreak, but added that it is not going to run out of cash anytime soon, thanks to its recent initial public offering at on the New York Stock Exchange in January.

Ziroom, another major co-living company in China, has reportedly received investment from SoftBank, while Qingke, which manages more than 100,000 co-living units in China, recently listed in the U.S.

Compared to their well-funded competitors, smaller co-living startups might not be as lucky to survive the coronavirus disruption.

Nicholas Holt, the head of research at the Beijing office of estate agency Knight Frank, told the Nikkei that the tight cash flow caused by the coronavirus outbreak is "not necessarily a bad thing" as it has helped accelerate the industry consolidation.

"Whenever there is a shake in the market, there is a consolidation. Weak players will probably drop out," Holt said, adding that mergers and acquisitions are expected in the coming months.

"[The Chinese co-living market] might take a hit from the coronavirus because the idea of living with other people is not at the top of the agenda right now. ... But in the long-term, I'm still positive about its market prospect," Holt said, citing the shortage of affordable apartments in big cities as well as the sense of community among the key reasons for his optimism.

The future of the co-living could be even brighter once the industry overcomes the pandemic challenge, as overseas markets such as the U.S. catch up with China's co-living fever.

Since the financial crisis in 2008, more young adults in the U.S. continue to live with their parents than on their own due to high rent and housing supply shortages, according to a 2014 survey by Pew Research Center.

"Co-living is the solution to the housing crisis in areas like Silicon Valley. We are helping to bring more affordable long term housing to the market," said Andrew Collins, co-founder and CEO of Bungalow, a co-living startup based in San Francisco and manages properties in 11 cities in the U.S.

In November, Bungalow announced $47 million in new funding, bringing total funds to $68 million. Collins said the new funding will help them scale to more than 12,000 properties by the end of this year.

"Bungalow's explosive growth is evidence that renters desperately want an alternative to paying sky-high rents and to feel connected to a community, while homeowners are searching for new ways to utilize single-family homes built for a different era," said Matt Mazzeo, partner at Coatue Management, one of Bungalow's backers.

But not everyone is so convinced the model will work, especially after the failed public listing of co-working company WeWork last year.

"The business model of co-living is essentially no different from leasing properties and turning them into co-working spaces," said a venture investor based in San Francisco who specialized in the real estate sector.

"WeWork has yet to prove the co-working model works after almost ten years, and it is difficult for me to believe the co-living will work when they are facing even stronger competitive headwinds in the residential property market," said the venture investor.

However, the recent IPOs of Chinese co-living companies Danke and Qingke, along with Ziroom and many others' success in fundraising, could fuel investor interest in the co-living sector in the U.S.

"It is beneficial for the entire industry to now have those Chinese co-living companies listed in the U.S.," Collins said.

"We now have some public market comps, from which we can learn about their unit economics, growth rate, and the strategies that have been successful or not," he added.

Back in China, optimism for the long-term outlook remains.

Hong Kong-based Dash Living, a co-living space operator with about 1,000 units there and in Singapore, managed to maintain an occupancy rate of over 95% in the past months, despite recent headwinds including the anti-government protests in the semi-autonomous Chinese city and the coronavirus outbreak that has plagued the region. 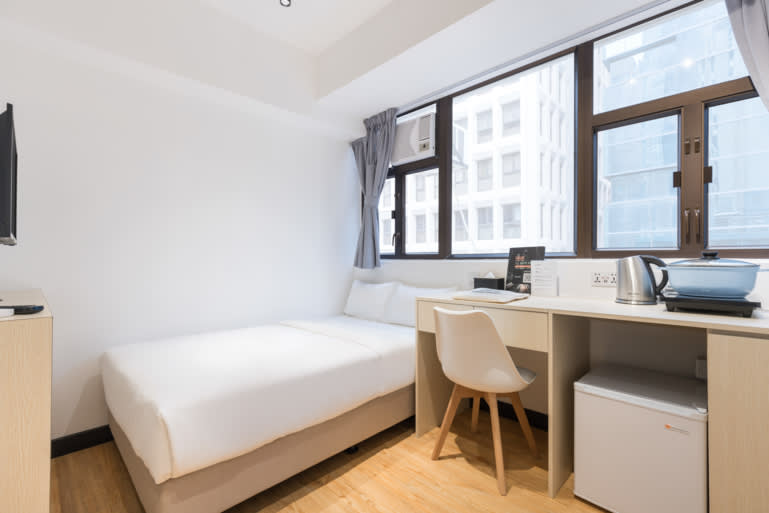 The company attributed the success to an early price cut last summer. "We were the first market mover to reduce price by 10-15%, contributing to a stable revenue in turbulent times," Aaron Lee, the founder of Dash Living told the Nikkei Asian Review. A room in downtown Hong Kong now costs as little as HK$10,000 ($1,280) per month, cheaper than most serviced apartments in the city.

Lee said the company has not experienced any cash flow issues thanks to its asset-light business model -- like its peers, Dash Living does not own the premises it runs, instead, the company pays a monthly fee to landlords and third-party partners such as gym rooms.

After raising $10 million in a pre-series A funding round last year, Dash Living is actively looking for new investors to further expand its business. Lee said they are planning to launch in a new city in Asia later this year.

"Unlike hotels, living space is a necessity," said Lee. "We are definitely optimistic in the long-run."