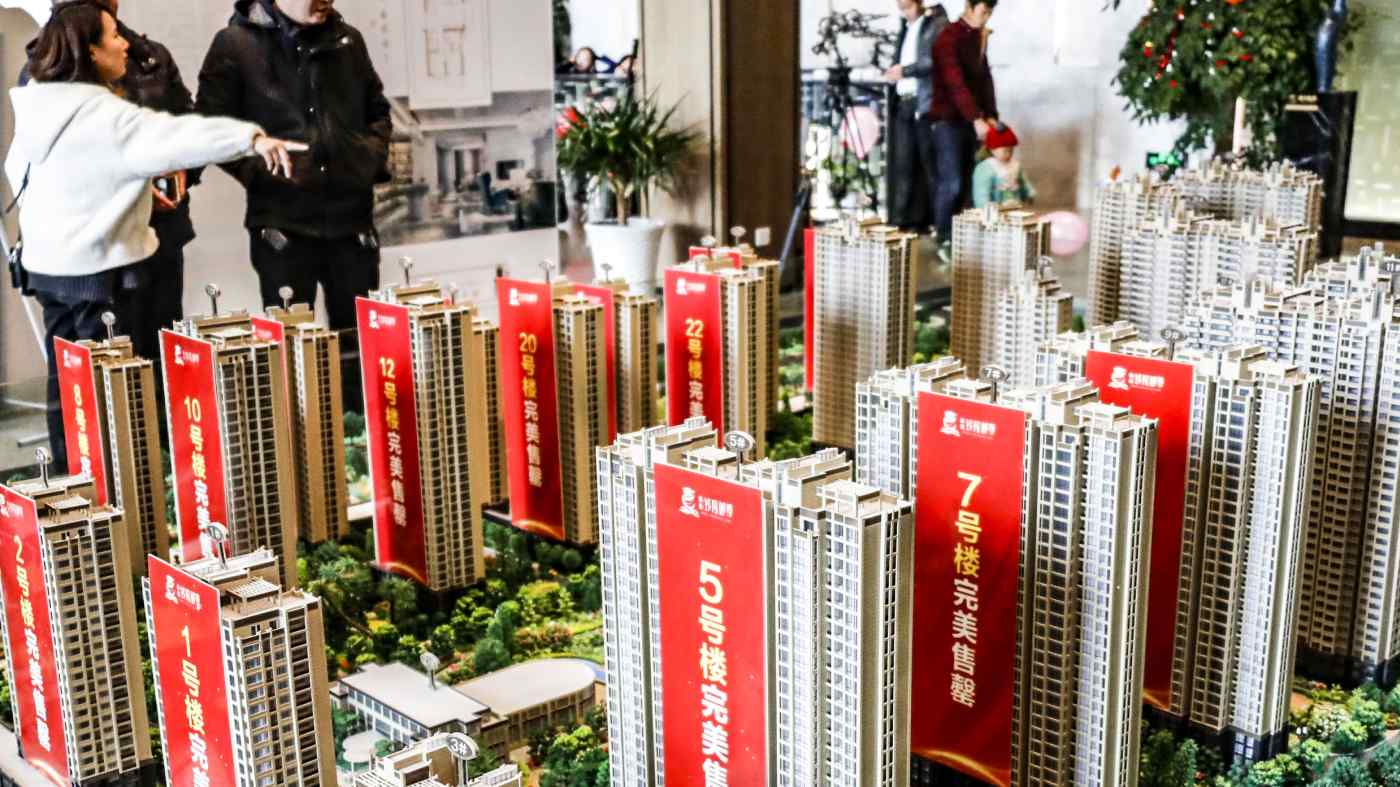 Chinese homebuyers look at housing models of a residential property project at a real estate in China in 2018. Condominium prices in the southern city of Shenzhen are now 57 times the average annual income, and 55 times that of income in Beijing.   © AP
IORI KAWATE, Nikkei staff writerSeptember 27, 2021 12:03 JST | China
CopyCopied

BEIJING -- The debt crisis at China Evergrande Group, the world's most indebted property developer, has cast new light on the health of China's real estate market.

With homes clearly beyond the reach of average households, investors fear Chinese President Xi Jinping could take measures to cool the bubble, especially as his new "common prosperity" campaign envisions a more equitable economy in which the fruits of development are more widely shared.

But such moves, as happened in Japan, present the risk of puncturing the bubble and triggering a downward spiral, making a "soft landing" imperative. Yet that may be easier said than done. A mishandling of the situation could push the Chinese economy into an economic downturn.

In the summer of 2020, the People's Bank of China laid out three "red lines" that major real estate developers needed to heed in terms of their financial status. By forcing real estate companies to stay within a certain debt-to-asset ratio, the central bank sought to make it difficult for these developers to increase leverage and to pour money into an already heated real estate market.

Last month, the Xi administration launched a political campaign themed on "common prosperity" and aimed at tackling China's inequality. A major element of the inequality is the money the wealthy make through real estate speculation. As investors began to brace for a tightening of the market, that precipitated downward pressure on real estate prices.

Investors saw Evergrande's enormous mountain of debt as perhaps insurmountable, which led to a wider market sell-off in both the American and Japanese stock markets in September.

Evergrande is now rushing to sell off assets and businesses. But even if an immediate collapse were avoided, the cloud hovering over the Chinese real estate market looks poised to linger.

One concern is that signals similar to those seen before the bubble burst in Japan in the early 1990s are visible in China today.

According to the Bank for International Settlements, credit to China's nonfinancial sector saw double-digit growth over the past five years and currently exceeds $35 trillion.

In addition, the ratio of outstanding private debt compared to gross domestic product is now 220% in China, surpassing Japan's 218% at the height of its bubble.

Real estate accounts for just under 30% of all outstanding loans in China, a figure that is higher than the 21-22% in Japan back then.

But unlike in Japan, where the stock market rose in tandem with the real estate market, China's bubble is focused within the real estate sector. In the decade leading up to the end of 1989, when the Nikkei Average reached its highest-ever mark, stock prices rose nearly sixfold.

In China, the SSE Composite Index has only increased by a factor of 1.5 compared to 10 years ago.

Once real estate prices begin to tumble and the myth that no matter how high prices go there will always be buyers willing to pay more is shattered, both wealthy individuals who bought houses with borrowed money and real estate companies with excess inventory are expected to quickly sell off their assets.

New housing starts in China fell 1.7% in the Jan.-Aug. period compared to the year before. Goldman Sachs has estimated that a 30% decline in new starts in 2022 will push down real GDP by 4.1%.

The Japanese government chose to dispose of banks' bad debt over a long time frame, but with such debt continuing to accumulate, banks began to refuse to lend or to withdraw loan credit, thus contracting the economy.

At a Politburo meeting in July, the Chinese Communist Party put in writing "stability of real estate prices" as one of its economic policy goals. The government will not hesitate to intervene in the market to prevent a sudden downturn. However, an adjustment in the real estate market, as Japan experienced, could drag China's economy into a long dark tunnel, weighed down by the burden of banks' bad loans.