An uninhabited Okinawan island up for sale: A Tokyo broker reports an uptick in sales of such properties.
KAORU YAMADA and HISASHI TSUTSUI, Nikkei staff writersJanuary 3, 2021 10:44 JST | Japan
CopyCopied

TOKYO -- Social distancing has become the norm during the coronavirus pandemic, but one Tokyo entrepreneur took the idea a step further than most.

Yoshihisa Midorikawa needed just one visit to decide to buy a small, uninhabited island off the shore of Japan's Ise-Shima, the site of the 2016 Group of Seven summit.

"I wanted my own 'country' where I wouldn't have to worry about becoming infected" with the coronavirus, Midorikawa said, explaining how he began the search for a secluded place to bring his friends.

He is not alone. Inquiries about buying deserted islands -- which rarely change hands -- are on the rise, according to Tokyo real estate broker Blue Ocean Point. Four have been sold so far during the pandemic, three of them to individuals, said Masanobu Sato, an executive at the company.

Located about 300 km southwest of Tokyo, the roughly 500 sq. meter island that Midorikawa bought looks like a craggy rock from offshore. But in the center lies about 300 sq. meters of flat space.

"There's this beautiful ocean, too, and I was just blown away by the views," Midorikawa said of the experience of touring the island with its owner in October.

Such isolated getaway properties typically cost millions of dollars, putting them out of reach of most buyers. For those priced out, Japan holds plenty of another option: mountainside forestland, which can be had tens of thousands of dollars. 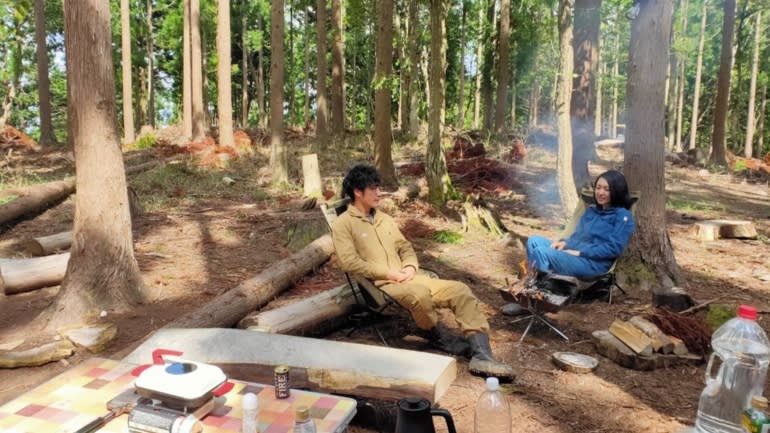 Japan has no shortage of mountains, and they are attracting more attention from private real estate buyers during the pandemic.

September alone saw 960 inquiries for such land at Sanrin Bank, a broker in mountainous Wakayama Prefecture, south of Osaka, according to representative Masaki Tatsumi.

Tokyo salaryman Koji Kiyokawa is one real estate buyer heading to the hills. In July, Kiyokawa purchased about 100,000 sq. meters of forestland in Ibaraki Prefecture, northeast of Tokyo, after doing some internet research at home -- where he had found himself increasing cooped up.

He had been interested in living closer to nature before, but the pandemic convinced him to go all in. "I knew going into this that it wouldn't be easy," he said. Kiyokawa plans to furnish a campground for himself, something he described as "building our very own base."

The added difficulty of developing and maintaining such real estate is enough to deter many buyers. Environmental regulations make it difficult to build on some islands. Water, electricity and other infrastructure may be lacking.

Buyers of mountainside land face the risk of legal liability for landslide damage in the event of heavy rains, the kind of disaster that has struck Japan repeatedly in recent years.