Interest in leaving Hong Kong is the highest since the lead-up to the former British colony's 1997 return to China, said Andrew Lo, a local emigration consultant who has worked in the industry for over three decades.

"This is the biggest emigration boom in Hong Kong's history," he said. "People from different levels of the society, aged from 18 to 80, are all talking about emigration."

Lo, the managing director of Anlex Services, said many panicked Hong Kongers have been finding ways to "flee from the city" in the past year and a half.

The exodus began with Hong Kong's pro-democracy protests in the latter half of 2019. More people were spurred to seek emigration support, and the trend solidified after China imposed a national security law on Hong Kong in 2020. With the city unveiling education guidelines in February that include teaching "national security" to schoolchildren, parents of young kids are particularly eager to leave.

Midland Realty, a leading property agency group in Hong Kong, offers legal support for visa applicants through group member Midland Immigration Consultancy. Tina Cheng, its senior director of business strategy, said half of its customers are thinking of going to the U.K.

"Many of our customers are family based," she said. "Parents are planning to bring their young children to the U.K. There is an increase in the inquiries for buying U.K. properties."

Interest in purchasing overseas properties surged 50% to 100% over the past two years, according to Midland.

Real estate investment has been a popular way among Hong Kongers to attain residency elsewhere. But the recent political developments prompted the U.K. and Canada to expand immigration programs for Hong Kongers, opened the floodgates for emigration from Hong Kong.

About 310,000 British National Overseas passports -- eligible to people in Hong Kong born before the handover to China -- were issued in 2020, doubling from the previous year.

BNO passport holders are now eligible to apply for a new visa scheme, which lets them stay in the country to work and study for up to five years, and to apply for U.K. citizenship after six years. Some 27,000 Hong Kongers have applied for the program since it was launched at the end of January, according to the U.K. government.

Besides Midland, other major local property agencies in Hong Kong -- such as Centaline Property and Ricacorp Properties -- are also expanding their immigration consulting services.

Many emigrants are holding onto their Hong Kong property, as they bet that real estate prices will rise, a Midland official said. Agencies focusing on the growing emigration business hope it will give them not only opportunities to broker transactions overseas but also chances to manage for-lease properties. 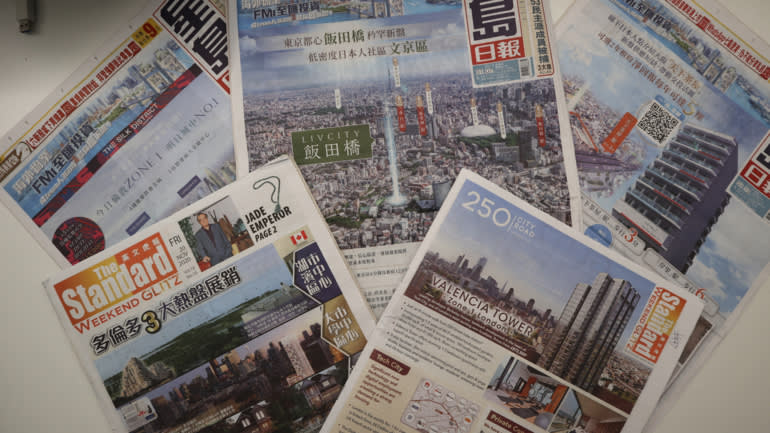 Ads for overseas real estate are featuring on the front pages of Hong Kong newspapers. (Photo by Takeshi Kihara)

Nations beyond the U.K. and Canada are gaining interest. Irish immigration consultancy Bartra Wealth Advisors opened a Hong Kong office in August 2019, during the height of the protests. The company believed that Hong Kongers' interest in Ireland, an English-speaking member of the European Union, would grow following Brexit.

Jay Cheung, Bartra's marketing director, said its immigrant investor programs attracted applications from 50 families by the end of 2020. "Hong Kongers have special sentiment with the U.K., as the city was once a U.K. colony," he said. "But Ireland was also a U.K. colony with many similarities in their education and the legal systems."

Japan is another destination for Hong Kongers. Chiyo Japan Estate, a specialist in Japanese property investment, reports fielding about 30 immigration-related inquiries monthly these days, up from just a few per month. The company helped multiple investors obtain business manager visas successfully by operating franchises of a cram school in Japan.

Ivone Mak, Chiyo's chief operating officer, said Hong Kongers love to visit Japan and cited that as one factor for them in migrating to the country.

"Many from Hong Kong find it easier to adjust to life in Japan than in a non-Asian country," she said. "Also, real estate in Japan provides reliable returns."

Other businesses have jumped on the emigration bandwagon. International courier comparison service Spaceship has shipped nearly 30,000 BNO documents for over 50,000 applications in the second half of 2020. It also debuted a relocation project to facilitate moving to another country.

"We believe [relocation] will be the big trend in the coming years," he said.

The exodus raises concerns about Hong Kong's economy. Bank of America sees an outflow of 280 billion Hong Kong dollars ($36.1 billion) with 150,000 people moving to the U.K. While Hong Kong's currency is expected to remain pegged to the U.S. greenback, fears of a capital drain persist.

A population decline due to emigration and a decrease in arrivals from the mainland will hurt the housing market, Bloomberg Intelligence analyst Patrick Wong warns. Price indexes show that the rental market is declining faster than properties for sale, suggesting a glut in properties for lease.

If 1% of homeowners in Hong Kong move out, the vacancy rates would rise to 5.3% by year-end from around 4% at present, Wong predicts. Housing for the middle class is likely to be hit hard, he said.

"If the population outflow occurs, medium-sized home units' vacancy rate could increase further," Wong said. "It is partly because some households with children are keen to move to the U.K."