HONG KONG -- Hotel owners in Hong Kong are tempted to redevelop their properties into office towers as prices in prime business districts continue to soar amid strong demand from mainland companies.

Luxury office buildings in the city have become so valuable in the past year that William Cheng Kai-man is preparing to convert his six Hong Kong hotels to office towers, despite a steady recovery of the tourism sector here.

"I am in the process of applying for approvals for all my hotel properties," Cheng, chairman of Hong Kong-listed Magnificent Hotel Investments, told the Nikkei Asian Review. He expects that the revamp may double the properties' value. Cheng's confidence stems from recent high-profile office tower transactions, most remarkably the sale of billionaire Li Ka-shing's The Center in November. The 73-story tower in the heart of the city's Central financial district sold for a record $5.2 billion to a consortium led by a Beijing-based company -- a price that translates to HK$32,900 per square foot. Some of Cheng's hotels are not far away the skyscraper.

Like Cheng, many hotel owners in Hong Kong also want a slice of the lucrative office market.

The drive for bigger profits appears set to change the fate of The Excelsior in Causeway Bay, a four-star hotel owned by Mandarin Oriental Hotel Group. The onetime largest hotel in Hong Kong obtained approval for conversion to a 26-story commercial building and went up for sale last year.

Though the deal fell apart as the bids failed to meet management's expectation, Hong Kong still could see the landmark building -- located at the very first plot of land sold to the British when the city became a colony in 1841 -- demolished.

"The group is still reviewing all strategic options available in respect of the property (The Excelsior)," a spokesman at Mandarin Oriental said in an email to The Nikkei. "These include the redevelopment of the site for a commercial building." The Excelsior, a four-star hotel owned by Mandarin Oriental Hotel Group located in a bustling commercial district of Causeway Bay, may end up being demolished. (Photo by Nikki Sun)

While locals are sad to lose a piece of the city's history, industry insiders view the plan as far from a surprise.

The 45-year-old hotel overseeing Victoria Harbor could bring HK$27 billion if it were turned into a commercial building.

"This translates to more than HK$30 million per room, a valuation that even top-grade hotels in Hong Kong are unable to fetch," Yau wrote in a report.

The tight supply also boosts prices, as the vacancy rate of luxury office towers last year was below 2% in Central and under 3% in Wan Chai and Causeway Bay, Jones Lang LaSalle said.

"The major incentives for the owner to convert hotel into office is minimization of capital expenditure and increment of income," said Tom Ko, executive director at real estate consultancy Cushman & Wakefield.

Landlords would have to invest regularly in renovating hotel rooms to stay competitive, he said, while profits are not guaranteed.

In the past three years, the local hotel industry faced pressure from dwindling mainland visitors, which made up three-quarters of the city's total. Average hotel rates in Hong Kong declined in 2015 and 2016, and occupancy fell below 90%, government statistics show. 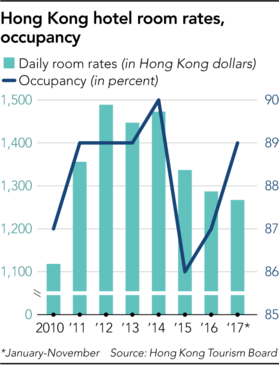 The sector only began to see a moderate recovery last year, with visitor numbers up 3.2% from 2016. But that positive sign is not stopping hotel owners from chasing even bigger returns.

In July, Rhombus Group closed Hotel LKF in Central after operating it for 11 years. The 95-room hotel in LKF Tower is being converted into 85,000 square feet of office space.

The owner of Crowne Plaza, a five-star hotel in Causeway Bay, also has submitted an application to clear that site for a 22-story office tower.

In addition to conversion plans for his own hotels, Magnificent's Cheng last year also purchased Newton Inn, a midrange hotel in North Point, for HK$1 billion from Henderson Land Development. He is applying to redevelop the site into an office tower.

But greater profits come with higher risks. Cheng said he will wait at least a year to have a clearer picture of the market trend before starting to redevelop the buildings. Construction work typically would take three years, and the market may change by then, the experienced real estate developer said.

"I hope the office market could keep up the momentum," Cheng added.