TOKYO -- Real estate transactions in Japan are on track to fall for the first time in three years, as overseas buyers shy away from a property market that is showing signs of overheating.

Property deals totaled 3.26 trillion yen ($29.3 billion) from April 2018 to last month, down more than 30% from a year earlier, according to the Urban Research Institute, a Mizuho Trust & Banking group company.

Monthly figures have been sinking on the year since December, making a decline for the year ending March 31 all but certain.

The drop has been particularly steep in deals by foreign buyers. Overseas investors sold 477.6 billion yen and bought 297.9 billion yen of Japanese property between April and February, down from over 1 trillion yen each in the same period last fiscal year.

Many companies had been unloading properties as part of streamlining efforts. But this trend has played out, slowing the flow of new listings on the market. 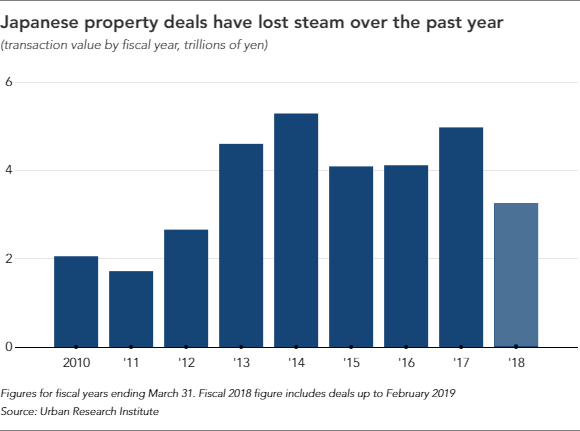 Meanwhile, demand from real estate investment trusts and other Japanese remains strong, particularly in office space. The combination of the two factors has kept prices high. Bank of Japan officials have expressed concern about the high level of lending for real estate transactions.

One of the few notable deals this fiscal year was the 34.8 billion yen purchase of office tower Nishi Shinjuku Prime Square in Tokyo by Invesco Office J-REIT.

Such large-scale deals are becoming less common. Only 78 topped the 10 billion yen mark through February, 30% fewer than in the year-earlier period.