The country's gross domestic product expanded 7.4% in 2014, according to preliminary data announced Jan. 20. It was the slowest pace in 24 years, with experts citing a sharp decline in fixed-asset investment as a major factor. There have, in fact, been glimmers of a pickup in the housing market, but a domestic developer's inability to pay its debt has raised new concerns about the outlook. 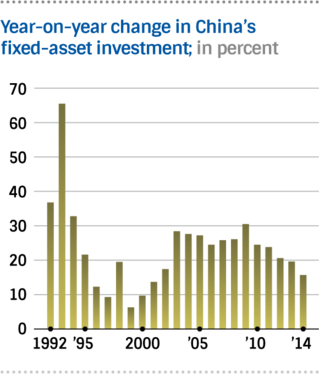 Kaisa Group Holdings, a real estate developer based in Shenzhen, Guangdong Province, effectively defaulted on offshore debt earlier this month. The government of Shenzhen had blocked some Kaisa projects -- the reasons are unclear -- and the company was unable to make a coupon payment on its $500 million worth of dollar-denominated bonds. Kaisa is the first Chinese real estate company to have its dollar-denominated debt turn sour.

In Suzhou, Jiangsu Province -- not far from Shanghai -- a sales office for Kaisa condominiums was dark and empty. A notice posted at the entrance only explained that the electricity supply was interrupted because of delinquent payment.

According to David Chin at Swiss bank UBS, Kaisa issued non-investment grade corporate bonds. He said defaults on junk bonds are not unusual and that the matter is unlikely to hurt the country's bond market.

Prices of new homes in 70 major Chinese cities were down 0.4% on average in December, firming up for the fourth straight month, according to data released by the National Bureau of Statistics of China. However, there is concern that Kaisa's troubles could slow the momentum toward a housing recovery.

Total Chinese investment in real estate development, which accounts for roughly 15% of the nation's GDP, rose 10.5% in 2014, a roughly 50% slowdown from the previous year. When all real estate-related businesses, such as cement companies, are included, the industry accounts for an even greater chunk of GDP.

China's property market is closely intertwined with the country's shadow banking system and other threats to financial stability. With Beijing's austerity drive sapping the vigor from consumer spending, it is not a stretch to say that China's growth in 2015 and beyond hinges on whether the local property market recovers.

Until recently, the Shanghai Composite Index was on a bull run on the back of expectations for further stimulus measures. But the index plunged 7.7% on Jan. 19 in reaction to a crackdown by the stock market watchdog on illegal margin trading deals. The rapid growth in margin trading had been fueling a market rally, but that growth appears to be peaking.

The margin-trading balance, which had been ballooning, marked its biggest-ever decline on Jan. 19. As for the stock market, Zhou Xiaochuan, governor of the People's Bank of China, warned of an overheating at the recent World Economic Forum meeting in Davos, Switzerand. He said investors should focus on companies' fundamentals.