The Samyan Mitrtown shopping mall that opened in September is operated by one of the TCC Group's development arms.(Photo by Rie Ishii)
MASAYUKI YUDA, Nikkei staff writerOctober 10, 2019 16:35 JST | Thailand
CopyCopied

BANGKOK -- Asset World Corp. debuted on the Stock Exchange of Thailand on Oct.10, hitting a valuation of 188 billion baht ($6.2 billion) at one point.

The company is a property development arm of TCC Group, one of Thailand's largest conglomerates with a portfolio that includes Thai Beverage -- maker of the popular Chang beer -- and Singapore property and beverage group Fraser and Neave.

Leading the group is self-made billionaire Charoen Sirivadhanabhakdi, Thailand's fourth-richest man with a net worth of $16.2 billion, according to media estimates.

Asset World, whose holdings include luxury hotels Marriott Marquis in Bangkok and Banyan Tree in the resort town of Koh Samui, raised 41.7 billion baht from its initial public offering of 8 billion new shares, or 25% of the company.

According to its prospectus, the company will spend 25.5 billion baht by December 2020 to acquire a company that owns four hotels. The new funds will also go toward renovating and developing six other hotels and two mixed-use properties. The rest of the money will be used to pay down debt, or to invest in other developments and renovations.

Share prices in Asset World hovered around 6.05-6.1 baht in morning trading, up 1% to 2% from its IPO price of 6 baht and with a market capitalization of 188 billion baht, compared with peers Central Pattana at 284 billion baht and Minor International at 169 billion baht as of Oct. 9. Despite its success, TCC made its appearance in Thailand fairly late compared to other Thai conglomerates, such as Dhanin Chearavanont's Charoen Pokphand Group and Tos Chirathivat's Central Group, both of which have longer histories.

Charoen began business by selling ingredients to a state-owned whiskey distillery. When Thailand decided to privatize the whiskey business in 1985, Charoen successfully obtained its monopoly rights.

From then, alcohol became the core of the billionaire's business. Charoen founded ThaiBev in 1991, and its Chang beer became the country's bestseller by 1999, beating Singha beer in just four years after its debut. With the money made from beer, he was able to diversify into other businesses such as property and retail.

Charoen is Asset World's chairman and his wife, Wanna, is vice chairman. His second child, Wallapa Traisorat, is CEO and president.

"We put all good assets that can generate even more value into Asset World," said Wallapa on the sideline of the ceremony marking the first day of trading. "Asset World will spearhead the group's Thai property business, leading our organization into the future with a solid foundation." Asset World controls 92.4 billion baht of assets that also include top-tier shopping centers and office buildings. It made a profit of 352 million baht in the first half of 2019, up 14% from a year ago, although its revenue in the same period fell 10% to 5.8 billion baht.

TCC Group owns other property companies, including TCC Assets, TCC Land, Univentures and Golden Land. TCC Assets and Singapore's Frasers Property are working on what is said to be the largest private-sector property development in Thailand.

The 1.8-million-sq.-meter project is called One Bangkok, to which TCC has allocated 120 billion baht. Slated for completion in 2026, the project will comprise five office towers, five condominium buildings, one shopping center and one art museum. It will also house five hotels, one of them the first Ritz Carlton in Bangkok.

The listing of Asset World paves the way for the company to directly raise capital from the market for additional development. The massive One Bangkok project is also under the wing of TCC Group, and is believed to be the largest private-sector property development in Thailand. (Illustration courtesy of the developer)

But Thailand's tourism sector is facing headwinds. The Ministry of Tourism and Sports slashed its forecast for foreign arrivals in 2019 to between 39 million and 39.8 million visitors from an original estimate of 41.3 million. If accurate, the 2019 figure will notch an increase from 38.2 million in 2018, but it also shows that the global economic slowdown and strong baht are starting to bite.

"We need to rethink the marketing plan of the tourism sector, not by adopting a hasty approach, but by making it sustainable in the long term," Tourism Authority of Thailand Governor Yuthasak Supasorn said in July.

Consumption in Thailand is also weakening. The University of the Thai Chamber of Commerce recently reported that its consumer confidence index dropped for the seventh straight month to 72.2 in September, a four-year low.

This does not bode well for Asset World's profitability, which already faces short-term problems stemming from the U.S.-China trade war and long-term structural issues due to an aging population.

The group's beverage arm, on the other hand, looks set for growth overseas. ThaiBev, which is headed by President and CEO Thapana Sirivadhanabhakdi -- the third of Charoen's five children -- says the company plans to increase overseas revenue to 50% of its total by 2020.

ThaiBev began production in its first overseas Chang brewery in Myanmar on Sept. 25. It also acquired Vietnam's Saigon Beer-Alcohol-Beverage Corp., or Sabeco, for $4.8 billion in 2018. Domestically, revenue fell by 7% for the year ended Sept. 2018. 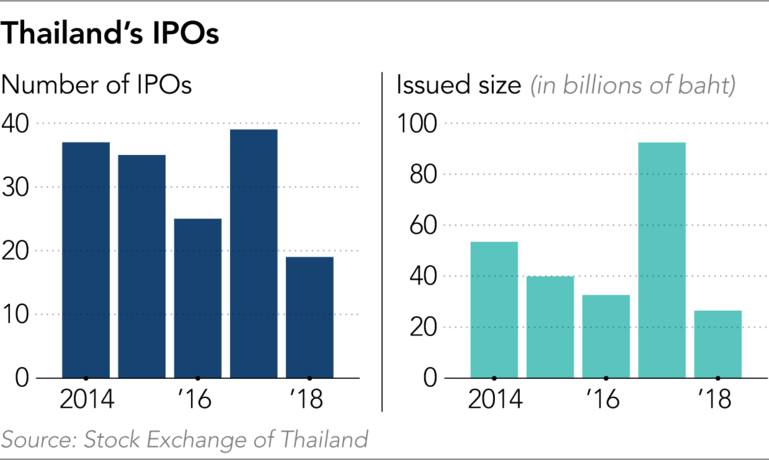 Asset World's IPO is the country's largest since the listing of the Digital Telecommunications Infrastructure fund, which fetched 58 billion baht in December 2013. It was the 17th stock to be listed on the Thai exchange this year.

Another large IPO is also due to hit the market. Central Retail, a department store chain owned by Central Group, has filed for a listing. It is expected to raise over a billion dollars, according to analysts.

A subsidiary of delisted Belle International, Topsports was the largest sportswear retailer in China by estimated total sales value in 2018 and commanded 15.9% of the market, according to its prospectus, citing market research company Frost & Sullivan. The company operates a nationwide retail network of more than 8,300 stores.