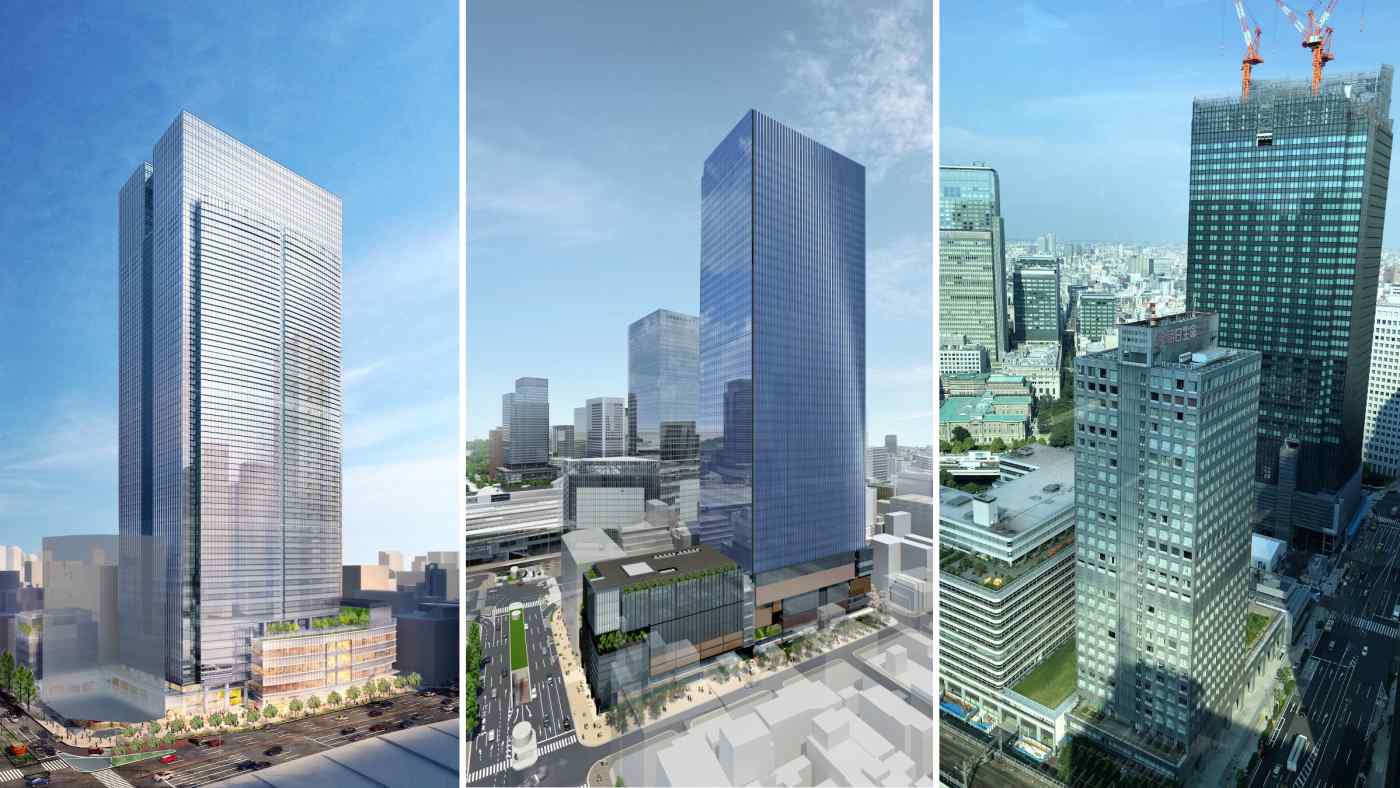 TOKYO -- Three building projects underway around Tokyo Station offer visions for how workplaces can adapt to life amid the coronavirus pandemic -- a critical question for developers as the rise in remote work raises questions about the future of the office.

A redevelopment project by Mitsui Fudosan in Yaesu, just east of the transit hub, is slated to open in 2022, becoming he company's first large-scale project completed since the start of the pandemic.

Digital technology was part of the plan from the outset, as a way of adding convenience. But with two years left until the scheduled opening, the design has been reworked based on ideas expressed by President Masanobu Komoda in a recent interview with Nikkei.

Komoda emphasized measures to control infection, including ventilation and contactless amenities. He disputed the argument that the shift to telecommuting would render conventional offices obsolete, predicting that some people will choose to return to their workplaces to improve their productivity, for example.

"The system will change so that people can choose to work in a way that enables them to succeed," he said.

The Yaesu building will contain offices and commercial facilities, along with Japan's first Bulgari hotel. The office area, spanning most of the 45 above-ground stories, will feature some of the largest office-exclusive floors in the Tokyo Station area, at 4,000 sq. meters per floor.

The key to designing office buildings for the coronavirus era is installing equipment to ensure visitors "can go from the entrance to the office floors without touching anything," said Shuhei Yamaguchi of Mitsui Fudosan's third office building development department.

Doors at the entrance and in common areas will open automatically using facial recognition technology, while other doors and elevators will feature contactless controls. Other surfaces that visitors are likely to touch will be treated with antimicrobial coatings, and ventilation systems will recirculate air at regular intervals.

The building will include shared offices as well as common areas such as lounges for tenants, to give workers more options and make tenants happier.

Tokyo Tatemono will build a 50-story skyscraper directly facing Mitsui Fudosan's building across Yaesu Avenue. The Yaesu Project, as the complex is called, will feature office space, a medical center, a multipurpose hall for theater and other events, and a bus terminal connecting to airports and outlying cities.

Construction is due to finish in fiscal 2025 and the location will serve as Tokyo Tatemono's headquarters. The building will maximize social distancing and contactless protocols. Temperature checks will be situated at office entrances and gates will open with facial recognition technology.

When entering the building, the destination floor will be automatically determined from the facial recognition data. The gate will display the elevator going to the person's floor, eliminating the need to push elevator buttons.

Mitsubishi Estate on Thursday released details of its redevelopment project in Tokyo's Tokiwabashi area. Construction on a 40-story mixed-use building will wrap up next June. The occupancy rate for office space has apparently reached about 80%

The company is also building the 63-story Torch Tower, which will be the tallest in Japan at 390 meters when completed in fiscal 2027.

Even before the coronavirus, Mitsubishi Estate had been looking to maximize convenience by developing apps for use by tenant company employees, according to a senior manager. Now the company plans to install contactless systems in which smartphones are used to tell elevators which floor to go to and to allow access to buildings and shared spaces.

In response to the pandemic, total outdoor space will be expanded to roughly 2 hectares from 1.2 hectares. There will also be a 2,500-sq.-meter rooftop garden.

The three developers are in a race to build coronavirus-proof buildings. Office vacancy rates in downtown Tokyo reflect the damage left by the disease and the economic malaise.

In August, the overall vacancy rate in Chiyoda, Chuo, Minato, Shinjuku and Shibuya crept up 0.3 point from July to 3.07%, according to major office broker Miki Shoji. The rate has climbed for six straight months, topping 3% for the first time in 30 months. A reading around 5% is considered a red flag.

But the trend toward remote work is not expected to eliminate demand for offices altogether.

"The vacancy rate is only around half of what it was following the Lehman shock" of 2008, said Hiroshi Okubo, head of Japan research at CBRE. Vacancy rates rose to around 8% to 9% in the immediate aftermath of Lehman Brothers' collapse.

Okubo says corporate demand for office space will remain strong, given the advantages of face-to-face interactions and the conveniences that come with a well-located office building.

There are also concerns about the productivity of remote workers. Roughly 50% of respondents to a May survey by the Nomura Research Institute said they were less productive working from home. While the company stressed that its findings were influenced by Japan's pandemic-induced state of emergency, many nonetheless appear concerned about the long-term viability of teleworking.

Of those who tried working from home but have since moved back to the office, 21% said they did not have the necessary information and communications infrastructure outside the office, according to a study by Persol Research and Consulting. Spaces equipped with cutting-edge digital technology could draw workers back to the office, regardless of their employers' official stance.

Digital updates are only expected to become more critical under the new normal. "We're receiving more inquiries from clients on how to avoid the 3 Cs [closed, crowded and close-contact settings] and how to alter the flow inside offices," said Toshinobu Kasai, Japan head at Jones Lang LaSalle.

Kasai expects more companies to adopt unassigned desks, for example, with sensors that track when they are in use to ensure social distancing. Air conditioning, a cause of many workplace conflicts, could also be controlled automatically using sensors, he said.

"Companies could assign more space to each employee to avoid the 3 Cs as they transition back into the office," said Hiroshi Nomura, president of Tokyo Tatemono. Both tenants and developers are working to design the perfect office for the pandemic era.