TOKYO/SHANGHAI -- A Chinese clearing and settlement services system aimed at internationalizing the yuan saw its use grow about 80% in value terms last year, a Nikkei survey finds, a rising challenge to the hegemony of the U.S. dollar.

Since the People's Bank of China began operating the Cross-border Interbank Payment System in October 2015, hundreds of banks in 89 countries and regions have participated. The system processed 26 trillion yuan ($3.77 trillion) of payments in 2018.

The settlement system is especially attracting the use of countries exposed to U.S. sanctions, such as Russia and Turkey, as well as African nations on the receiving side of China-led infrastructure projects under Beijing's Belt and Road Initiative.

Some 40% of these SWIFT transactions are settled in dollars, making the greenback the key currency of the global market.

China's CIPS has adopted English as the language for its services and has sped up its process, offering real-time transactions to promote yuan-based settlements. Consisting of a group of direct participant banks and a wider group of banks that take part indirectly through the direct participants, the structure is aimed at making it easy to transfer funds cross-border to accounts of Chinese companies.

Yuan-based account settlements have been quietly but steadily expanding, according to Nikkei's analysis of information released by the PBOC and CIPS. On top of the roughly 80% growth by value, the number of CIPS transactions increased 15% to 1.44 million in 2018. The presence of banks from countries subject to U.S. sanctions is especially noticeable. Credit Bank of Moscow joined CIPS in December, bringing the number of Russian participants to 23.

The ratio of the yuan used by Russian companies to pay for Chinese imports increased to 15% of total payments in 2017 from 9% in 2014. In addition, the Central Bank of Russia held 14% of foreign exchange reserves in the Chinese currency as of September 2018, up sharply from 1% a year earlier, while cutting the ratio of the U.S. dollar to 23% from 46%.

From Turkey, 11 banks are participants in CIPS.

No Iranian banks currently take part in CIPS. But the more the U.S. weaponizes the dollar by slapping restrictions on its use by banks, "the more likely it will be that they will seek alternatives" bypassing the currency, wrote Garry White of British investment management firm Charles Stanley in an April article. CIPS is serving as an alternative. Iranian banks' direct access to SWIFT was restricted in November 2018.

There also are many participants from African countries, where China is expanding its influence through infrastructure improvement projects and resource development. Thirty-one banks from the continent participate, such as South African and Kenyan banks, outnumbering North American participants.

But the yuan is still far from key-currency status. As of March, it accounted for just 1.89% of all account settlements going through SWIFT -- behind the U.S. dollar, the euro, the British pound and the Japanese yen.

Nevertheless, countries antagonistic to the U.S. are increasingly turning their backs on the dollar. With crude oil futures trading starting in Shanghai in March 2018, the market is starting to lure transactions away from New York and London. If Washington doubles down on its coercive foreign policy stance, the dollar's undisputed leadership may be threatened. 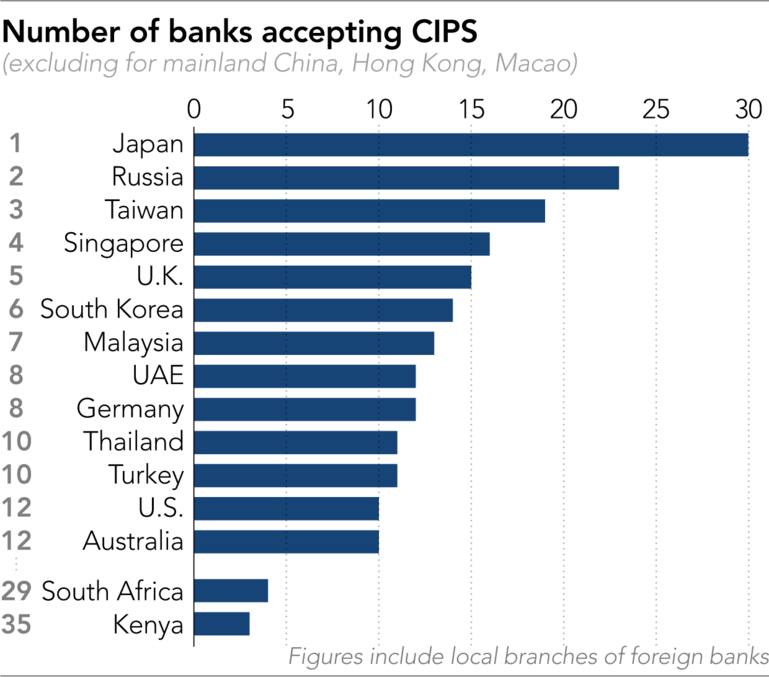 Takeshi Kihara in Hong Kong contributed to this report.