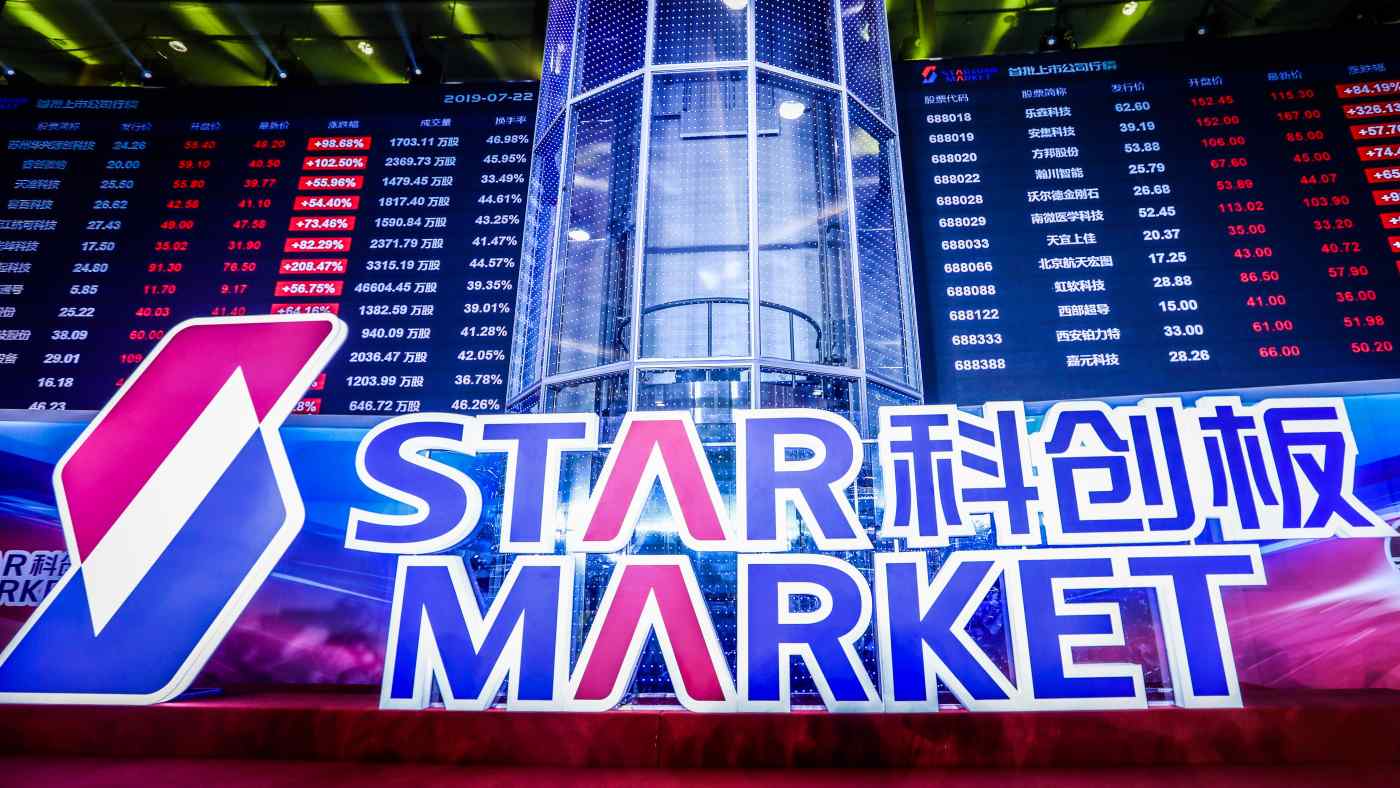 SHANGHAI -- China's new Science and Technology Innovation board finished its first week of trading on a high note, raising hopes for companies planning to list but also concerns over volatility for investors.

The initial batch of 25 stocks on the Shanghai Stock Exchange's Star Market ended on Friday an average of 139% higher than their initial public offering price, raising 519.7 billion yuan ($75.5 billion) in total market capitalization.

Leading the pack is Anji Microelectronics Technology Shanghai, which closed at 176.25 yuan, or 350% higher. On the first day of trading, the semiconductor maker finished 400% higher, following a frenzy of transactions that hit two circuit breakers and briefly paused trading of its shares.

The new board, intended as a test bed for easing strict trading regulations, allows companies to price their issues above the 23 times price-to-earnings ratio limit that applies to stocks on the main markets in China, including Shenzhen.

Such high valuations are in line with the companies' post-IPO share prices, a sign that removing the pricing limit was warranted, according to Gavekal, a financial services company in Hong Kong. "The problem is that investors have responded to the Star Market's IPO as if they were as much of a sure bet for rapid gains as main board listings valued [at] 23 times," said analyst Thomas Gatley. At least three companies are in the process of book building to join the new board by Aug. 5, when regulators plan to release the SSE Star Market 50 Component Index after the total number of IPOs reaches 30, according to the exchange's website.

One of the three is Amlogic, a Shanghai-based semiconductor maker for multimedia devices with an overseas presence that includes France, South Korea and the U.S. Amlogic and Shanghai Friendess Electronic Technology, a laser processing maker, are both scheduled to set their IPO price on Monday.

So far nearly 150 companies have applied to list on the board, including Shenzhen Transsion Holdings, a mobile phone maker focusing on emerging markets.

Transsion sold 124 million phones last year, putting it fourth in the global ranking, according to the company's prospectus. The company, which owns brands such as Techno, Itel and Infinix, accounted for nearly 50% of the market in Africa, ahead of South Korea's Samsung. Transsion said it hopes to raise at least 3.01 billion yuan to expand production capacity to meet rising demand for fourth-generation phones in Africa.

With the high valuation and liquidity witnessed during the first week, the Star Market is likely to attract more local companies and startups, according to Lynda Zhou, portfolio manager at investment firm Fidelity International. Though retail investors currently dominate, institutional investor participation will rise when the Star Market is included in the benchmark SSE Composite Index from Jan. 22 next year, Zhou added.

The high-tech focus of the board means, moreover, it is more suited for institutional investors, she said, as retail investors do not have any advantage when it comes to discerning the fair value of such companies.

Considering the strong performance of the first week, however, with stocks trading at elevated valuations, Zhou warned of instability in near term. "Although the Star Market serves as a strategic deployment for national financial reform, it will still experience rounds of market volatility and irrationality in the early stages."

Some analysts expressed greater concern, pointing to another secondary board -- Shenzhen's ChiNext market -- to argue that investor appetite is unlikely to hold up in either the short or the long term. "The initial exuberance cooled in just a little under a year and it went through three years of bear market to correct the valuation," Tianjun Wu, an economist at The Economist Intelligence Unit, said of the Shenzhen board.

If the stocks fall from their high valuation, retail investors will likely be the ones to suffer, as institutional investors would have already dumped most of their positions in the first week of trading, added Wu.

The fact that a significant number of the companies that have listed on the Star Market are controlled by state-owned institutions may not convince investors on the sidelines to join the fray.

John Woods, chief investment officer for Asia Pacific at Credit Suisse, noted that this may be a "challenge" for regulators hoping to project a liberalized image of the Star Market. He added, however, that he is "positive" on the new board, noting that it has managed to channel funds into the private sector.