Singapore lures in the rich with friendly rules and subsidies

SINGAPORE -- Singapore is becoming the playground of the super wealthy. With its low-tax regime and its free-market credentials, foreign funds and assets have been flowing into the country even during the pandemic. On their tail, their wealthy owners have also rocked up to the Monaco of the east, some fleeing the political instability in Hong Kong.

Here, the super wealthy are welcomed with open arms. Financial institutions have been stepping up efforts to expand private-banking services. The country's government has been working on introducing a new framework to facilitate the investment of funds.

Among those to have recently invested in the city is Zhang Hanzhi, the son of Zhang Yong and Shu Ping, the couple who opened the Haidilao hot pot restaurant chain in China. Zhang had acquired the right to buy a house in Gallop Road, one of Singapore's most expensive areas, close to the shopping district of Orchard Road and the old Botanic Gardens.

According to The Straits Times, the property, measuring about 2,000 sq. meters, is expected to be bought at 42 million Singapore dollars ($31 million). Zhang has already bought a property adjacent to this one for SG$27 million in 2016.

In February, Bloomberg reported that Google co-founder Sergey Brin set up a branch of his family office, which invests and manages his family's assets, in Singapore. Brin's assets are estimated at about $91 billion. The investments by these two individuals show the appeal of Singapore, where capital gains are not taxed and the maximum income tax rate is just 22%, far lower than in Europe and the U.S.

Singapore is also benefiting from a surge in Asian wealth. A survey conducted by France's Cap Gemini shows that there are 6.5 million individuals in Asia who are able to make investments of over $1 million in 2019. There are just 6.3 million such individuals in North America and 5.2 million in Europe. The Asian figure also represents about one-third of the global number of millionaires.

The COVID-19 pandemic has accelerated the inflow of foreign money. Total deposits of residents outside Singaopre at Singapore's financial institutions has increased 20% year-on-year since January 2020, reaching the highest-ever level of SG$64.2 billion in January this year.

Of note was an over 40% jump in year-on-year deposits in April and May 2020, just before a sweeping Hong Kong security law took effect, demonstrating the attraction of Singapore as a safe haven.

"Individuals in Hong Kong whose financial assets exceed $20 million had dispersed their assets in multiple overseas locations, including Singapore," said a private banker who has worked in Singapore for nearly two decades. "After uncertainty about Hong Kong's future spread, those with assets totaling from $5 million to $20 million also began to move their assets to Singapore."

According to a March 1 report released by U.K. real estate company Knight Frank, the number of Singapore residents whose total assets exceed $30 million reached 3,732 in 2020, increasing 10.2% from a year earlier.

Singapore has one of the highest number of ultrahigh net worth residents whose assets total over $1 billion, even though it is a small country with a population of just 5.7 million. 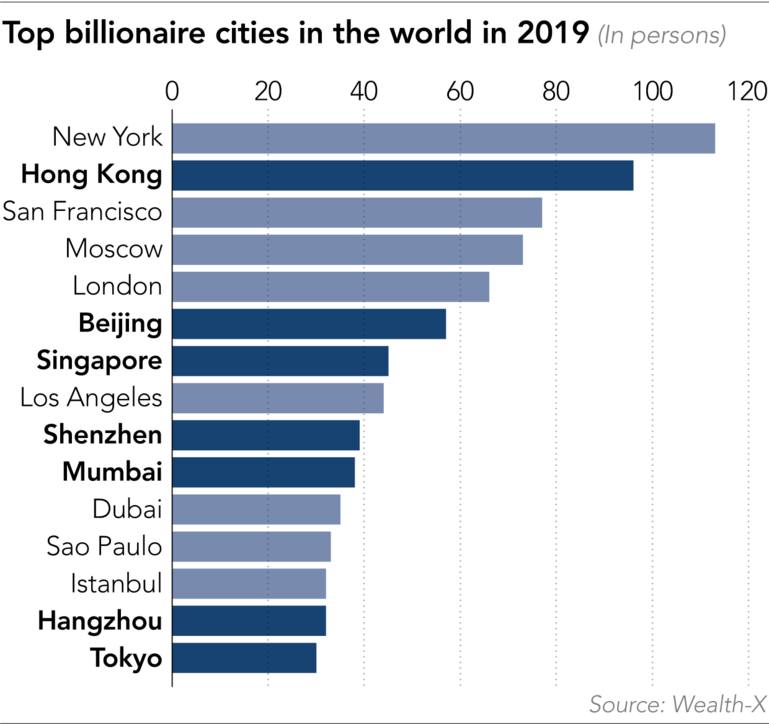 With such an inflow of wealthy people, financial institutions have been focusing their resources on private banking. In September, Nomura Holdings hired Ravi Raju, who headed private banking in Asia-Pacific at UBS. Raju, based in Singapore, is responsible for expanding assets under management as head of the international private banking operation.

Many high net worth individuals in Europe and the U.S. have inherited their wealth, unlike their Asian counterparts who tend to be entrepreneurs that have amassed vast fortunes in a single generation. These entrepreneurs, keen to expand their empires, have changed the way banks work.

Nomura transferred its private banking business in Asia excluding Japan to its wholesale division from its retail division, so that "we can offer specialized services designed for institutional investors, including currency hedging and leveraged loans, to wealthy individuals," said Yuji Hibino, senior managing director in charge of Asia wealth management.

If a customer is interested in buying a Japanese company, for example, Nomura's business division would work with the investment banking division to identify viable candidates and help them raise funds for the purchase. Japan's Nomura Holdings will position Singapore as its core location to beef up its private banking business in Asia.   © Reuters

Nomura's strategy is also to exploit Singapore's convenient location between East and South Asia. From Singapore, the company is targeting wealthy Indian expatriates and Middle Eastern accounts. Such a strategy is also commonly adopted by the private banking divisions of Singapore's local banks. In particular, successful efforts to solicit wealthy individuals in greater China is believed to have contributed to driving up the fee revenues of these banks, including Bank of Singapore, the private banking arm of OCBC Bank.

The Singaporean government in mid-January 2020 introduced the variable capital company framework, a new corporate structure for investment funds. That paves the way for the expansion of wealth management businesses, including hedge funds and property funds. As of mid-September 2020, just eight months after the introduction of the scheme, more than 120 VCCs have been incorporated.

To encourage wealth transfer from global tax havens such as the Cayman Islands and Mauritius, the Monetary Authority of Singapore is covering some of the cost of setting up VCCs until 2023. There are about 200 family offices in Singapore, with assets under management estimated at around $20 billion.