IPOs in the region raised a total of $7.1 billion, according to data compiled by Ernst & Young. IPOs numbered 115, down 7% from 2017. Small offerings dominated the list, with 56 of the 115 issuers raising less than $10 million.

Max Loh, Southeast Asia and Singapore IPO leader at EY, pointed out that uncertainty from the U.S.-China trade war and other factors dampened investor enthusiasm for new listings.

"2018 was relatively quiet in the Southeast Asia IPO markets, as economic uncertainty, trade tensions and emerging-market issues persist," Loh said. Southeast Asian nations have strong trade ties to China, so heightened Sino-American tensions have affected equities markets in the region, with some key stock indexes likely to end the year with their first drops since 2015.

But even as Southeast Asian listings lost steam, the region's fastest-growing economy of Vietnam increased its IPO market presence this year to overtake such regional leaders as Singapore and Thailand. The Ho Chi Minh Stock Exchange topped the region's exchanges in total IPO proceeds this year, at $2.6 billion, 3.7 times bigger than the figure for 2017. Vinhomes, an arm of property developer Vingroup, raised some $1.34 billion in its May listing, while Vietnam Technological and Commercial Joint Stock Bank, known as Techcombank, raised $923 million in April.

The Stock Exchange of Thailand followed the Ho Chi Minh bourse at $2.5 billion, down 28% from the previous year. Then came the Indonesia Stock Exchange at $1.2 billion, up 66%. Thailand and Singapore topped the list in 2017, with proceeds of more than $3 billion apiece. But this year, the Singapore Exchange's tally dropped 85% to some $500 million.

Yet Thai companies still led the fundraising list, with the Thailand Future Fund, an infrastructure investment vehicle launched by the government, ranking first at $1.37 billion, and beverage maker Osotspa coming in fourth at $465 million. 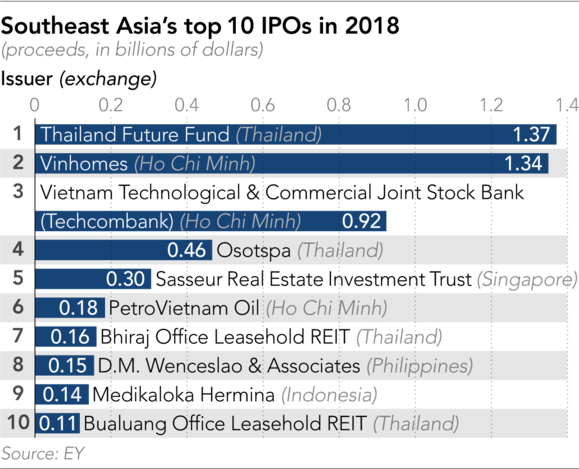 Southeast Asia's lackluster performance was in line with the global IPO market. Worldwide, IPOs fell 21% on the year to 1,359. Proceeds totaled $204.8 billion, up 6%, but this was thanks largely to such megadeals as SoftBank Group mobile unit SoftBank Corp. debuting on the Tokyo Stock Exchange and Tencent Holdings' streaming unit Tencent Music Entertainment Group joining the New York Stock Exchange.

Looking ahead to next year, potential IPOs of the region's unicorns are one focus. Despite weak IPO activity in the region this year, investors are increasingly looking to Southeast Asia's promising unlisted startups, such as ride-hailing company Grab and rival Go-Jek, boosting their valuations. Grab raised some $3 billion this year alone, including from global giants Toyota Motor and Microsoft, with its valuation exceeding $10 billion.

Southeast Asian exchanges have since changed their rules to attract more IPOs. The SGX has moved to allow listing of companies with the dual-class share structure preferred by startups. The Indonesian and Singaporean exchanges have shortened trade settlements to two days from three.

Yet investor sentiment still matters. In the latest quarterly survey by the Monetary Authority of Singapore, all 23 participating economists and analysts agreed that trade protectionism is a downside risk for the Singaporean economy. An expected further slowdown in China's economy and the recent stock sell-offs in developed markets could drag on investor confidence.

"With [the region's] exchanges innovating to build their IPO pipeline, and if geopolitical and economic volatility subsides, we may see more sustained IPO activity in the second half of 2019," EY's Loh said.

Yang of CMC Markets said that in the worst-case scenario, if the collapse of the U.S. equities market turns into worldwide panic selling in 2019 and eventually results in an economic downturn, then IPO activity will likely shrink -- "and investors will have a lot more things to worry about then."