TOKYO -- Corporate Japan has seen a rapid increase in unrealized gains on their shareholdings as the stock market has rallied, with big banks' paper profits reaching a 22-year high.

Paper profits on domestic shareholdings at the nation's five leading listed banks, including Mitsubishi UFJ Financial Group, totaled 9.35 trillion yen ($82.2 billion) at the end of September, growing by 700 billion yen in a year and hitting the highest level since September 1996, according to an estimate by Daiwa Securities chief analyst Akira Takai. 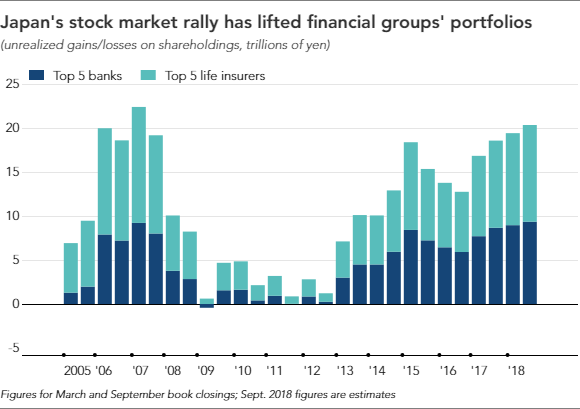 The market value of shares held by these companies rose in tandem with the stock market's upswing. The Topix index of all shares listed on the first section of the Tokyo Stock Exchange grew 6% during the period.

Tighter capital regulations following the 2008 global financial crisis have left banks scrambling to take necessary measures and struggling to expand risk assets. The rise in unrealized stock gains, which can be counted into capital, helps banks boost their capital ratios and is expected to encourage them to increase investments and loans.

Growing paper profits at banks present a "tailwind" when it comes to their efforts to unwind cross-shareholdings, according to Daiwa's Takai. The TSE revised Japan's corporate governance code in June, urging companies to disclose policies on reducing those shareholdings.

Many businesses want to have banks as stable shareholders and tend to oppose the lenders' moves to cut cross-shareholdings. But more companies are expected to become receptive to such selling, which will likely have only a negligible impact on their stock prices amid the ongoing market rally. For banks, unloading shares now means bigger profits.