China Merchants Securities IPO to raise up to $1.5bn as profits slow 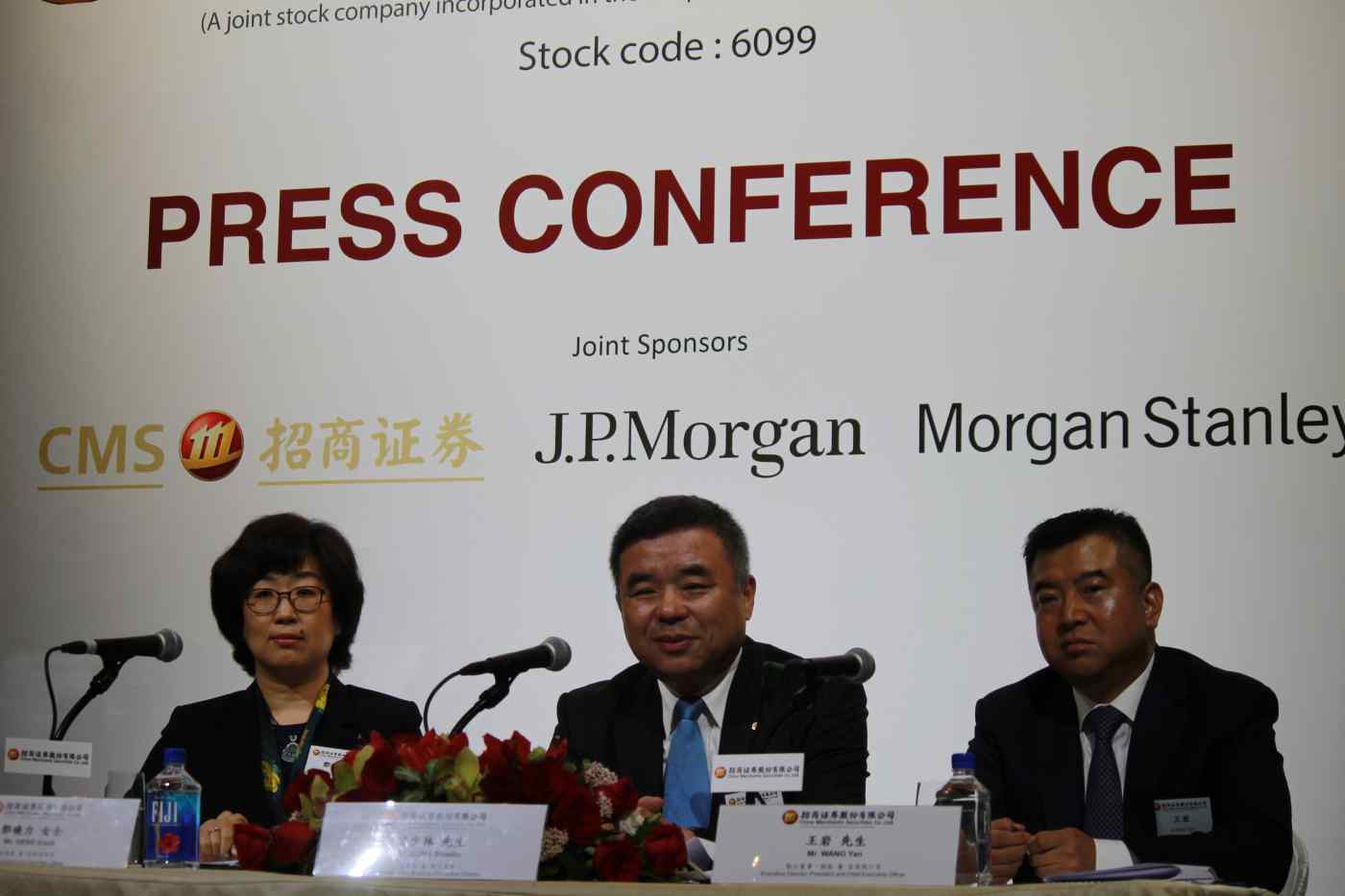 HONG KONG -- The investment banking arm of state-owned conglomerate China Merchants Group is looking to tap as much as $1.47 billion in a Hong Kong initial public offering as equity trading volume in mainland China has remained sluggish since the A-share market meltdown last year.

China Merchants Securities is issuing 891.27 million in new shares at an indicative range between 11.54 Hong Kong dollars and HK$12.78 per share on the Hong Kong stock exchange. The investment bank, which is also listed on the Shanghai Stock Exchange, will be raising between HK$10.29 billion ($1.33 billion) and HK$11.39 billion, assuming a greenshoe option is not exercised.

About 60% of the flotation Monday had already been allocated to 11 cornerstone investors, who generally agree to hold the stock for at least six months to secure a sizable portion of the deal. State-owned PICC Life Insurance was the largest subscriber, snapping up 37.4% of the offering, followed by Chow Tai Fook's investment vehicle under Hong Kong tycoon Cheng Yu-tung.

Others that have launched IPOs before China Merchants Securities -- including Postal Savings Bank of China, which logged the world's largest IPO last week -- have been forced to price their deals at the low end of their indicative ranges.

"We believe the Hong Kong market will trend up, especially after Britain's vote to leave the European Union, which has prompted more capital inflow into the city," Gong Shaolin, China Merchants Securities' board chairman, said at a briefing Monday.

But he admitted that the company, which reportedly aimed to raise $5 billion initially, had slashed its target because of market jitters. "The target size changes in accordance with different market conditions," Gong said.

The company's net profit plunged by 69.5% to 2.24 billion yuan ($340 million) from a year ago for the six months ended in June, as stocks and funds brokerage trading volume during the period tumbled 60.1% to 4.98 trillion yuan and net investment gains shrank by 91.8% to 386.6 million yuan, according to its IPO prospectus.

The dramatic decline was attributed to the company's need to carry out its political mission to prop up the slumping A-share market last year. Taking its cue from the China Securities Finance Corp., the company had pledged a total of 9.3 billion yuan to domestic blue-chip exchange-traded funds as of June 30.

China Merchants Securities also agreed not to reduce its A-share proprietary trading positions below its balance as of last July, standing at 50% of net capital, if the Shanghai Stock Exchange Composite Index dipped below 4,500 points. The index closed 1.76% lower at 2,980.43 on Monday.

"These stabilization measures expose us to additional market and other risks, and have adversely affected our business operations and results of operations since July 2015," the company said. "In particular, the pretax segment profit of our investment and trading business decreased from 2.84 billion yuan in the first half of 2015 to 136.5 million yuan in the same period in 2016."

The company warned that its financial performance this year might "deteriorate significantly" if the mainland stock market and investor sentiment fail to improve in the rest of the year.

China Merchants Securities, poised to become the third-largest IPO in Hong Kong this year, is set to be priced Friday after roadshows in Hong Kong, Singapore, London and New York. Its trading will start Oct. 7.

The deal was in line with the trend of financial services institutions dominating IPO activity in Hong Kong. This year they have accounted for over 80% of primary share sales, up from 49% last year, as the top five flotations there were all from the financial services industry, according to accounting firm Deloitte China.

"These firms are facing tougher capital requirements. They need more stable funds in their coffers to expand their businesses and go global," Edward Au, co-leader of the national public offering group at Deloitte China, said at a briefing Monday. "Mainland Chinese banks and securities companies will therefore continue to come and tap the Hong Kong market."

Au also noted that the massive queue for flotation onto the mainland market was a key factor pushing Chinese companies to list in Hong Kong. "Given the current pace, the current logjam of over 800 companies will take at least three years to clear. Such opportunity cost is high for a lot of companies," said Au, adding that firms cannot manage these delays as economic cycles are growing increasingly short.

Three to four jumbo IPOs, including a pharmaceutical group looking to raise $1 billion, will occur in Hong Kong during the fourth quarter, said the accounting firm, which noted that the strong pipeline backed by over 150 applications would enable the momentum to prevail.