Delegates at the 19th National Congress of the Communist Party of China on Oct. 18 in Beijing. (Photo by Akira Kodaka)
Stocks

HONG KONG -- The Chinese Communist Party's national congress, held every five years, opened in Beijing on Wednesday. The stock market is watching to see new economic policies that may be revealed at the congress. 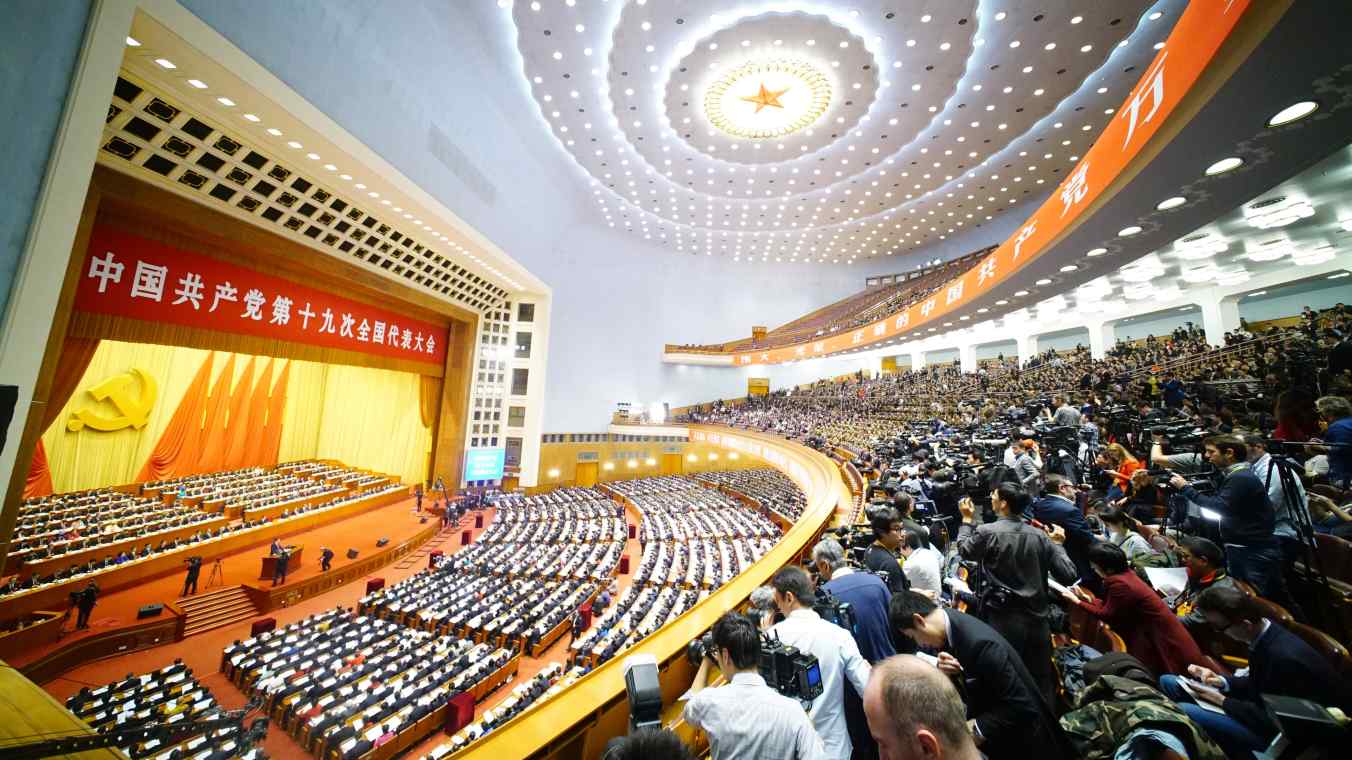 Since Xi Jinping, head of the Communist Party, will remain in power after the party congress, China's economic policy is not expected to change significantly. "The influence [of the congress] on stock prices will be small in the short term," said Patrick Shum, investment management director at Tengard Fund Management, an asset management company in Hong Kong. Actually, deleveraging and state-owned enterprise reform have been dealt with since Xi's first term in office.

A macroeconomic focus of attention is on whether deleveraging will continue after the party congress. China has somewhat tightened its monetary policy since the beginning of this year to curb investment and lending by shadow banking, which are blamed for its asset bubble. In the market, deleveraging was at first interpreted by some as a temporary measure ahead of the party congress, but the Xi leadership listed the control of financial system risk as the top priority task at the National Financial Work Conference in July. More people now expect deleveraging to continue after the congress. 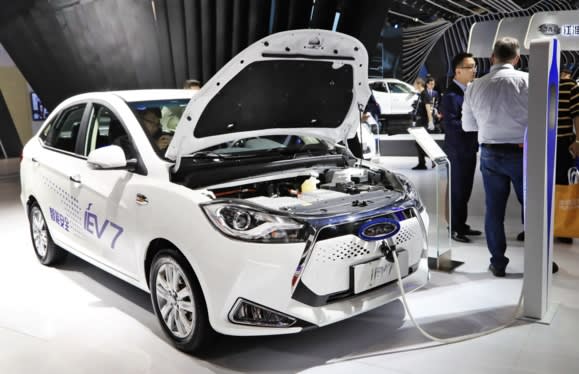 An electric vehicle is on display at the International Automobile Industry Exhibition in Shanghai in April. (Photo by Akira Kodaka)

In China, debts in nonfinancial sectors came to 236% as a percentage of gross domestic product in 2016, increasing nearly 60 percentage points over four years. Shen Jianguang, an economist at Mizuho Securities Asia, expects Xi will start painful reforms with his power strengthened through the congress. "Local governments and 'zombie' companies will face increased demands for cutting debts," he said. The stock prices of banks and securities brokerages that earn through lending may be negatively affected.

Meanwhile, the market looks to reforms of state-owned companies, expecting improvements in the structures of government-created organizations with low productivity. Whether the party congress will set off a new move is a focus of attention.

There are broadly two trends in the reform of state-owned companies. One is supply-side reforms to reduce excess production capacities. The materials and resources industries have led this trend. In 2016, Shanghai-based Baosteel Group and Wuhan Iron and Steel (Group), in Hubei Province, integrated to create China Baowu Steel Group.

The steel market has recovered with output reduction by facility disposal, and Baoshan Iron & Steel, a listed subsidiary of China Baowu, saw its net profit rise 65% on the year in the first six months of 2017. Maanshan Iron & Steel, which shifted its production emphasis to high value-added products, showed a 260% increase in net profit over the same period. Iron and steel stocks are regarded as favorite issues related to state-owned enterprise and supply-side reforms, and Maanshan Iron & Steel's stock price has risen 70% on the Hong Kong market this year.

There are expectations that the closures of small and weak companies and industry reorganizations will expand to other sectors, such as agriculture and cement. According to the Chinese media, seed producer Zhongnongfa Seed Industry Group and cement manufacturer Anhui Conch Cement have recently been rumored as stocks connected with state-owned enterprise reform.

Another trend is mixed-ownership reform, in which state-owned companies accept private capital. It is intended to reform rigid management by introducing private-sector wisdom. Mixed-ownership reform is already underway at China United Network Communications and China Eastern Airlines. It has also been reported that plans for such reform are being made in the shipbuilding industry, with China CSSC Holdings taking the lead. There is a rumor that CNOOC may implement a mixed-ownership reform. "Among China's three major state-owned oil companies, this is the only company where capital reform has not been in progress," said Alex Chow, a former analyst who is well-informed about state-owned enterprises.

Environmental measures can be both positive and negative factors for China's economy and stock prices. The negative aspect is large-scale factory closures for the protection of the environment. The smog in Beijing can no longer be left as it is. Hebei Province, which borders Beijing, has already started to limit steel and aluminum production to reduce air pollution and prevent waste from increasing. "I didn't expect that environmental regulation would become so drastic," said Shen of Mizuho Securities Asia. Some people are worried that negative effects on production may remain after the party congress.

Meanwhile, production cuts under environmental regulations have improved the market conditions for steel and nonferrous metals. Despite their negative effects on the whole economy, they helped improve earnings for the materials industry, along with supply-side reforms.

Another positive effect of environmental measures is that they have promoted widespread use of cleaner new energy vehicles. On Sept. 28, the Chinese government announced it would require automakers to attain certain production and sales percentages for NEVs, which include electric, plug-in hybrid and fuel cell vehicles, beginning in 2019. Companies related to lithium-ion batteries, which power electric vehicles, are popular not only in the Chinese market but in the Tokyo market as well.

In China, which has serious environmental problems, there are many listed companies that handle waste disposal and renewable energy power generation. If Xi mentions environmental protection at the party congress, shares in these companies may come to be actively traded.

However, in the past, relations between important Communist Party and State conferences and Chinese stock prices often followed a pattern in which prices rose ahead of the events due to expectations for policies and support by public funds, but fell later. Since the SSE Composite Index in Shanghai is now in the highest range in about one year and 10 months and Hong Kong's Hang Seng Index is at the highest level in about 10 years, there may be selling when investors see no new factors in the short term.