Don't let the rally fool you -- Japan Inc. has a lot of work to do

For faster growth, companies must embrace the innovation seen at the Facebooks and Amazons

TOKYO -- Share prices in Tokyo are at a 26-year high, and Akiyoshi Oba, chairman of the Japan Investment Advisers Association, is annoyed. It's not the rising prices themselves that has him irked but rather the excitement over something he feels should have happened long ago. "The problem is that it took 26 long years to recover to this level," he said, echoing the lament of many investors.

For Japan, the past two and a half decades are called "lost" for good reason. While the country struggled to recover from the collapse of its bubble economy and the deflation that followed, the rest of the world was racing ahead. Institutional investors say they will remain overweight on Japan stocks

Japan is firing its financial arrows at the wrong target

Since 1991, the MSCI North America Index has risen sixfold, while European and Asian indexes are more than fourfold higher. They have weathered the Asian currency crisis, the global financial crisis and the European debt crisis, and still posted growth.

Powerful innovation backed by strong corporate leadership has no doubt played a role in these rallies. Founded in 2004, Facebook's impact has been massive. It has changed people's lives and is now the world's fifth-largest company by market value. Japan has produced no such powerful startups. 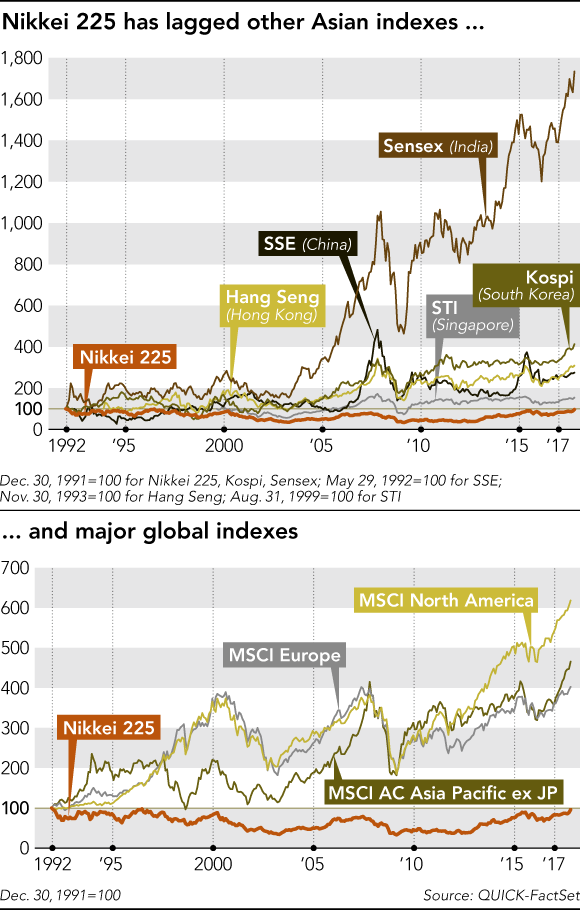 Japan does have many excellent and growing companies. But foreign rivals have far outpaced them, as market valuation data from QUICK-FactSet shows.

Leading Japanese businesses like Toyota Motor, Mitsubishi Electric and Sumitomo Mitsui Financial Group are all growing but at a slower pace than that of their global peers, raising fears that they will eventually become "invisible" to the rest of the world.

Even more worrying is that Japanese businesses may lag behind when it comes to the management philosophy of "coexistence with society," which has long been their advantage.

Social enterprises dedicated to making a positive impact on society are cropping up around the world. A U.S. nonprofit organization offers "B Corporation" certification to companies whose core business is based on making a contribution to society. More than 2,300 companies have obtained the certificate. Businesses aiming for sustainable growth, meanwhile, are embracing the concept of environment, social and governance, or ESG, criteria to evaluate their operations.

The turning point came with the global financial crisis. Public anger at the financial institutions whose focus on stock prices and short-term gains had destroyed the economy boiled over, bringing home to executives around the world the need to coexist with society.

But Japan Inc. has a chance to regain lost ground. Global stock rallies, after all, are not brought about just by a few innovative heavyweights like Facebook and Amazon. Corporate financial and management practices also play an instrumental role.

Globally, net share issuance has remained at zero since last year. In other words, companies are issuing shares, either for capital increases or initial public offerings, at the same pace that they are buying them back. Companies generally issue more shares and buy back fewer when the market is bullish -- but that is not happening this time. This unusual trend stems from shareholders pressuring companies to reduce their capital base to raise their return on equity rates.

ROE rates show how much a company rewards its shareholders, and its significance cannot be denied. But shareholders are not the only stakeholder. A company can hire more employees only when its business expands. This benefits society, and when society recognizes a company's growth as sustainable, its share price naturally rises, and shareholders' wealth rises along with it.

Japanese companies can prove that socially conscious management is the right path. To avoid falling into obscurity, the very least they must do is not let themselves be content with a 26-year high in stock prices.