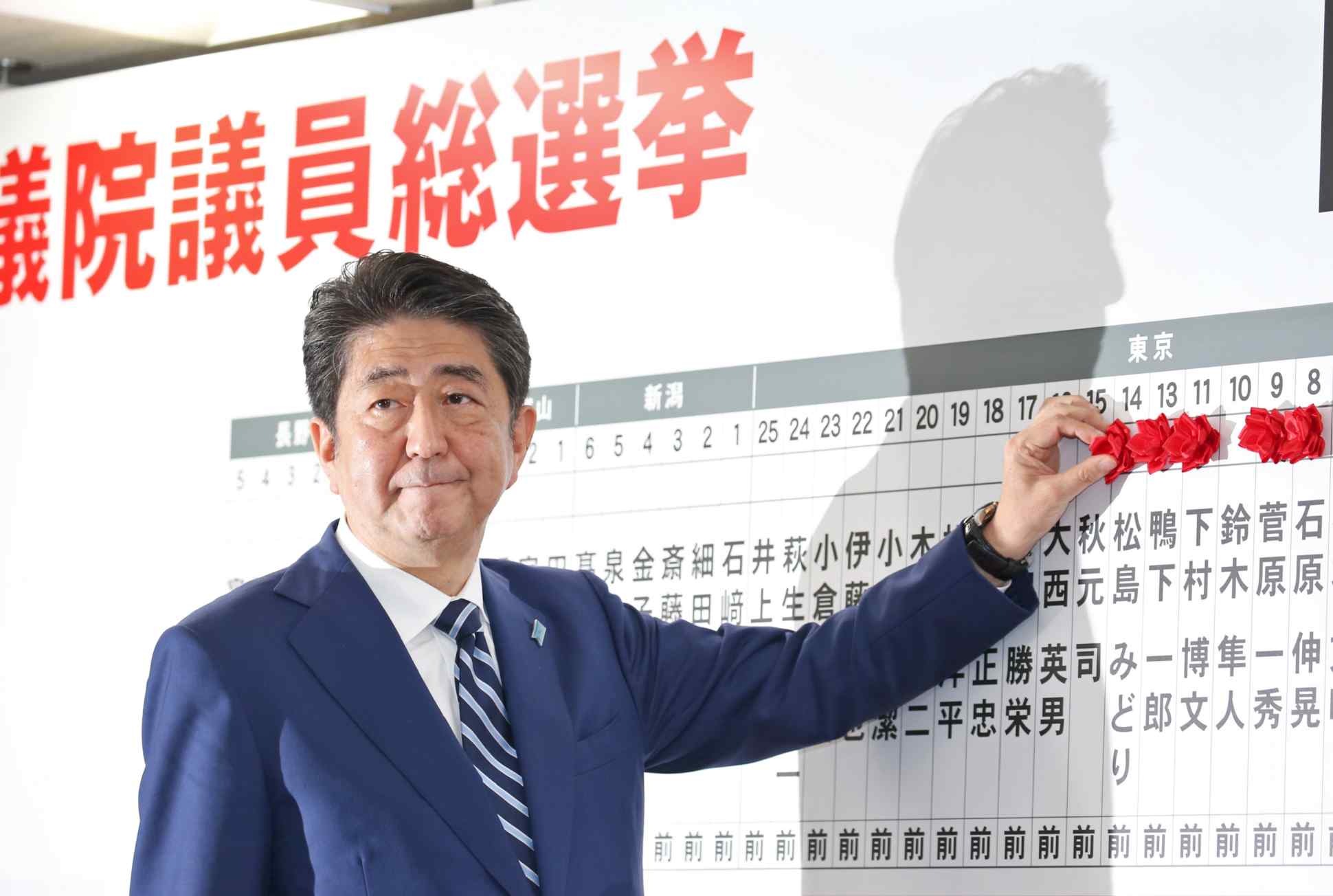 Foreigners piled into Japan stocks as Abe rose in polls

TOKYO -- As prospects for the status quo in Japanese politics brightened, overseas investors bought more of the country's stocks, lifting their net purchases over four weeks through Oct. 20 to 1.76 trillion yen ($15.4 billion).

A report released Thursday by the Tokyo Stock Exchange shows that foreign players purchased more than 445 billion yen worth of cash stocks on the first, second and startup sections of the Tokyo and Nagoya bourses in the final week of that period. This heavy buying fueled solid gains in Japanese equities over the days leading up to the Oct. 22 Diet lower house election.

Foreigners appeared increasingly eager to buy over the four weeks as prospects improved for the ruling coalition and Prime Minister Shinzo Abe's government. Net buying totaled only about 200 billion yen the week Abe dissolved the lower house late last month, amid apparent threats from Tokyo Gov. Yuriko Koike and her new Kibo no To, or Party of Hope. But the weekly balances of share purchases doubled to 400 billion yen or more thereafter as polls tilted toward Abe's Liberal Democratic Party.

The election results signaled that the government would remain stable for the long term, said Melissa Otto of Fidelity Investments' FIL Investments (Japan), and that investors could count on a continuation of Abenomics -- Abe's signature policies geared toward economic revitalization.

Some also praise the increased dividend payouts and stock buybacks by Japanese enterprises. Businesses in the country have made improvements in corporate governance, said Richard Kaye of French asset manager Comgest. Since 2015, Japan's listed companies have worked under a governance code directing them to focus more on capital efficiency.

The Bank of Japan's purchasing of exchange-traded funds also entered full swing under Abenomics. The central bank adopted the goal of purchasing 6 trillion yen in ETFs annually, and generally buys them when shares slide. This practice has diminished fear of falling share prices, making it easier for foreign investors to buy Japanese equities.

Japanese shares are hitting multi-decade highs, but this won't be a problem given growing corporate profits, said Andrew Sheets at Morgan Stanley of the U.S.

Some market players suggest foreign investors have the capacity to add another several trillion yen to their balance based on their past purchase records. Overseas investors have bought on balance about 15 trillion yen in Japanese stocks since the Abenomics rally began in November 2012, but the amount topped 20 trillion yen at one point in 2015.