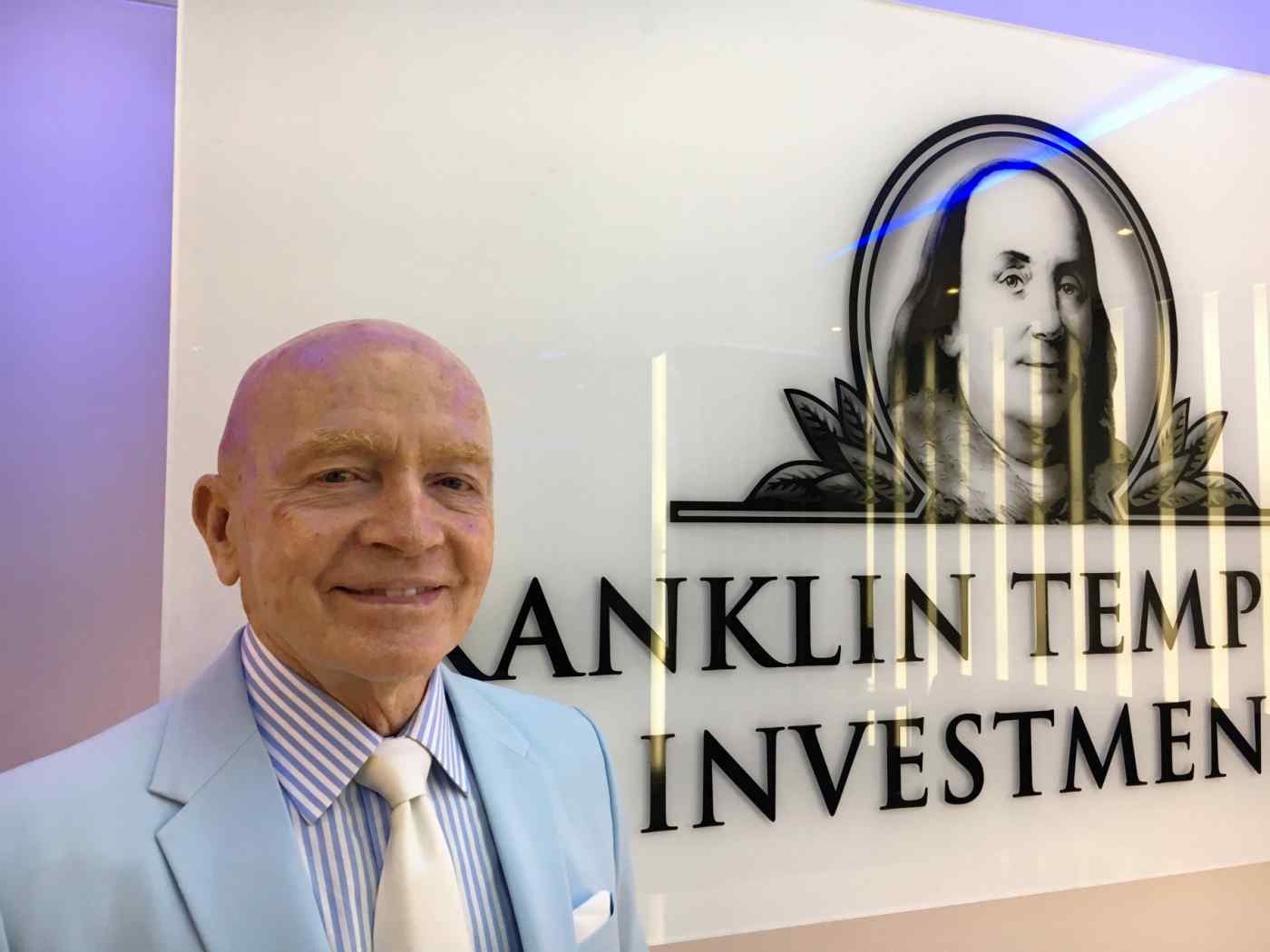 The dollar's rise in the wake of the U.S. presidential election triggered a massive outflow of capital from emerging market economies. Despite uncertainty in these markets, Mobius is unperturbed. This is mainly due to his bottom-up investing approach, which focuses on individual companies rather than countries. He carefully analyzes the quality of management in selecting his investments.

In 1987, he launched the world's first emerging markets fund, with an initial investment of just $100 million. Over the next 29 years, the fund's assets under management increased by a factor of 260. What is Mobius' investment philosophy, and what is the secret of his success?

Mobius was born in New York to a German father and Puerto Rican mother in 1936, when the U.S. was still struggling to recover from the Great Depression. Visitors to his childhood home came from many ethnic backgrounds. "The fact that my parents were immigrants ... opened my mind to an international view," he said.

Mobius was eager to take any job that paid well. The death of his father while he was still young forced Mobius to work in many part-time jobs, including as a restaurant pianist, to pay for his schooling. New York's ethnic diversity deepened his interest in foreign countries. He studied social psychology at Boston University, which in later years gave him insight into the herd mentality that is sometimes apparent in the stock market.

Mobius visited Japan for the first time in 1960 on a scholarship from Syracuse University. After earning doctorates in economics and political science from the Massachusetts Institute of Technology, he returned to Japan. He also traveled around South Korea and Thailand researching mass communications.

By 1967, Mobius was working for U.S. agribusiness giant Monsanto. He was sent to Hong Kong to research the soy beverage market, later opening his own consulting firm in the territory. In 1980, he joined British securities company Vickers da Costa, opening its liaison office in Taiwan.

In 1987, he got a phone call from investor John Templeton, who asked him to come and work for his company, now called Franklin Templeton Investments. Templeton, a pioneer in globally diversified mutual funds, was looking for someone to manage the world's first listed emerging markets fund.

HANDS-ON APPROACH Managing the Templeton Emerging Markets Fund, Mobius faced new challenges. Initially, the fund had difficulty finding attractive investment targets. It was just before the collapse of the Berlin Wall, and many emerging economies were either socialist or communist. "All these countries were closed [to foreign investors]," he recalled.

Hands-on research has been essential to his portfolio selection process. Mobius believes this approach leads to a firsthand understanding of each country's political and economic structure and its investment regulations.

The next step is to assess a company's long-term value potential. The analysis includes a company's history and reputation, its financial statements, business performance and business plan, and industry trends. "Most important is the human aspect -- the people behind the company," Mobius said.

He and his team track managers' business careers, their experience in a given field and strategic ambition. "Unfortunately, financials can be authored and fixed according to the will of the management, to a great extent," Mobius said. "It's very important to understand the motivations of the management. You have to understand how the management is going to approach its internal and external problems." 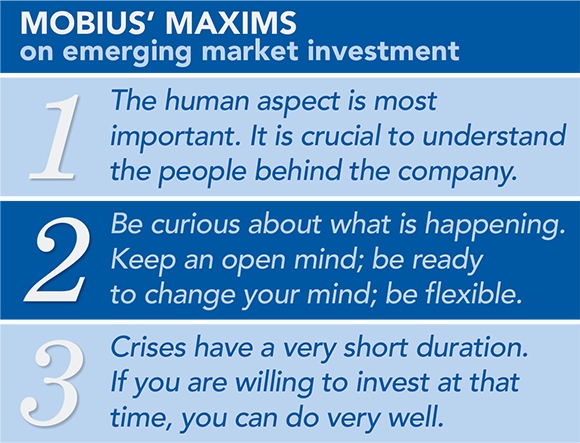 Even now, Mobius spends 250 days a year traveling around the globe to conduct in-person company visits. He has visited more than 70 countries and regions in search of investment opportunities. On his blog, he wrote about an aluminum smelter in Sarawak, Malaysia, where he spoke with the factory manager. During a trip to Poland, he visited a shopping mall to identify consumer trends. He also wrote about Bangkok, where he took a bicycle tour and talked to local residents to learn about what was happening in the Thai capital.

While most emerging market economies have gone through political instability, "as bottom-up investors, it's our job to find individual companies able to survive and thrive in any given environment," Mobius wrote in a blog post.

Asked what is the most important reason for his success, he replied, "Just dedication to hard work and being curious -- the desire to be curious about what's happening, keeping an open mind, being ready to change your mind, not being rigid."

ASIAN CRISIS How did he get over the Asian financial crisis of 1997 and the global financial crisis of 2008? "Crises have very short duration," he answered. Each bear market, in which securities prices fall sharply, has generally lasted a shorter time than the subsequent bull market. Consequently, he recommends buying when investor fear and pessimism are spreading.

Mobius remains optimistic about the world economy and stock markets. As President Donald Trump prioritizes growth, "the growth in the U.S. would probably move forward more rapidly, and that would be good for the world economy," Mobius said. Although some market participants are concerned that Trump's "America first" approach could put a major brake on international trade, Mobius said, "I think it would be just the opposite."

Mobius is also positive about stock markets in the BRIC emerging economies -- including Russia, which is expected to improve relations with the U.S.; China, which is seeking to implement economic reforms; India; and Brazil. Regarding speculation that interest rate hikes by the U.S. Federal Reserve will prompt capital flight from emerging economies, he said, "If you look at the history -- the relationship between the federal funds rate and Emerging Markets Index, for example -- there is no good correlation."

The fund manager is also interested in Trump's idea of giving U.S. companies a tax break to repatriate their foreign cash hoards. If this encourages companies to increase dividend payments using repatriated cash, Mobius expects investors who benefit from a dividend hike to boost their investment in emerging markets.

Mobius is not necessarily expressing support for Trump's policies, but his hands-on approach leads him to accept what is actually happening in politics and formulate investment strategies that reflect the bright side of reality.

As described in his books, emerging market investors need to stay upbeat in order to venture into new territory and find attractive opportunities. But Mobius firmly believes that in the long term, the driving force for global growth will be emerging markets.